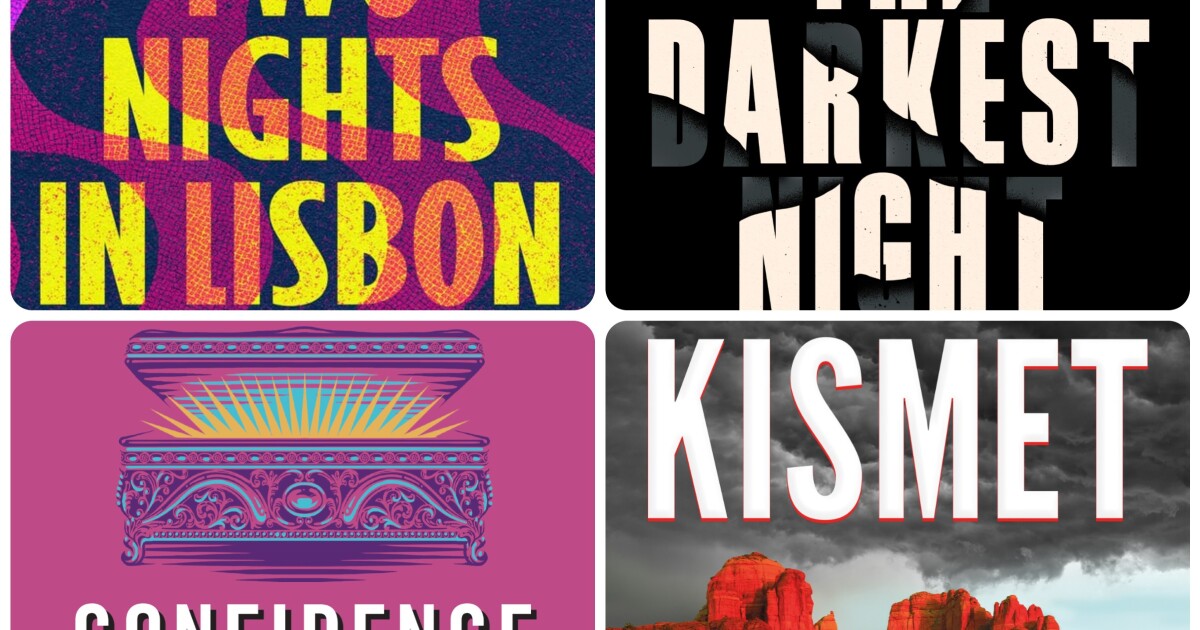 The most anticipated thrillers of the summer

If you purchase linked books from our site, The Times may earn a commission from Bookshop.org, whose fees support independent bookstores.

Summer is here – a time for mystery readers to toss their comfy chairs for umbrellas and venture beyond their living rooms, pandemic permitting. No matter how far you physically move, summer’s crop of mysteries, recent and upcoming, seem tailor-made to take you somewhere else. All of our most anticipated chillers explore territories beyond the everyday, crossing geographic and psychological boundaries in search of the next hot chill.

Over four international thrillers, Pavone has forged a singular style that blends female protagonists, delightfully twisted plots, and thoughtful explorations of modern relationships. Here, Ariel Pryce is a 40-year-old escapee from a former life now settled on a farm in the lackluster terrain of Long Island. She wakes up one hot morning in the Portuguese capital to find her new husband, John Wright, missing. Ariel’s search for her young husband brings her into contact with Lisbon police, the American Embassy and a coked-up journalist before the kidnappers make contact, demanding a ransom of 3 million euros.

What’s going on – most importantly, who Ariel is banging for the money and why – is revealed in mystifying layers of flashback and forward thrust. While there’s a thrill of recognition in the Easter egg that verifies the name of another Pavonian woman on the run, “Two Nights in Lisbon” stands as a dynamic and entirely original story about privilege, power and the price that women pay so that others can maintain it.

Next on our summer getaway is the Terra Alta of Catalonia, an olive and wine region that was the site of one of the most important battles of the Spanish Civil War. The first in a new series of Cercas features Det. Melchor Marín, a man with a hidden criminal past and lover of Victor Hugo’s “Les Misérables”, who was transferred from Barcelona after having foiled an Islamist terrorist attack. Married to a librarian, father of the young Cossette, Melchor has been working for four years as a detective in a place where, swears his colleague, “nothing ever happens”. Then he is called to the home of the elderly Adells, owners of a manufacturer of paper products, the largest company in Terra Alta.

The elderly couple were tortured, murdered and mutilated beyond recognition. Why would anyone abandon the deeply religious and deeply generous owners of a company that employs half the Terra Alta? The answer torments Melchor, and when the case cools, he takes matters into his own hands, with disastrous results for both the investigation and Melchor’s life.

Using Hugo’s convict-turned-businessman Jean Valjean and Inspector Javert as touchstones, ‘Even the Darkest Night’, winner of Spain’s most prestigious literary prize, asks big questions about justice , revenge and whether literature can change lives. The final question is addressed in Melchor’s early years when he asks a fellow inmate if Hugo’s masterpiece is good: “That depends on you”, he replies. “The writer provides half a book, the other half comes from you.”

In a sequel to Mina’s best-selling ‘Conviction’, podcast partners Anna McDonald and Fin Cohen leave a disastrous blended family vacation in south-west Scotland to seek out Lisa Lee, YouTube filmmaker and urbex enthusiast . Lee disappeared shortly after documenting his exploration of an abandoned French castle filled with religious artifacts, including a small silver coffin believed to contain proof of the resurrection.

Amid the clamor of an auction for the rare artifact, Anna and Fin turn their search for Anna into the second season of their “Death and the Dana” podcast. It’s a great setup for another mind-bending, sensible adventure across Europe and beyond. Aided and abetted by a rogue gallery of religious fanatics, Christian billionaires, and deadly parasites, Mina packs in a dizzying (and sometimes confusing) array of surprises. Overall, though, in these two books, Mina has mastered the intricacies of metafiction, not to mention edge-of-your-seat storytelling.

Closer to home, a former fashion editor brings to her second novel — after 2018’s dark comedy “#FashionVictim” — a sight-seeing view of Sedona, Arizona’s feel-good pretensions and a wicked way with one-liners . Its protagonist is the low-key Ronnie Khan, orphaned at a young age and abused as an adult by a controlling Pakistani aunt, who escapes to the land of Red Rock with his life coach and best friend, Marley Dewhurst.

Marley manifests her desire to be Sedona’s greatest healer. But the transition from Forest Hills, Queens is not so easy for good Desi girls who don’t tan. “There were so many ways the desert could kill you,” Ronnie says. “Each new step in the desert (or a well-worn rail that was packed with people most of the time) meant more chance of dying.”

Rattlesnakes and scorpions are the least of the couple’s worries: the area is teeming with charlatans, who have been spotted not only by longtime Sedona residents, but also by area crows; the latter share their POV by telling chapters. These birds see Ronnie as an ally, but they’ve also “communicated” with another woman, encouraging her on her mission to “get rid of everyone who’s ruining this little piece of heaven.”

First on the list of naughty birds is Matt Ford, whose remains Ronnie and Marley find on a popular hiking trail. Next comes Fiona Healer (née Lawrence), another work whose body is covered in honey that the animals devour. Marley, sensing a media opportunity, forms a security and citizen patrol—the motto: “We want our Sedona back”—and gets away from Ronnie, clinging to a new friend more supportive of his ambitions.

You don’t have to quote crows to know this isn’t going to end well. But the surprises Akhtar has in store upend assumptions about trauma, healing, and the motivations of those who fly to lands they claim to hold sacred.

And three series to catch up

Anthony Horowitz is a screenwriter (“Foyle’s War”) and author best known for his series Magpie Murders and Hawthorne and Horowitz (“The Sentence Is Death”). But he was also asked by the estate of Ian Fleming to flesh out new James Bond novels based on unpublished material. “With a mind to kill“, the third in the series, kicks off two weeks after the conclusion of Fleming’s 1965 “Man with the Golden Gun,” pitting Bond against a group of ex-Smersh agents who brainwash him and the program to kill Mr. Horowitz deftly follows the Bond recipe but adds a dollop of professional self-doubt that reinforces Bond’s character and legacy.

In “wild prey“, the second episode of Brian Klingborg’s Inspector Lu Fei series set in rural northern China, the Raven Valley Township police inspector becomes embroiled in two seemingly unrelated cases – a hunt for animal suppliers exotics for the notorious wet markets and the search for a missing teenage waitress at a club near Harbin.Undercover, Lu follows both leads to a warlord in Myanmar.Klingborg escalates the tension as Lu discovers a deeper plot. The tense thriller with a topical theme is perfect for readers looking for a aware successor to Eliot Pattison’s Inspector Shan Tao Yun mysteries.

In “good night forever(June 28), Times Foreign and Domestic Editor Jeffrey Fleishman penned a fitting conclusion to the Det. Sam Carver series, which across three books thrust Los Angeles into the cool shadows of neo-noir From the moment the LAPD detective arrives at the home of fellow cop and lover Lily Hernandez – which is now a crime scene – he knows it is the work of his nemesis Dylan Cross, a woman who has been implicated in a 2019 double homicide “My Detective.” The Hernandez investigation produces a suspect, but the broken and grieving Carver knows better. His final confrontation with the beautiful Cross certainly isn’t standard police procedure, but it’s as black as it gets. “I’m here in the night at the end of his fork,” says Carver, “knowing that the betrayals we allow ourselves are, ultimately, what defines us.”

Our maritime history | The Manila Times