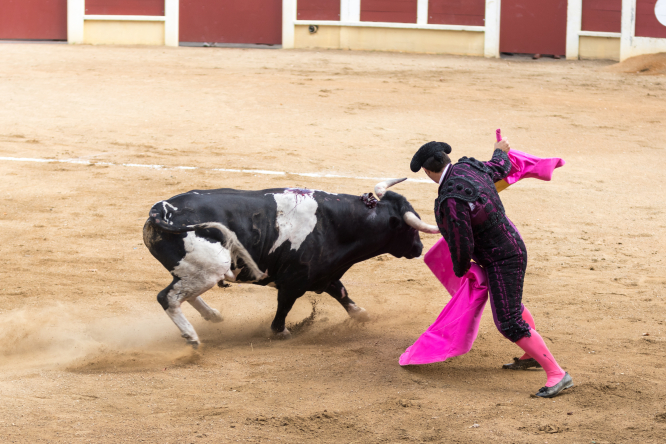 A French MP is set to introduce a new parliamentary bill calling for a ban on bullfighting, which he has condemned as an “immoral spectacle”.

Aymeric Caron is a deputy for Paris within the party La France Insoumise (LFI, left).

He told AFP: “That bullfighting is an immoral spectacle, which no longer has a place in the 21st century, is, I think, a point of view shared by the majority of French people.

“It is a bill that I hope to see debated in the Assembly [nationale] in November.”

Anti-bullfighting sentiment is spreading in most countries that still host the sport, including Spain, Portugal, Peru, Mexico, Colombia, Ecuador and Venezuela.

In France, Claire Starozinski, president of the anti-bullfighting group Alliance Anticorrida, is also seeking to stir up the movement and has launched a media campaign on four television channels to raise awareness about bullfighting.

However, since 2004, no bill has been proposed to the National Assembly in France, and there has been no parliamentary debate on whether to ban the practice outright.

Caron, who identifies as an “anti-speciesist” meaning he opposes the consumption and exploitation of animals by humans, said he was aware that a Part of the challenge with the bill will be winning over members of his own party and gaining allies in parliament.

The deputy plans to change the penal code, which already punishes animal abuse, but which currently has an exception in article 521-1, which specifies that this penalty is “not applicable to bullfighting when a local tradition , old and unbroken can do it”. be shown”.

Mr. Caron denies that bullfighting is considered a “tradition” in France.

He said: “It’s not a French tradition, it’s a Spanish tradition that was brought to France in the mid-nineteenth century to please the wife of Napoleon III, who was Andalusian.”

However, cities in France that feature bullfights, especially those in the southwest near the Spanish border and the Mediterranean, have long said that bullfighting is a tradition for them.

These include: Bayonne, Dax, Mont-de-Marsan, Vic-Fezensac, Nîmes, Arles and Béziers.

Jean-Luc Ambert, a bullfighting enthusiast who travels across France and Spain to watch the fights, told La Dépêche: “Those who want to ban it don’t know it. Bullfighting is a drama, you are close to death. It’s almost an anachronism that it exists, because people no longer live with death.

“We are afraid of it, and yet it is part of life.”

Her friend Françoise said bullfighting is not something they take lightly. She said: “It’s a serious show that we come to see with all the seriousness required. A man is gambling with his life, respecting the animal, and the activists against it don’t understand this.

Christian, a 60-year-old bullfighting enthusiast from Aix-en-Provence, said: “Traditions must be preserved. For me, bullfighting pleases me and I don’t see why I should be forbidden to come and see it.

The president of the bullfighting cultural agency the National Observatory of Bullfighting Cultures said that attempts to ban bullfighting occur with each new legislature.

He said: “We say to political groups: what is the point of associating with this political proposal, which goes against a constitutionally protected cultural freedom and identity?”

MP Caron said he recognizes he will have to rally politicians around his cause in order to get the bill through Parliament.

He said he also did not know if he would receive support from the ruling party, including the leader of the Assembly, Aurore Bergé. In July 2021, Ms Bergé called for an end to the “barbaric practice” in an open letter signed by several centre-right figures.

However, Mr Caron asked: “Will she stick to her beliefs or play a political game that will prevent her from supporting me?”

President Emmanuel Macron lost his majority in the Assembly in June, making it even less clear which way the house might vote.