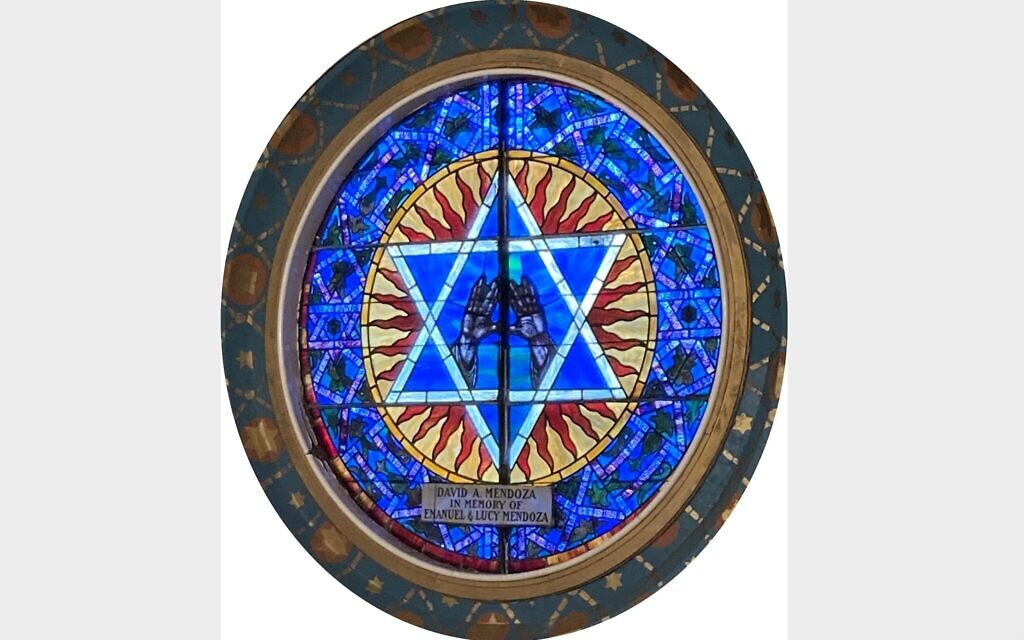 A few months ago, someone came to me at the synagogue and asked me, â€œWho is David A. Mendoza? I knew exactly why he was asking. I had often wondered.

TO Congregation Poale Zedeck, along the eastern wall of the sanctuary, above the arch, there is a large circular stained glass window. It presents the hands of priestly blessing inside a fiery Star of David. A hand-painted plaque is affixed to the glass, slightly off-center. It reads: â€œDavid A. Mendoza, in memory of Emanuel and Lucy Mendoza. ”

My curiosity – and that of my friend too, I think – came from the name of Mendoza. It’s a surname that seemed to go against the strongest currents in local Jewish history.

Mendoza suggests the world of “Western Sephardim”. It was the Jews who remained in Spain and Portugal after the conversion decrees and who then migrated to northern Europe. They were ultimately among the first Jewish settlers in North America. They started arriving in the 17th century and formed communities in New York City, Philadelphia, Rhode Island, East Coast cities, the Caribbean, and Brazil.

They really haven’t crossed the Allegheny Mountains on our side of the state. Our story began with subsequent waves. South Germans, then Poseners arrived in the 1840s, followed by Lithuanians and Hungarians, then Russians, Poles, Galitzianers, Romanians and other Eastern Europeans. The Sephardic population of our region emerged after WWII with the arrival of families from Egypt, Greece, Iran, Israel, Morocco and other parts of the Mediterranean, South Africa. North and Middle East.

These migration patterns can be illuminating, but they can also be blinding. The Poale Zedeck plaque both confirms and complicates the often-told story of our region.

Lucy Levy was born in France and arrived in the Philadelphia area in 1860, when she was little. She was living in Pittsburgh in 1889, when she married Emanuel Mendoza.

He had emigrated some six years earlier from England, where Mendozas had lived for generations. Genealogist Patrick Comerford traced the family back to David de Mendoza (1650-1730) and Abigail David de la Penha Castro (1665-1751). They were part of the generation of Spanish and Portuguese Jews who had simulated conversion and then fled the Iberian Peninsula, joining the large Sephardic community of Amsterdam.

From there the Mendoza branches traveled to the British Isles. One of them included the intelligent English boxer Daniel Mendoza. Another included actor Peter Sellers.

Emanuel and Lucy Mendoza were probably one of the few Sephardic families in Pittsburgh at the time. What little is known about their lives is similar to the lives of other Jewish immigrants in the city. They lived in the Hill District and the Bluff. They sent their boys David and Nathan to the Irene Kaufmann Settlement House for activities.

There were some differences, however. They also sent their children to the Rodef Shalom religious school for their studies, and they stayed with Rodef Shalom when she moved to Fifth Avenue in Shadyside. In 1910, they were living on Zulema Street in Oakland, perhaps to be closer. When their children left home, they moved to Dormont. But they remained members of Rodef Shalom and were both eventually buried in his West View cemetery.

A 1912 newspaper clipping lists David Mendoza among the guests at a birthday party for Celia Hausman. She came from a large Austro-Hungarian family in the Hill district with ties to Poale Zedeck. David and Celia married four years later.

They followed his family to Avenue Negley. There were no permanent synagogues in the East End yet, but there were two growing congregations: B’nai Israel and Adath Jeshurun. Celia Mendoza joined the fraternities of the two congregations.

She was also president of the Poale Zedeck Sisterhood. The congregation was still on Crawford Street in the Hill District, but changes were underway. There was a new rabbi, who would gradually guide the congregation to Squirrel Hill over the next decade.

Celia Mendoza held the leadership position for nine years, aiding in this effort to move the congregation to a new synagogue in Shady and Phillips. Fraternities have always played a fundraising role. Whatever financial conversations have taken place between her and her husband, they have taken place far beyond the scope of the archives, but the result is known: her husband dedicated the most important plaque in the new synagogue – a plaque that casually reflects a mix of Jewish ethnicities, ideologies and geographies. . PJC

Eric Lidji is the director of the Rauh Jewish Archives at the Heinz History Center. He can be contacted at [email protected] or 412-454-6406.

Chad Prather is tired of mandates and Texas tyranny