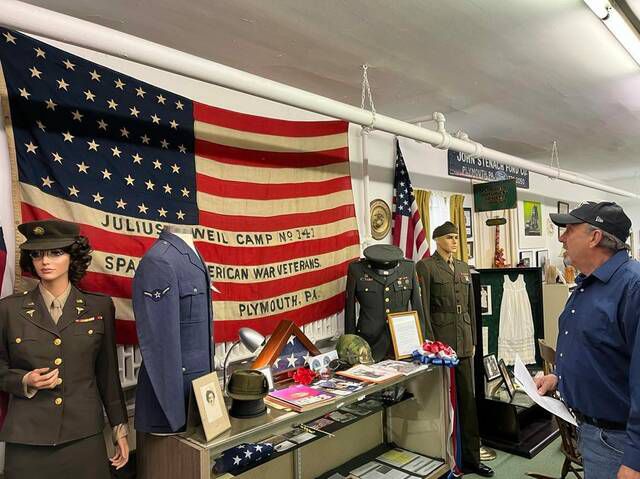 On display at the Plymouth Historical Society is a 45-star banner bearing the name of Julius Weil, who fell at San Juan Hill

PLYMOUTH – There’s probably no one living in the United States who really remembers when the flag had 45 stars, as it did between 1896 and 1908.

Similarly, the Spanish-American War of 1898, which lasted three months, today accounts for only a few paragraphs in the country’s textbooks, with just under 400 American soldiers killed, around 1,600 wounded and slightly more. 2,000 deaths from disease.

While the result established American power in the Caribbean for generations, the war lives on in our national memory mostly, perhaps, for the bravery of the volunteer Rough Riders – including second-in-command Theodore Roosevelt – and their legendary charge. on the hill of San Juan in Cuba, one of the decisive battles of the conflict.

Among the 144 Americans killed in this battle was Julius B. Weil of Plymouth.

His memory and name lives on today at the Plymouth Historical Society, thanks to a donation from a man from Bucks County.

One of the most significant items on display among the society’s collection of military artifacts is a 45-star flag that belonged to a group of veterans named Weil.

Similar to a post in the VFW or the American Legion – or earlier Civil War groups – Julius Weil Camp No. 141, the Hispanic American Veterans, brought together those who had served the nation in arms.

His name is printed on the flag, making this version of Old Glory particularly rare, said Steve Kondrad, chairman of the historical society’s board.

The flag was donated to the society by a Quakertown man, who neatly folded it into a drawer.

“He was just glad someone wanted him,” Kondrad said.

Kondrad believes the flag was flown at camp meetings at the old armory that once stood on Gaylord Avenue, not far from where the historical society now stands.

According to contemporary newspaper reports, Weil was 27 when he was killed by Mauser rifle fire on July 1, 1898 in Siboney, Cuba. A clipping of this article can be read with this story on timesleader.com.

Weil had been ‘one of Plymouth’s most prominent young men’, the article says, the son of Max Weil, who ran a meat market in the borough.

Kondrad said the Weil name has been known for generations, including a later Dr. Weil and a women’s store under the family name.

Of course, the flag is just one of many treasured memorabilia kept and displayed by society. They range from Civil War photos and relics to items left at the Healing Wall when this monument to American Vietnam War dead visited Plymouth in 2019.

According to the company’s Facebook page, last week they took possession of military items that had belonged to two Plymouth servicemen: PFC Frank De Franco and PFC Fred Mahoney, both of whom made the ultimate sacrifice for our country during the Second World War.

For more information about the company and its activities, visit the group’s Facebook page; its website, https://www.plymouthistoricalsocietyluzernecopa.org/, or call 570-779-5840. Its archives and museum are located at 115 Gaylord Ave.

Creature from BOO! will host 2022 Halfway to Halloween Dance-Off on May 21 – The Observer