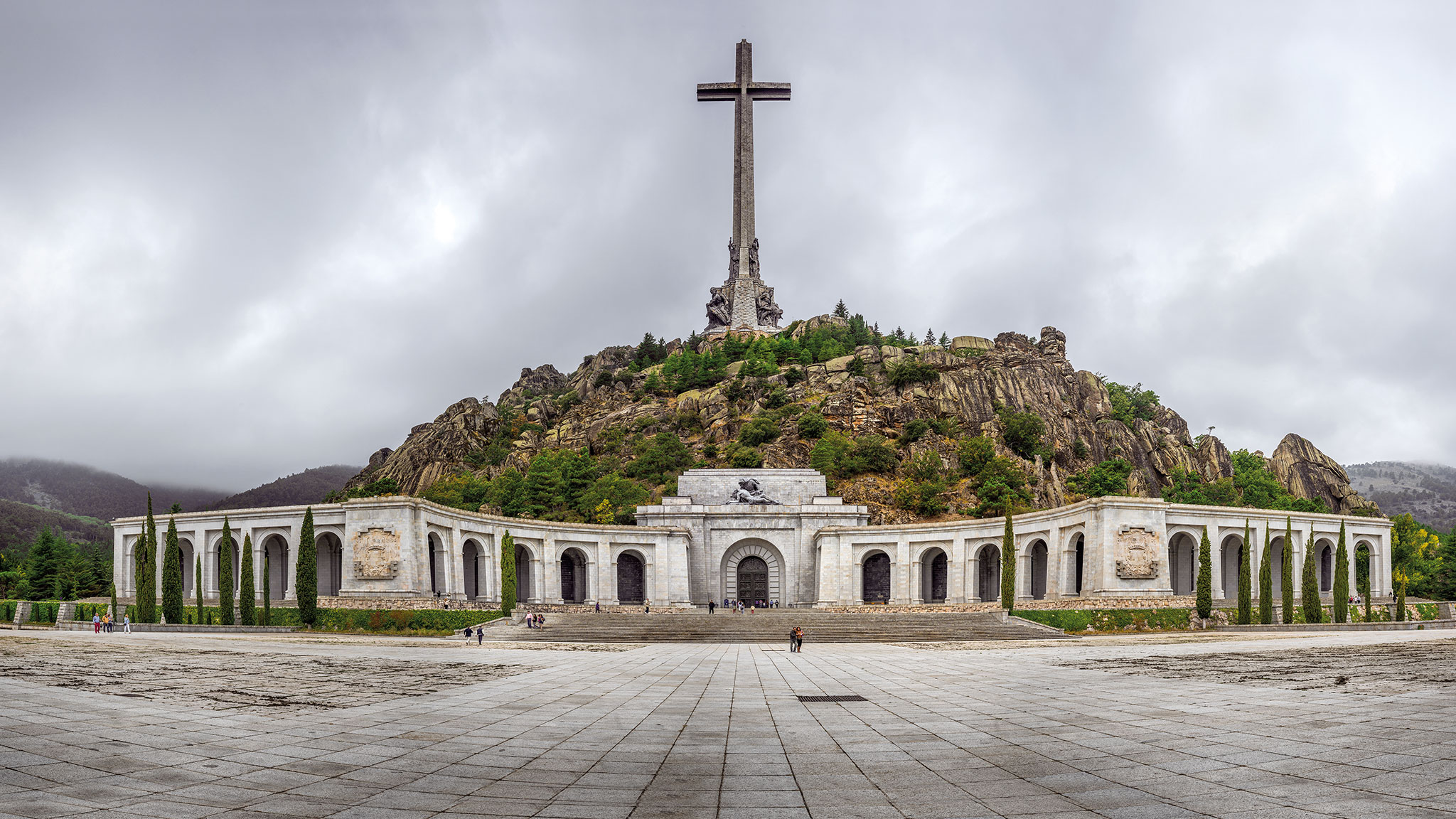 It’s Thursday, 11 a.m. at the Valley of the Fallen. A skinny middle-aged man in a yellow t-shirt and black fanny pack waits for staff to allow visitors to approach Francisco Franco’s grave. The rosary has just ended with the words â€œfor Spain, its youth and its familiesâ€. As Mass goes on, the abbot evokes the martyrs of which he and his Benedictine colleagues are the guardians. The humidity, which makes the walls sweat, rises to our bones as we wait behind the cordon for the end of the service. In the vaults of the crypt below, there are more than 20,000 victims of Francoism buried in the same humidity. The chants of the monks and the strong smell of incense add to the oppressive atmosphere. Finally, the mass ends and we are introduced to pay homage to the dictator.

Spanish history can be understood through the funeral rites of its protagonists. The great Spanish writer Federico GarcÃ­a Lorca was left to rot in an unmarked pit in the hills outside Granada after his assassination by the Phalangists. Meanwhile, the man responsible for his murder, the Spanish dictator Francisco Franco, rests in a mausoleum worthy of an Egyptian pharaoh. It is a fate quite different from the glory accorded to other fascist dictators in Europe. Mussolini was hanged outside an Esso gas station near Milan, while the body of Adolf Hitler was burned along with that of Eva Braun in a crater that is now the sandbox of a Berlin playground. But Franco resides in an abbey built by Republican slaves and maintained by public money. And it is not a hazard. Spain was a fascist anomaly in post-war Europe, which built its democratic order with a strong anti-fascist component.

Work on the Valley of the Dead began in 1940, a year after the end of the Spanish Civil War, when Franco issued two decrees declaring the need to honor those who had given their lives in the â€œglorious national crusadeâ€. Built deep in a mountain in the Sierra de Guadarrama, sixty kilometers from Madrid, the massive complex houses the bodies not only of soldiers of the fascist army but of thousands of Republicans who were buried there without the permission of their families. Its 150-meter cross, which stands atop a mountain peak, can be seen all along a long stretch of the La CoruÃ±a motorway, one of the busiest roads in the country.

The dictator chose the site during a hike in the Sierra with General Juan MoscardÃ³. Its proximity to the El Escorial monastery, the historic resting place of the Spanish kings, was no accident. Franco had hoped that work on the project would be completed on April 1, 1941, the anniversary of his victory in the Civil War, but the paid work provided by construction companies San RomÃ¡n, Huarte (now OHL) and BanÃºs did not could finish it. on time. As a solution, the “Redemption Through Labor” program deployed Republican prisoners as slaves on the construction project. With their involvement, the complex was finally completed in 1958, after a delay of over seventeen years.

Today, the new Spanish Prime Minister Pedro SÃ¡nchez seeks to end the use of the basilica as an excuse for the Spanish genocide. His Socialist Party (PSOE) government has promised to remove Franco’s remains and those of 1930s Phalangist leader JosÃ© Antonio Primo de Rivera by the end of the summer. The idea is to transform the complex into a place of historical memory and reconciliation. Since the transition to democracy at the end of the 1970s, the PSOE has spent more than twenty years in power without daring to bring down this symbol of fascist triumph. The speed of their announcement surprised more than one, less than a month after taking office, but it seems designed to take advantage of the current weakness of the right-wing Popular Party (PP) after the fall of Mariano Rajoy. Founded by seven Francoist ministers, the PP is the political heir to the dictatorial regime and has repeatedly hampered attempts to obtain justice for the victims of its regime.

For the more than 250,000 tourists (mostly foreigners) who visit the Valley of the Fallen each year, it can be difficult to understand why the remains of Hitler’s only ally to survive WWII lie in such a large memorial. It would be easy to get away with the feeling that someone whose grave receives flowers every day paid for with public funds must not have been so terrible. However, to understand the degree of democratic aberration that results from the preservation of such a monument, it suffices to look at the close collaboration between the Franco dictatorship and the Nazi regime.

On May 11, 1941, an event took place in El Escorial to pay tribute to JosÃ© Antonio Primo de Rivera. The Phalanx led a solemn ceremony in front of his grave in the Valley of the Dead, attended by all Nazi Party staff in Spain, including its highest representative Hans Thomsen, and Gestapo leader in Spain, Paul Winzer. This close relationship lasted until the end of World War II and included a 1938 agreement between Heinrich Himmler and Minister of Public Order Severiano MartÃ­nez Anido. Under his terms, captured German Jews and Communists who had fought for the International Brigades would be handed over to the Gestapo for questioning and deportation to the camps and in exchange Paul Winzer would form the Francoist secret police (known as the Politico-Social Brigade). in torture techniques.

The Franco regime’s role in supporting Nazism could make it difficult to understand the existence of the Valley of the Dead, but unlike Germany, Spain has never gone through a process of historical revision or truth and reconciliation. to come to terms with his past. Indeed, the location of the remains of more than 114,000 Republicans killed during or in the aftermath of the civil war remains unknown. The most important factor in securing a continued legitimacy narrative for Spanish fascism after Franco was the role played by regime figures in the transition to democracy. Unlike Germany or Italy, where fascist regimes were defeated, Adolfo SuÃ¡rez, the first Democratic Prime Minister of Spain, had previously been Franco’s minister.

Led and directed by profascist oligarchs, the 1978 transition ensured that democratization took place within a framework that did not endanger their network of power and patronage. These narrow parameters were evident in the 1977 Political Reform Law, which provided for the progressive concession of political freedoms while ensuring the continuity of regime structures. Above all, the Franco army remains a decisive political force, the Spanish democracy always developing under the threat of its intervention. The existing justice system was also left largely untouched and it took decades for the police force to undergo anything resembling a democratic reform process. At the same time, the Spanish right, under the leadership of Manuel Fraga, has pledged to ensure that the historical and cultural legacy of the dictatorship is not betrayed.

As I approach Franco’s grave, an assemblage of fresh flowers sits atop. Nostalgic for the fascist era crowd around the tomb, mingling with tourists. A Japanese group visiting the abbey focuses on the frescoes in the dome, ignoring the vigil at the tomb of a dictator. But then an older man next to Franco’s marble tablet breaks the mirage, giving a military heel followed by a fascist salute. He encourages another man, who kneels down and begins to pray by the grave, then stands up and raises his hand to the sky. He remains standing for a few seconds, then leans in to kiss Franco’s name engraved in stone. Throughout this scene, the volunteer in charge is simply telling visitors that no photographs are allowed. I sit on the floor in a corner, trying to collect my thoughts and write a few lines. The volunteer berates me, “Have a little respect” and tells me that I cannot write here. Everything about this aberration is a metaphor for Spain.