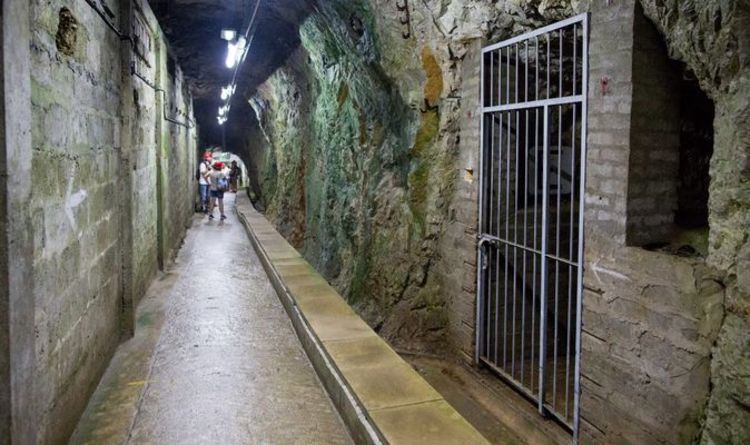 A network of tunnels began to be built in The Rock in the 1700s. The most intensive tunneling took place during World War II and by the end of the conflict the complex system was approximately 52 kilometers in length.

The tunnels were built by the British Army as part of a plan to keep control of Gibraltar.

Gibraltar authorities have now cleared some tunnels and vaults to store supplies in case a Brexit deal is not reached.

Gibraltar’s Deputy Chief Minister Dr Joseph Garcia told the Telegraph: “This should increase our storage capacity from something like two days to two months.”

He added that some caves were “the size of cathedrals.”

Gibraltar is not covered by the Brexit trade deal between Britain and Brussels last December.

A last-minute deal was struck to avoid a hard border in Gibraltar.

Talks are currently underway between the UK and the EU on a permanent post-Brexit deal for the peninsula.

The Rock, which is located off the southern coast of Spain, has been a British Overseas Territory since 1713.

READ MORE: Gibraltar won’t give up ‘an inch’ on sovereignty

Some 15,000 workers move every day from Spain to Gibraltar and disagreements over an agreement center on border arrangements.

He said that while he was chief minister, “no Gibraltarian would ever negotiate arrangements which would relinquish British sovereignty, jurisdiction or control over Gibraltar”.

Mr Picardo added: “I don’t have a crystal ball, but I can tell you that the future of Gibraltar – if it’s one thing, it’s three things – it’s British, British, British . “