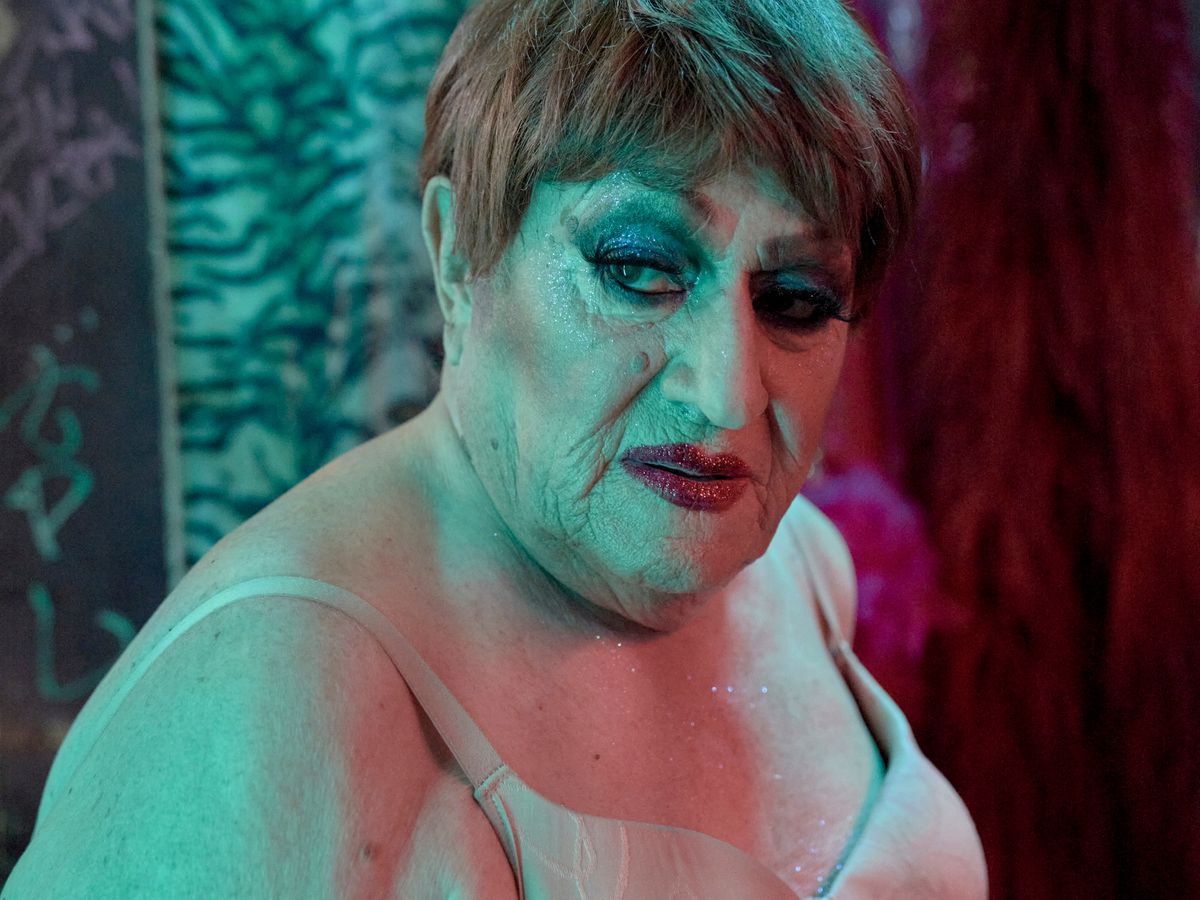 Gilda Love, the 97-year-old drag queen who survived it all: “They cut my dresses with razors, but I just danced in shreds” | Spain

“The neighbors are smiling / from their back windows […] The sissies of the south / Sing on the roof terraces! This verse by Federico García Lorca Song of the Mariquita (Where, sissy song) is the inspiration for the title of a new film by director Enric Ribes: Cantando en las Azoteas (Singing on the roof terraces). A hybrid of documentary and fiction, the film follows legendary Spanish drag queen Gilda Love, an icon of Barcelona Canal – the city’s wild and now nearly extinct underground scene – as it goes about its daily routine in El Raval, a neighborhood in Barcelona’s Ciutat Vella.

Ribes’ feature, released in theaters in July, captures Love’s intimate relationships with her neighbors through her involvement in a neighborhood self-help network, as she struggles to pay her bills with the little she earns. of a small boarding house, and the shows it still gives despite almost a century of existence. “I saw her having a fever of 38 degrees, but she still puts on her dress, goes on stage and completely transforms. It becomes solid and strong. Her feet may hurt, she may be having a bad day, but her passion for art wins out every time,” says Ribes, who has been friends with Gilda for over half a decade.

Born as Eduardo, before Spain proclaimed the Second Spanish Republic in 1931, Gilda Love, 97, has long been a symbol of Barcelona’s legendary queer underground scene. She moved to the capital of Catalonia in 1967, in the last years of the Franco dictatorship, and then never left. After completing his compulsory military service, Love traveled and performed in some of the most famous venues and nightclubs in the world of drag, such as the Madame Arthur cabaret in Paris. She left behind her family, who taught her to live a performance life at a young age – they were carnies and traveled when Love was still a little boy, singing and dancing from town to town. She also left behind her older brothers, supporters of the Spanish fascist Falange party, who had made her life impossible.

“They harassed me all the time, because they knew what I was. I had a sister who was a seamstress and once she dressed me up as a gypsy, because she and my mother said it was pretty and I looked like a girl. My brothers, when they saw me dressed like that, they put a match to my dress and tried to burn me like Joan of Arc. I still have scars on my back. They were horrible to me, but miraculously they never killed me,” Love told EL PAÍS.

Gilda tells her origin story the same way every time, both in film and during her stage performances: She was supposed to be born with a twin sister, but her brother came out first and was strangled by her mother’s umbilical cord, so Gilda continued her sister’s legacy by invoking that lost second half. When director Enric Ribes first heard Gilda tell this story at one of his shows, he was mesmerized and knew he had to meet her. “She is like the storyteller of an almost forgotten generation,” he says. Together they made a short film of five minutes in 2017, also called Cantando en las Azoteas. But Ribes felt that Gilda’s life deserved a much longer and deeper project, so he proposed that they work together on a feature-length documentary, not strictly a biography, but something that, in a romanticized way and with the Using a scenario, could reflect the reality of his daily life. The life she chose. Thus, while Gilda no longer has a relationship with her biological family, we see in Ribes’ film how her neighbors, her community, have become her family.

“All who appear [in the film] is someone she knows in her neighborhood of El Raval. Like the guy who scavenges scrap metal for a living, for example, they’ve known each other for years. I think he even spent a few weeks living in his apartment,” Ribes says. Despite the fact that her house in the film is not her real home – in real life, Gilda lost her home and now lives in a subsidized apartment complex – the film, says Ribes, is based on her daily life. authentic: “Gilda has lost everything. Most of her belongings are gone, except for a few outfits that she was able to keep. When we were working on the short film, I scanned some of her personal photographs – without that , she wouldn’t even have pictures of her mother.Most of the film’s story, in which Gilda spends a few days caring for a six-year-old girl whose parents are going through difficult times, is also based on his real life: “I’ve always loved creating my own family, you know what I mean?” said Gilda. “The film is really well done. It’s very human and it reflects my real life. In my old house there was a boy who lived upstairs and every time he walked up the stairs with his parents he would call me at the door and I would give him cookies and toys. I always had little details like that with my neighbors.

Back to the theater

Behind the scenes of Cantando en las Azoteas benefited from the participation of two of the most respected figures of contemporary Spanish cinema. The editing and advice from Isa Campo were essential, explains director Enric Ribes, co-author of the screenplay with Xènia Puiggros. Campos was the screenwriter of the acclaimed Spanish drama Maixabel, and is highly regarded in the Spanish film world for her expertise in fictional documentary formats, from her work with Isaki Lacuesta on films like Between Dos Aguas. Another of the film’s main collaborators was Pilar Palomero, who won the 2021 Goya awards for directing Las Niñas (schoolgirls) and helped train baby Chloe Romero, the child actor who co-starred in Cantando en las Azoteas. Nevertheless, the dialogue in the film was not pre-written like a screenplay. “We wanted the storytelling to feel natural and not have to learn lines,” says Ribes. “I would invite Gilda and say to her: ‘Do you remember when you told me about…?’ and she would take it from there, because she’s a natural actress. In fact, the appearance of Gilda Love in the film is not her first time on screen: in 2000, she appeared in the Dutch film Yo soy así, which traces the last days of legendary Barcelona nightclub, La Bodega Bohemia. In one of the scenes of Cantando en las azoteaswe see Gilda watching herself perform in the old film, overwhelmed with emotion.

Gilda reminds Enric Ribes of Catalan dancer Carmen Amaya: “She used to sweat a lot when she danced, people said. She had a kidney problem, and because she was stomping and dancing so hard, sweat was draining her system and that’s how she was able to live much longer than she expected. Gilda has the same thing – about how the scene kills her, but at the same time the scene is what gave her such a long life. But Gilda says she derives her longevity from her family: her mother married at 14 and gave birth to a total of 20 children (seven brothers and nine sisters, plus four babies who did not survive) . She lived to be 102 and Gilda’s father lived to be 99. Gilda survived childhood and then decades under Franco’s dictatorship. In El Raval, she found the freedom to be herself through local nightclubs, where she often spent the night to avoid street arrest under Franco. Ley of Vagos and Maleantes – a law used to target vagrants, gay and trans people, sex workers and anyone the regime deemed “anti-social”. “It’s true that people thought differently back then. They were cutting my dresses with razors, but I was going on stage and dancing in shreds. But yes, there was an atmosphere everywhere,” says Gilda.

“She lives in a world of spectacle,” says Ribes. “Yesterday, she told me that she had to get an outfit from a seamstress at the very end of the metro line. She has this very quixotic sensibility, where she lives in a world of foreign places and old Hollywood classics, like Don Quixote with his books of chivalry. His name is an obvious reference to the movie Gilda (1946), which she claims to have seen 13 times at the theater, and she boasts of having once met the star of the film, Rita Hayworth: “She came to Paris with this prince whom she married [Ali Khan] and I thought she was really nice. I approached her, told her I was a fan, and she replied in English, saying how much she loved that I was a fan. I liked her a lot, that slap she was doing [a reference to the famous scene in Gilda where Hayworth slaps Glenn Ford] – which drove me crazy.

Gilda’s memories of old Barcelona also seem to be mediated by the films. As if she were talking about a musical in the style of On the city Where The Demoiselles de Rochefort (The Demoiselles de Rochefort)Gilda recalls a town where “American ships were always arriving, there was a wonderful atmosphere along the Paralelo [the street once at the heart of Barcelona’s nightlife], people were singing from the roof terraces, and the terraces were full. Before, Gilda says, “I used to perform in theaters, in variety shows. They were playing a movie, and then I was on stage. None of this exists anymore. Theaters and halls are almost all closed. But now, at nearly 100 years old, Gilda is back in theaters, starring in her own show in Cantando en las Azoteas.