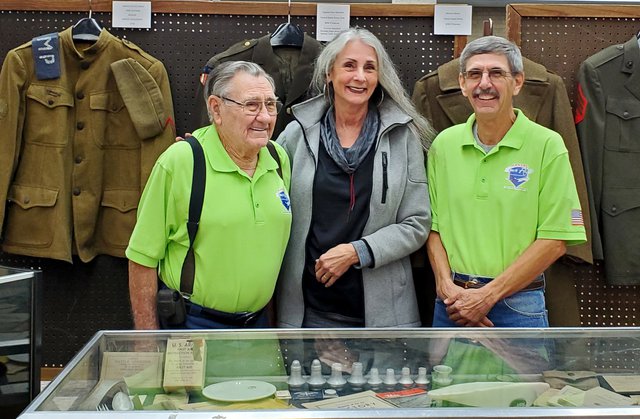 Just in time for Veterans Day, a display of military memorabilia can be viewed at the Great Bend Public Library.

Karen Shaner of Great Bend coordinated the exhibit, drawing on her own family history and finding several other area residents to share family memories and photos dating back to the Spanish American War.

“I’ve had a lot of different people loaning things out,” Shaner said, including her brother, Darwin Schloemer, and Artists at Large member Billie Bonomo.

Shaner held a similar exhibition at the library two years ago was touched by the response. While she was preparing this exhibit, other veterans showed up and shared their stories.

â€œA man brought a uniform and said he was delighted that we were paying tribute to the veterans,â€ Shaner said.

She wanted to bring the exhibit back in 2021 but couldn’t because of the pandemic.

This year, she reached out to even more veterans and their families to find more items. During the Great Bend Airfest last September, she met Kansas Honor Flight volunteers Carl Brant and his son Richard de La Crosse, and they show off the 1944 Cushman Airborne Model 53 scooter that Carl has restored.

Carl, who served in the army in Salzburg, Austria, during the Korean War, was on an honor flight in 2015. Since then, Carl, his daughter Patty Crowell and his son Richard have promoted the group to goal nonprofit that offers free trips to Washington, DC for WWII, Korean War and Vietnam War veterans. Carl’s hobby is restoring Cushman scooters, so they take a Cushman package cart to events like Airfest and hand out ice cream to promote Kansas’ honor flights.

â€œWe think this (scooter in the exhibit) may have been used at the Great Bend airfield,â€ said Richard. Those that were shipped overseas were expelled from the C-47 transport planes and dropped using parachutes or gliders.

Carl said they found the scooter at a friend’s farm south of Rush Center. When he started to restore it, there was little more than the front fork.

â€œWe had to find wheels, an engine and a transmission,â€ he said. He spent six or seven years finding genuine parts and it is now “90% correct”, he said.

Old newspaper articles are also part of the exhibition. Shaner found an old red leather bound book published by the Grand Virage Grandstand to honor WWII veterans. Photos of 34 Barton County men who died while serving in the war are shown.

A World War II “Scrap going to war” poster was placed on railcars carrying scrap metal to La Crosse for use during World War II.

The exhibit will remain at the Great Bend Public Library until the end of the month. Shaner said she hopes veterans and those who honor veterans enjoy the collection.