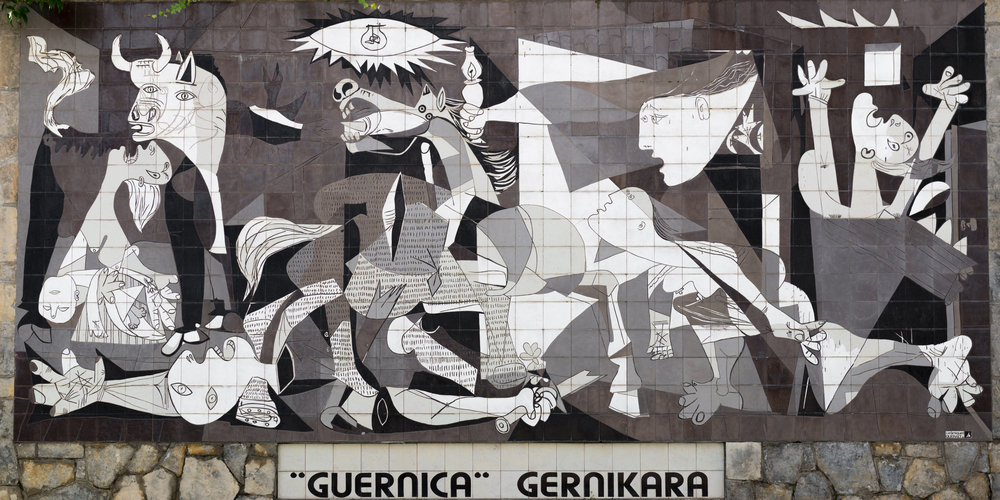 The current bombings of towns and villages in Ukraine are reminiscent of the savage attacks on civilians during the Spanish Civil War. In Picasso’s violent and powerful masterpiece, Guernica, a great artist responded to the cruel slaughter of the innocent. His portrayal of the bombardment of a small town, defenseless and of no military importance, evokes the same shock and horror as the Russian bombs and atrocities committed against defenseless citizens during their invasion of Ukraine.

On April 27, 1937, during the Spanish Civil War, The Times reported the attack on Guernica, a town near Bilbao in northern Spain: “Guernica, the oldest town of the Basques and the center of their cultural tradition , was completely destroyed yesterday. afternoon by insurgent air raids. The bombardment of the open city far behind the battle lines occupied precisely three and a quarter hours, during which a powerful fleet of German planes ceaselessly unloaded on the city bombs and incendiary projectiles. All of Guernica was soon in flames. At the request of the Spanish fascists, 43 German planes killed 1,600 people, mostly women and children (the men had gone to war), and destroyed 70% of the city.

Picasso explained the principles of humanity that inspired his painting: “I have always believed and still believe that artists who live and work with spiritual values ​​cannot and must not remain indifferent to a conflict in which the most high values ​​of humanity and civilization are at stake. . . I clearly express my horror of the military caste which plunged Spain into an ocean of pain and death. Picasso completed the huge 25-by-11-foot fresco in a month of hard work. It was first exhibited in the Spanish pavilion at the Universal Exhibition in Paris, toured Europe to raise funds for the Republican cause, and was placed on extended loan at the Museum of Modern Art in New York. York. It is now at the Museo Reina Sofia in Madrid.

This complex image should be read, like a book, from left to right. The scene is painted entirely in black, white, and gray, and the victims are confined indoors and in darkness. There are six human figures with thick, twisted fingers and wide-open mouths, three of which are screaming. Picasso was passionate about bullfighting and this spectacle dominates painting. He said, “the bull is brutality and darkness, the horse represents the people.” In the center, facing the bull as if controlled by a picador in a bullfight, the horse with muzzle-nose, tombstone teeth, blade-like tongue, ragged mane and fluttering tail howls in agony. Padded but unprotected, the horse is pierced by a matador’s sword and gored with a bull’s horn. Head thrown back, the horse tramples the matador lying on the ground.

At top left, the triumphant bull stands motionless with blade-like ears, a white head, and a blazing white tail. Beneath the bull’s black body, a weeping woman with a drooping bare chest holds her dead baby and stretches her long neck which almost touches the massive bull’s chin. The bull is also dramatically opposed to the woman in the upper right. With flowing hair and a large ghostly white head, modeled after Picasso’s lover, Marie-Thérèse Walter, she slips through a narrow window, stretches out her long arm, and throws herself into the room. She holds a lighted oil lamp behind the horse’s head and under a glowing electric light bulb sun, which is shaped like an eye and pointed eyelashes that radiate like flames. Below her, a bare-breasted woman with a leaning head squats defensively with one leg stretched behind her. She rushes away from the fire consuming the woman in the upper right and heads towards the two high lights.

In the center foreground, a gaping-mouthed matador, lying on his back with severed arms outstretched, is trampled by the speared horse and mortally wounded. Reversing their traditional roles, he is defeated by the bull and holds a broken sword. On the far right, matching the woman with the baby, another woman tilts her head back, desperately throws up her arms and spreads her fingers. Trapped in a collapsing house in the flames that surge above and below her, she cannot escape through the small open window. The two distant lights contrast with the glow of the burning building.

In Picasso’s depiction of defenseless civilians destroyed by overwhelming force, the bull, horse, and matador symbolize bullfighting. The baby and the matador are dead; the horse will die; the grieving mother, the flaming woman and the crouching woman are doomed. As in Francisco Goya’s The Disasters of War, the cruelly tormented victims cry out for help that cannot come. The round-faced white woman, carrying the oil lamp, offers the only faint glimmer of hope. She illuminates the horrors, but cannot save the victims. As WH Auden wrote in “Spain”: “The story of the vanquished / Can say Alas but can neither help nor forgive.”

The Spanish Republicans or Loyalists lost the civil war, just as the Ukraine could lose this war. Spain was oppressed by the Fascist or Falangist regime from 1939 until the death of Francisco Franco in 1975. Picasso called his monumental work, seen from the point of view of the victims, “an instrument of war of attack and defense against the enemy”. It remains a noble depiction of victory in defeat, a human protest against the overwhelming forces of war and death. But his warning has once again been ignored, as Hitler returns in Putin’s guise to destroy Europe’s civilized values.


A message from the article

We’re the only publication committed to covering all angles. We have an important contribution to make, needed more than ever, and we need your help to continue publishing throughout the pandemic. So please donate.