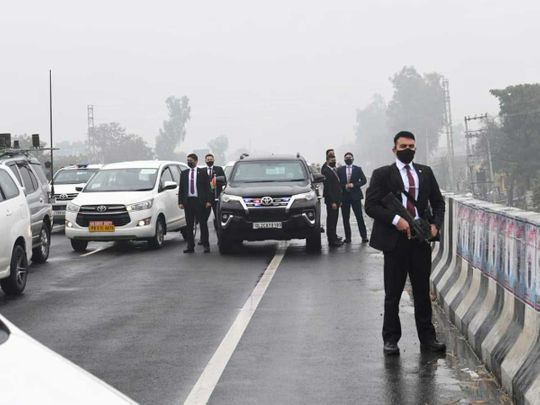 Just that feeling of unease and worry.

These images of Indian Prime Minister Narendra Modi stranded on an airlift in Punjab’s Ferozepur district, on his way to a campaign rally last Wednesday, rekindled the same sense of unease and worry I had during of visiting a New Delhi museum decades ago.

Rajiv’s ragged pair of sneakers and kurta-pajamas shattered by the heinous act of a suicide bomber in 1991 are sure to set your back. Earlier in 1984, then-Prime Minister Indira also had a bloody end, gunned down by her own bodyguards outside her official residence at 1 Safdarjung Street in the capital.

In more ways than one, the Indira Gandhi Memorial is a stark reminder of two deaths – the most gruesome, unfortunate and painful cases of gargantuan violations of VVIP security in post-independence India, aside, of course, the assassination of Mahatma Gandhi.

Modi’s black Toyota Land Cruiser stuck on this airlift near the village of Piareana on the Moga-Ferozepur highway due to a roadblock by a group of protesting farmers was as unhappy as it was worrying.

Those “men in black” from the Special Protection Group (SPG) standing around the prime minister’s vehicle and trying to check out the situation ahead on a rainy afternoon was an extremely preventable scenario – even more so, for a country that had to deal with it. had seen one seated and the life of a former prime minister was cut short due to unforgivable breaches of security protocols.

What is even more unfortunate is the unsavory political debate and counterpoint that has unfolded since the incident last Wednesday.

Common sense and an objective analysis of the incident lead us to this very rudimentary truth, namely: the security of a Prime Minister or any VVIP should always be maintained well beyond the scope of petty politics.

Second, while investigations are still ongoing, it still cannot be denied that in an Indian context, when a prime minister or sitting president visits a state outside the National Capital Region , it is the responsibility of the relevant state administration to ensure that proof of security coverage – in close coordination with federal agencies. This is an area where, at first glance, the responsibility ends at the door of the State administration of the Punjab.

Modi security flaw highlights two very important aspects of VVIP security in India. On the one hand, the question of security details and their logistics. On the other hand, there is the question of circumstantial decorum, where, sometimes, the VVIP in question and its socio-political commitments can prove to be dissuasive in ensuring foolproof coverage.

The moot point here is that the world’s largest democracy certainly cannot afford a counterpoint to the security of its prime minister. Nor can he afford to let political considerations decide the model of the VVIP movements. In Modi’s case, it is virtually impossible that the local administration in Ferozepur had no idea that the protesting farmers created a blockade on the Prime Minister’s road.

And this being the case, the question obviously arises as to whether this information was shared with the Advance Security Liaison (ASL) team. Moreover, if the local administration was well aware that there was a protest blockade on the PM road, why was an alternative route not offered well in advance?

The very fact that the Prime Minister’s convoy was allowed to drive up to the point where there was a roadblock was in itself a huge breach of safety – one that requires liability to be ascertained and exemplary punitive measures to be taken. distributed.

India has lost a meeting and a former prime minister due to massive security breaches and the opacity of political constraints. He certainly cannot afford to let history repeat itself.