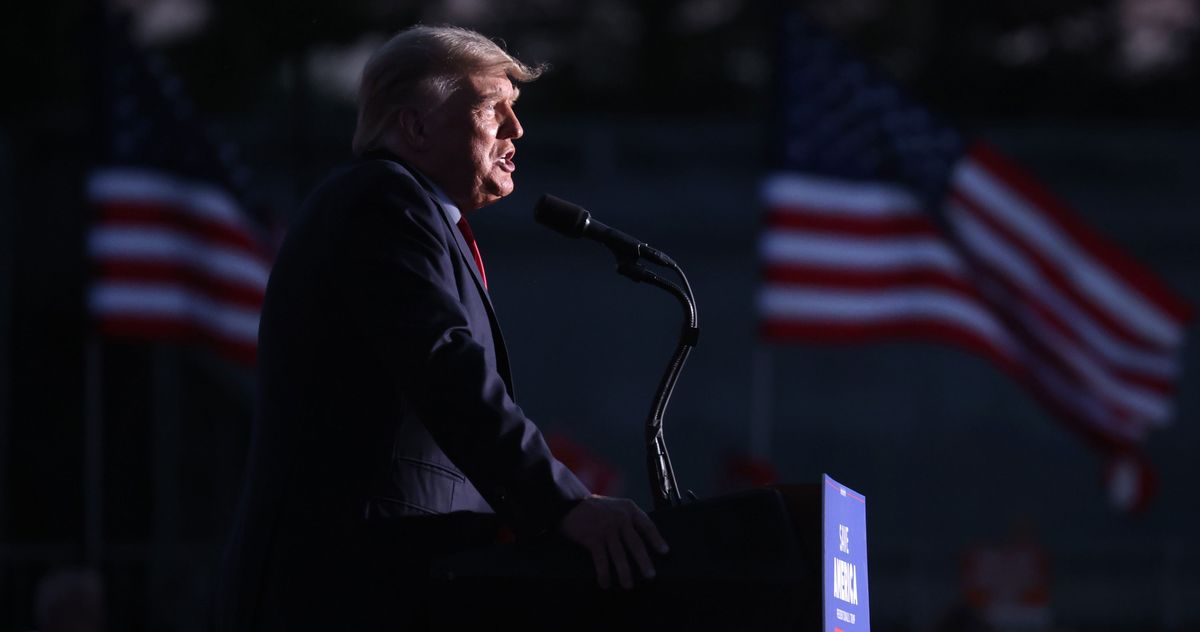 Is it finally time to start calling Trumpism fascism?

The 45th president during an inflammatory speech in Ohio in June.
Photo: Scott Olson/Getty Images

One of the real dilemmas of Trump-era politics has been how to describe the school of thought (or action) led by its central figure. The more evident it has become that the 45th president and his adoring supporters represent more than just a temporary phenomenon or a minor variation on an old conservative theme, the more tempting it has become to compare Trumpism to outward and antagonistic right-wing authoritarian movements. to democracy, which are generally referred to as fascism. This temptation has been felt by Never Trump conservatives anxious to save their own tradition from contamination by the great orange demagogue, and by progressives who wish to powerfully distinguish the threat posed by the MAGA people from the past conservatives they have lamented. By and large, all of us Trump-despising opinion makers have avoided the F-word as a general descriptor. But that may now change.

Beginning in the early hours of November 4, 2020, when Donald Trump began his defiant effort to reverse his hook or crook re-election defeat, the MAGA movement became increasingly explicitly undemocratic and insurgent. There was reason to hope that the ‘fever’ (to use Barack Obama’s usual term for right-wing extremism) might break after Trump was finally forced out of office, or at least ease its grip deadly on the Republican Party.

Instead, in exile from the White House, Trump has become increasingly lying and irresponsible, and despite best efforts by GOP leaders to “move on”, his status as the de facto leader of his party no longer exists. only got stronger. But more importantly, Trumpism is now even stronger than Trump, as evidenced by Republicans’ near-national drive to justify the ‘big lie’ of the stolen 2020 election by working to bolster voters and election officials. in the future, and to instill an atmosphere of cultural panic in the face of wildly exaggerated phenomena like ‘awakening’ and ‘critical race theory’ and ‘cancellation culture’. Put these two developments together and you have a Republican Party determined to delegitimize its opponents, treating them like incorrigible thieves and tyrants, and a threat to civilization and freedom itself.

The fact that we are dealing with something more alarming than the usual politics was pointed out by our current, normally mild-mannered president, who said this in Philadelphia on the Republican double-deal to make voting harder and electoral subversion easier:

For, make no mistake, tyrants and mongers of fear and peddlers of lies threaten the very foundations of our country.

It gives me no pleasure to say that. I never thought in my entire career that I would have to say this…

The assault on free and fair elections is such a threat, literally. I’ve said it before: we face the biggest test of our democracy since the civil war. This is not hyperbole.

Former George W. Bush speechwriter and Never Trumper veteran David Frum Explain how Trumpism has become much more dangerous since its leader left office, especially now that the former president is praising, rather than ignoring or explaining, the January 6 insurgents:

[T]During the Trump years, it seemed reasonable to avoid comparisons with the worst passages in history. I have repeated over and over again a warning against using the F-word too easily, fascism: “There are a lot of stops on the train line to hurt before you get to Hitler Station.”

Two traits have historically distinguished European-style fascism from the more local American traditions of illiberalism: disregard for legality and worship of violence. Presidential-era Trumpism operated through at least the forms of law. Presidential-era Trumpism glorified military power, not mob attacks on government institutions. After the presidency, these past inhibitions quickly dissolve. Ashli ​​Babbitt’s conversion into a martyr, a sort of American Horst Wessel, expresses transformation. Until 2020, Trump had endorsed lethal force against violators: “When the looting starts, the shooting starts,” he tweeted on May 29, 2020. Babbitt also broke the law, but not to steal a television . She was killed while trying to disrupt the constitutional order, to prevent the formalization of the results of a democratic election.

My colleague Jonathan Chait also recently suggested that Trump’s praise for the January 6 insurgents was a turning point for Trumpism and the Republican Party:

The anti-Trump right has called the insurrection overblown, a protest march gone wrong, perhaps thoughtless but never posing a serious threat to the republic. The far-right exposure of Babbitt’s death sends a different message: the insurgency has been good. Babbitt’s effort to penetrate the defensive barrier was brave, and stopping his charge a crime.

By throwing himself behind this message, Trump endorses the most radical interpretation of his presidency. Jan. 6 was no minor misstep after a successful era, as fans like Mike Pence and Lindsey Graham are now saying. It was the heroic culmination of a righteous uprising.

There are other hallmarks of post-2020 Trumpism that carry the stench of fascism. There is the fundamental myth of the stab in the back, which for the Germans generally meant the “betrayal of the nation” during or after the First World War; for the Trumpists, it is the stolen election of 2020. There is the mass petty bourgeois resentment of the “cosmopolitan” elites. There is the fabrication of opponents’ crimes to justify their own, via one Reichstag burning moment after another. There is the cult of the personality of the leader and the machismo of the will to power. And there is the united front, with reactionary religious interests and radical elements among the police and veterans.

Although Frum – and most importantly, yours truly – has used German analogies to bring back the chilling point, it is best to avoid Hitler and his Nazis trying to find precedents for where Trumpism seems to be heading. Except in its neo-Nazi fringe, the MAGA movement is do not guilty of anti-Semitism at all (he is, in fact, deeply pro-Israel), which is no small thing compared to the fascist movement in which exterminationist anti-Semitism was absolutely central. And while I’m afraid that, given full power to do whatever they want, the Trumpists would love to beat or jail BLM or feminist or suffrage activists with hated members of the media, I can’t imagine that they have genocide in their bones. There is wisdom as well as caution in the Jewish community’s resistance to any Holocaust or Nazi analogy that belittles the significance of what happened in German-occupied Europe.

Frum seems to think Argentina’s Peronist movement is a good example of the spirit and trajectory of Trumpism:

After Perón lost power, Peronism became the myth of a lost golden age – a fantasy of restoration and redemption – and still a rejection of the frustrations of normal politics, the boredom of legality. Who needed policies when the solution to every problem was a magic name? Politicians hoping for the blessing of the former leader trudged to his place of exile, were photographed with him, and then sabotaged by him. The only plan he followed was to somehow impose himself on his country again, one way or another.

Sounds familiar, doesn’t it? I sometimes hear echoes of Franco’s 1936 Spanish military uprising in the Trumpist habit of portraying centre-left politicians and journalists as bent on Marxist totalitarianism and the extinction of Christianity. You could feel Mussolini’s march on Rome during the January 6 insurrection. And Trump’s US foreign policy tilt toward anti-democratic forces is everywhere reminiscent of fellow fascists who justified repression and violence in the fight against the international left. It is true that Trump has no such thing as a systematic philosophy or program of government. But then most fascist movements really started with a leader, a grievance, and a demonized enemy rather than a political program.

Perhaps Trumpism’s drift into something akin to fascism will ease or even reverse, especially as his captive Republican audience comes to believe he can gain power through more conventional means. I’m not sure I believe it until Trump supporters drop the big lie about 2020, stop pursuing anti-democratic tactics and demobilize their, well, fascist rhetoric.

Daily news about politics, business and technology shaping our world.

By submitting your email, you agree to our Terms of Use and Privacy Notice and consent to receive email correspondence from us.

Can’t repay a personal loan? What should you do? Here are your options