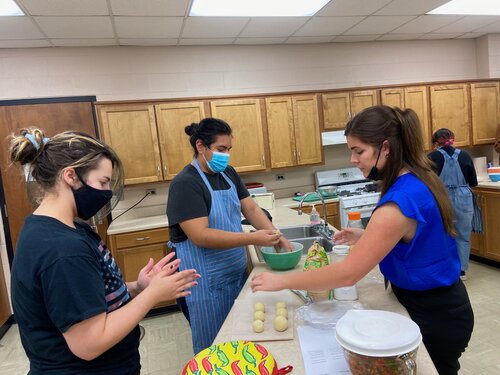 A Hispanic cooking demonstration might not be the first thing you associate with an advanced Spanish composition course at WKU, but that’s exactly what the students of Dr. Pertusa’s SPAN 471 course participated in last week. ! The syntax and structure of the Spanish sentences were set aside to welcome four Hispanic guests who raised their spatulas to demonstrate their favorite house recipes: patacones and mango salad from Ecuador, empanadas from the Dominican Republic, apple omelettes from land of Spain and corn tortillas and pico de gallo from Mexico.

Every two years, SPAN 471 takes students on a culinary and gastronomic journey, reading and writing about the culinary idiosyncrasies of the Hispanic world while exploring the gastronomic delights that Bowling Green has to offer. While learning the inner workings of culinary writing in Spanish, the students collaborate on the creation of two issues of Del plato a la boca. The student-created food culture e-magazine features articles on Bowling Green Farmers’ Markets, the world cuisine featured at the International Festival each year, the color of the season at Jackson’s Orchard, and the delicious flavors of homemade ice cream. from Cheney’s. Farm, among many other topics related to food culture.

“The cooking demonstration is now a classic of the course,” explains Dr Pertusa. She went on to say, “This is the culmination of our many discussions about how food relates to Hispanic culture and its people. After 10 weeks of reading and writing about food from all possible angles and in different types of texts, a cooking demonstration by visiting students from different countries sets the icing on the course cake, making what the students read and write more real.

Professors Julie Lee and Matt VanSchenkhof, Department of Applied Human Sciences, collaborated on the cooking demonstrations, giving their expert advice on food preparation. Also, Professor Melissa Stewart, Department of Modern Languages, donned her apron to serve as the evening’s “pinche” (assistant chef) as needed. “During the demonstration,” recalls Professor Stewart, “the students went from station to station, heard about the food, preparing it, and then tasting it. Afterwards, the group tried dishes that the members of the the class had prepared at home to share them equally. Half the group was made up of Latinx students from different places, so there was a lot of sharing of cultural practices and language differences all around. It was, as always, very lively and stimulating for everyone. “

After some missteps, Ashley Judd says Time’s Up is ready to “get it right”