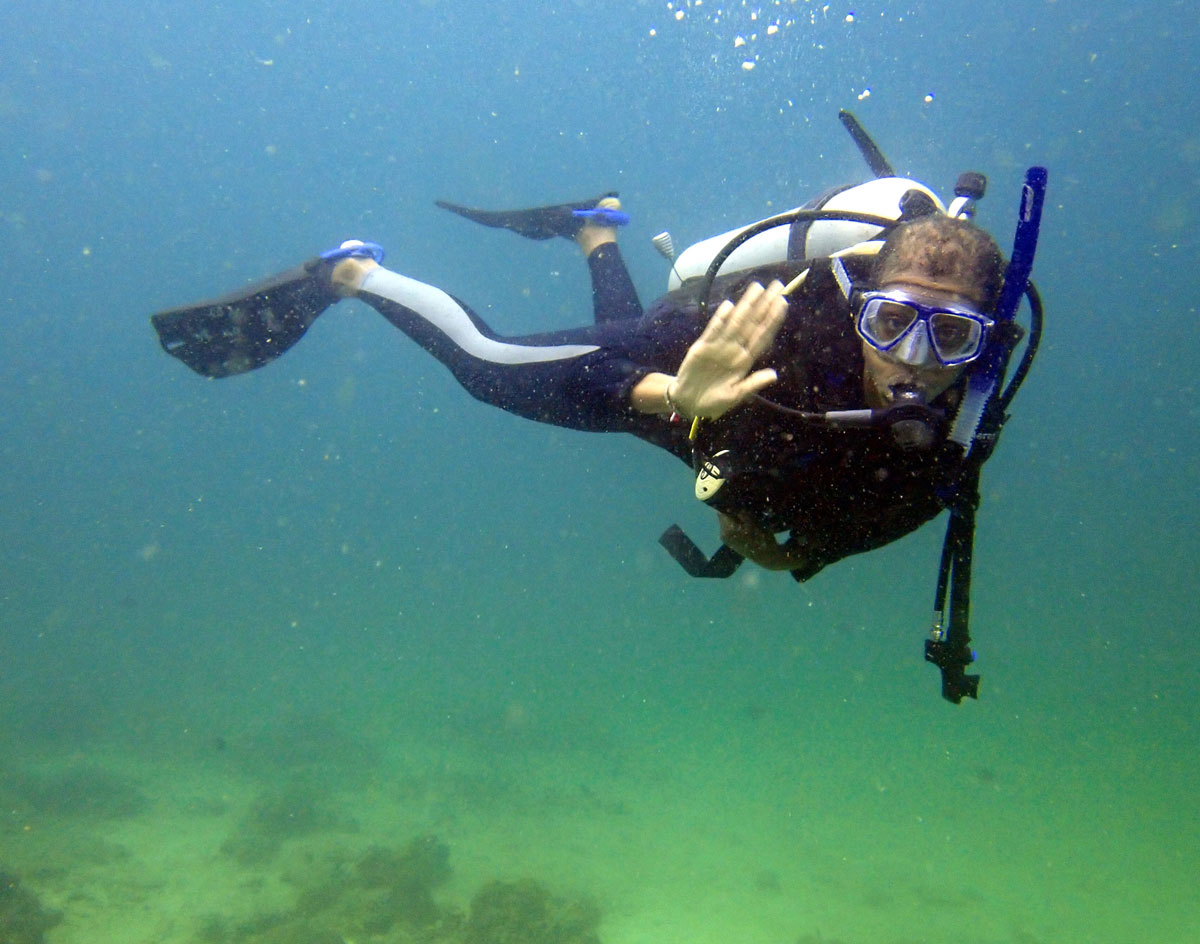 Tara Roberts is not afraid of depth. The journalist and Atlanta native cut her teeth in publications like Essence and Cosmo Girl magazines before deciding to travel the world and write stories about changemakers and social entrepreneurs. She has spent the past few years tracking and diving with black divers as they document slave shipwrecks around the world. She describes the ocean floor as peaceful, meditative and magical – “like being an astronaut walking on another planet”.

As a National Geographic explorer and storyteller, Roberts told these stories in her six-part podcast series, Into the Depths, and in doing so, found a way to honor the lives of lost ancestors. Below, she talks about what inspired the project, the global impact of the slave trade, and how uncovering world history led to discoveries about her own family line.

Your introduction to these diving missions began with the Diving with a Purpose organization. Tell me more about what inspired you to pursue this story?
I lived in DC and went to the National Museum of African American History and Culture. I saw a photo of a group of mostly black women on a boat in wetsuits, and I’ve just never seen a photo of a group of black women in wetsuits before. So that stopped me. I found out they were part of this group called Diving with a Purpose, and part of their mission was to research and help document slave shipwrecks. I was like, What? Are there people who look like me doing this? It really spoke to me and captured my imagination.

Diving with a Purpose is full of volunteers who do this work. Nobody gets paid for that. They are just ordinary people who want to go scuba diving. Anyone can participate – just have an interest in scuba diving and be prepared to take some training.

You not only talked to these divers, but you took the training, went to the depths of the ocean and helped uncover history alongside them. Why was it important for you to be so completely immersed in this process?
I didn’t want it to be a story of him/her/they; I wanted it to be some sort of me/us story, and the only way it would be if I was a part of it too. It was important for me to touch and confront this story myself, to go underwater and feel the atmosphere of the ocean, and to know what it is like to discover the story. I wanted to know what it would look like for me, what impact would it have on me. Would that change anything?

I think there’s a certain power in being able to tell a story about the story that directly affects you. A lot of our historical stories, especially about the slave trade and slavery – especially the ones in the mainstream history books that we grew up with – it’s always strangers telling them or someone who is also not black telling this story. But I thought it was really important for me to also talk about this story from my own lens.

Some would say it’s time for the nation to drop the conversations about slavery. There is sometimes an attitude of, We know, it happened, move on. Why is it important to revisit this story?
Well, I would say most people probably know very little about the slave trade. The slave trade itself is different from slavery – from what happened once people arrived on the shores. For example, there were 36,000 voyages that brought 12.5 million Africans to the Americas over those 400 years. Experts estimate that up to 1,000 of these ships were wrecked, but so far less than 20 have been found. Already you have this huge amount of history that just hasn’t been discovered.

Many people might think, Oh, it’s black history, whatever. This is not black history. We are talking about four continents involved in this trade for 400 years: Europe, Africa, South America, North America. The slave trade was one of the most monumental events in human history. Entire landscapes have changed. Wealth was built, wealth declined. Powers have risen, powers have fallen.

There’s so much to unpack, but because we approach it with so many emotions – so much shame, so much guilt, so much anger – there’s a way we can’t look at it.

What was the hardest part of training to do these dives?
So there’s the scuba diver training, which is its own thing, and then there’s the training to map wreckage. And all of them have a math element to them. And the weird thing is, I was good at math in elementary school, but those days are over! I am no longer exact. I am not.

This is why many divers come from more technical backgrounds. [Some of my] the instructors were engineers or civil servants. There’s a kind of right-brain leaning mindset, and I found that to be difficult for me. I also have trouble equalizing my ears; I still struggle with that, so it takes me a little while to really get down.

In episode 3, you travel to Costa Rica and meet a team of young divers from the community who are diving themselves. What does it mean for a community to be involved in discovering its own history?
What often happens when archaeologists, historians or even divers from outside the community come to a place to do this work, they leave and take their research with them. They publish it in journals that the community doesn’t have access to, and none of the funds that might be generated go back into the community.

But now in Cahuita there is a museum that the community has set up with artifacts from the dive. The University of Costa Rica worked with Sea Ambassadors to create a degree program around diving so that more people in the community would learn the skills to do so. Some of the young people have founded an organization – walking tours of Puerto Viejo – and they offer tourists tours that include snorkeling and share more about the shipwreck. The National Museum of Costa Rica is preparing an exhibition on shipwrecks in Puerto Rico. A number of divers who started at age 14 and are now 21-22 are considering careers that include diving or the ocean in one way or another. And, finally, María Suárez Toro [the journalist and educator leading this project in Costa Rica] insists that the community comes first; she insisted that the young people who participated in this research be listed as authors on the articles generated by this research, in order to give them the necessary references to be seen by the outside world.

In the latest episode of the podcast, you start researching your own family history and learn more about your great-great-grandfather Jack. Since the end of the podcast, have you continued this research? New discoveries?
My uncle just called me, actually, and said he thought Jack’s son might have fought in the Spanish Civil War too! We need more information to confirm this, but it’s going to take a lot more time and energy to really do more legwork. What the genealogist began to do was [looking for] any information that might lead us to Jack’s parents, and we haven’t gotten there yet. If we manage to find this document, it could list his mother and father, which would perhaps take us back to the 1700s, which would be incredible!

Do you have any advice for someone who wants to research their family tree but doesn’t know where to start?
There are associations of African American genealogists all over the country who are passionate about African American history and can be hired if you have the funds to devote to it. Sometimes it’s a good idea for the family to get together to pay for a genealogist. But the first thing you need to do is talk to the elderly in your family and get those stories before they disappear and those stories are lost forever. This is the free way to do it.

You mentioned how many emotions are involved in our understanding of the slave trade. What did this story teach you about the process of healing from such a difficult story?
Many of the stories we tell center around the pain and trauma of the slave trade, and so it’s almost impossible to see individual lives and see the humanity inside of these people. I would say that’s what’s missing in these stories, and if humanity is missing, then how do we heal? How can we really connect with what happened in the past? How do we go beyond focusing on pain?

my mother had [a] picture of Jack on the wall for years, and I just walked past. He was born in 1837 and [I’d think], No, it’s just too much. But then to find out those details about Jack – that he was an activist, a soldier and a real estate investor! I also found out that he might have a speakeasy. And I don’t know what happened in that speakeasy! (Laughs) I’m sure it was all sorts of unsavory stuff, but I love it. That means Jack was human. His life was not just about slavery. It wasn’t just about the horrors. There was life inside of it and it gives me something to connect to. This is what is available to all of us as we ask more questions.

When we take the moment to acknowledge and honor [our ancestors], it heals something inside of us, a wound that I don’t think many of us even know is there. There is a possibility of resolution, of completion.