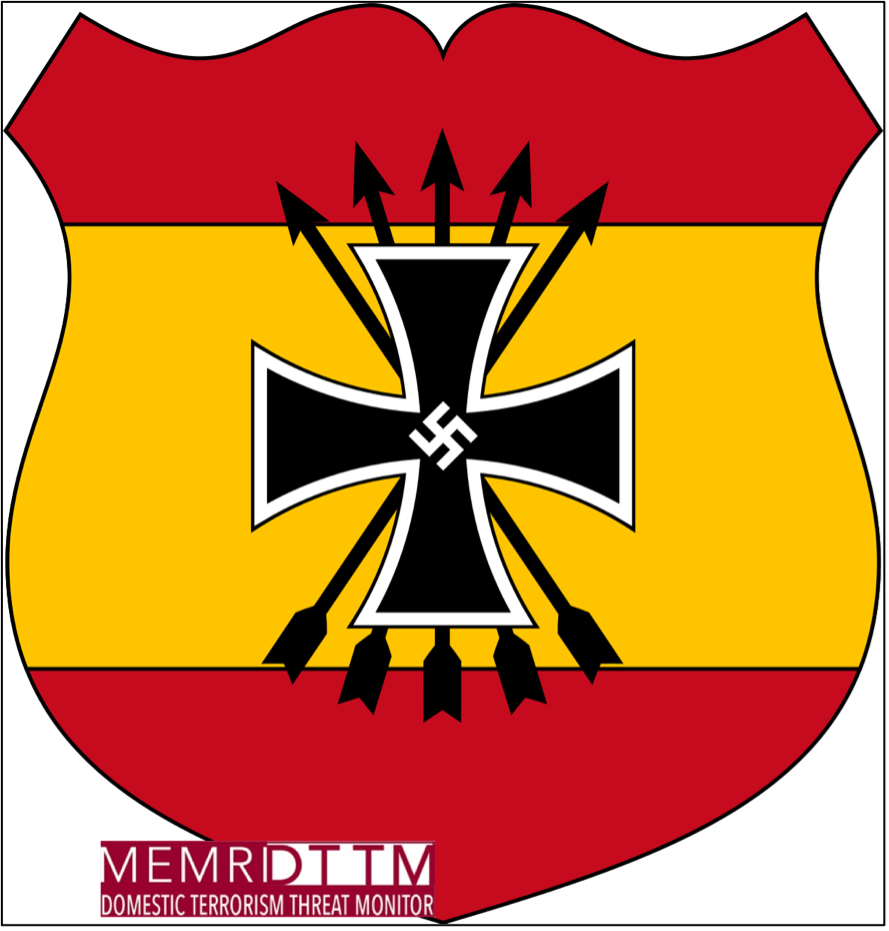 On February 13, around 300 neo-Nazis gathered in Madrid to commemorate the Spanish Volunteer Division, also known as the 250th Infantry Division or Blue Division. The Blue Division was a unit of Spanish volunteers who fought alongside Nazi Germany on the Eastern Front. The event took place at La Almudena Cemetery on the 78th anniversary of the Battle of Krasny Bor, where 2,000 Spaniards were killed. The event was planned by the Madrid-based neo-Nazi Juventud Patriota (“Patriotic Youth”) and was attended by several groups, including the fascist political parties España2000 and La Falange, whose leader Manuel Andrino attended the march .[1]

During the march, participants were seen carrying a banner that read: “Honour and Glory to the Dead” and a quote from “Hymn of the Blue Division”, a song composed to honor the soldiers: “To a dark world we carry the sun, in an empty sky we carry God.” A Telegram user posted links to a Google Drive folder containing photos from the event.[2]

Flags of the fascist political party España2000 were present during the march.

Members of the Legion Motorcycle Club of Madrid also participated in the event.

At the end of the event, attendees left flowers at an obelisk in La Almudena Cemetery that commemorates those who died fighting for the Blue Division. On the flowers there is the badge of the Blue Division, the colors of the Spanish flag, an iron cross, a swastika and the bundle of arrows used by the regime of Spanish dictator Francisco Franco.

Speakers at the event

Javier Utrilla, a local priest, denounced communism at the event saying: “Without a doubt, Marxism, yesterday, during the Second World War, and also today, wants to disturb the peace of our society, to disturb peace of our minds and, above all, keep away the prince of peace, our Lord Jesus Christ.”

Another speaker was Ignacio Menéndez, the lawyer for far-right terrorist Carlos García Juliá who in 1977 helped carry out an attack that killed five union activists. García Juliá was released from prison in November 2020.[3] In his speech, Menéndez called on the crowd not to follow the COVID-19 restrictions, saying: “It is necessary that you violate the curfew, that you meet your family and friends, that you are more than six as we are here today; and you hug and sing and live happily. Because fascism is joy. Later in the speech, Menéndez said: “Sooner or later, when we give our lives, comrades, we can only say that we do not come empty-handed and that our honor is called fidelity, shout with me: Hail Spain , hail Europe” saluting the Nazis as the crowd joined in.

Benigno Maujo, president of the Defenders of the Brotherhood of Oviedo, a Spanish fascist organization, gave a speech in which he said: “There is nothing we should be afraid of, like the best of us, our honor is fidelity, and like the best, on our shields we have the message attention, comrades, salute Spain, salute Europe!

The speaker who attracted the most attention in the days following the rally was 18-year-old student Isabel Medina Peralta. Medina Peralta is the director of the recently restored Seccion Nacional Femenina (“National Women’s Section”), the women’s division of the Falange political party that was disbanded after Franco’s death. Medina Peralta also has ties to other far-right groups such as the neo-Nazi Bastión Frontal (“Front Bastion”) and wrote for the fascist magazine La Conquista del Estado (“The Conquest of the State”) .[4]

During his speech, Medina Peralta said: “It is our supreme obligation to fight for Spain and for a Europe now weak and liquidated by the enemy, the enemy who will always be the same, although with different masks: the Jew. Because nothing is more certain than this statement: the Jew is guilty, The Jew is the culprit and the Blue Division fought for them. They wanted to liberate Europe from communism. Jewish invention to pit workers against each other In the days following the march, Medina Peralta’s Twitter account was suspended and its Instagram page deleted A criminal investigation into anti-Semitic remarks made during the rally was opened by the floor.[5]

At the cemetery, attendees gave Nazi salutes and sang various songs including ”Cara al Sol [Facing the Sun]which was Franco’s party anthem, and “Primavera [Spring]”, the fascist Spanish version of a Russian song sung by Spanish soldiers who fought for Nazi Germany. In January this year there was controversy when a video emerged of Spanish soldiers singing the song and giving Nazi salutes in their barracks.[6]

On Telegram and 4chan, neo-Nazis and white supremacists reacted positively to the march. Far-right French channel Ouest Casual Telegram has published several posts about the march, including one on February 14 of four images which the channel says show different groups who attended the march. The first image of the neo-Nazi group Bastión Frontal.[7]

Another image is also that of a group of hooligans, the Ultras Sur supporters of Real Madrid.[8]

The final image is that of the Spanish neo-Nazi group Getafe Nacional Revolucionario.[9]

The footage was shared on several white supremacist channels.[10] On the same day, the channel also released various other images from the rally. In a comment to the footage, the channel claimed “600 nationalists” attended the event.[11]

The next day, the channel published an image that was allegedly taken during the march. In the image, two women with digitally blurred faces stand in front of the monument that honors the victims of the Blue Division, also known as the 250 Division. The women carry the flag of the Misanthropic Division, a group affiliated with the Ukrainian Neo-Nazi Azov Movement.[12]

Much of the attention has been placed on Isabela Medina Peralta. On 4chan, the picture board known for hosting white supremacist content, seven threads with more than 300 replies were created on February 16 and 17. In the chats, users expressed their admiration for Peralta, agreed with her views, and made comments suggesting that they were in love with her and would like to marry her.

A white supremacist Telegram channel posted another video of Medina Peralta’s speech on February 15, calling her a “Spanish Falangist militant” and quoting her now-deleted Twitter account “Dead by will: The most beautiful comrades, because you impose it on yourselves . and you die by will. You die under the sun or under the stars but your blood becomes fertile like a spring.[14]

An American neo-Nazi published on February 17 screenshots of a translated interview that Medina Peralta gave to the daily El Español. Commenting on the interview, the user called Medina Peralta “a shining example of what a young National Socialist should be” writing that she “speaks with refreshing passion, clarity and truth. This level of Breakthrough leadership is extremely rare among women, especially younger ones, but when you’re able to prove yourself against so many odds, it’s truly admirable and heartbreaking.”[15]

After Medina Peralta was criticized by the media, civil society groups and the government for her comments, prominent neo-Nazis came to her defense. A Canadian neo-Nazi who claims to have Spanish heritage has posted an article critical of Medina Peralta on his Telegram channel. He calls the article “disgusting rhetoric” by “shitty experts” and that the effort to accuse him of hate speech is an attempt to “totalitarianly control all speech in a country, with brute force used against dissenting opinions.[16]

A British neo-Nazi group has also published about attacks on Isabel by the state and the media, writing on February 18 that “a comrade in Spain…asked if we could pay tribute to her courage, strength and his intelligence”.[17]

In the comment sections, users declared their support for Medina Peralta and one user called her “an exceptional young woman. A vision of the new European youth finding her voice.”[18]