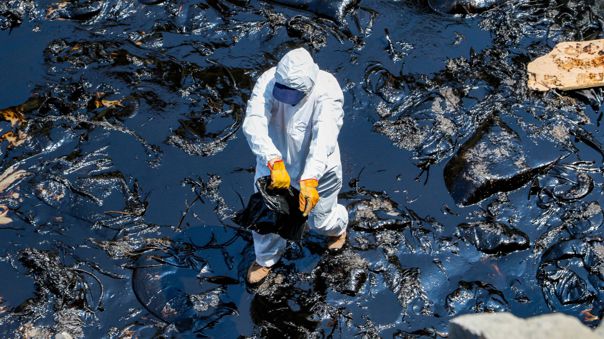 OPEN LETTER ON THE ECOLOGICAL DISASTER

Subject: We, the trade unions of Petróleos del Perú Petroperú, in view of the serious and irreparable damage caused by the Spanish transnational REPSOL, kindly ask you to REVIEW THE CONTRACT WITH THIS COMPANY for the defense of national interest and defense.

We hereby send you our greetings and would like to emphasize the following:

1) That, AS UNION WORKERS OF PETRÓLEOS DEL PERÚ PETROPERÚ SA, we have historically contributed to guaranteeing the energy security of our homeland, prioritizing the national interest, sovereignty, defense and dignity .

2) That in 1996 the corrupt government of dictator Alberto Fujimori privatized 60% of the shares of the La Pampilla refinery for the benefit of the Relapasa consortium, made up of the Spanish transnational REPSOL, which held 55% of the shares and which had YPF, Mobil and three Peruvian companies as minority partners. The value of the sale was US$180 million, including in the transaction US$38 million in foreign debt securities, while the real value of Peru’s largest refinery was US$460 million, taking into account the land price valued at $104 million.

This harmful action for Peru was the result of corrupt state policy that stoned public and strategic companies behind the nation’s back.

3) That, 26 years after this privatization, which harmed Peru, the La Pampilla SAA or RELAPASA Refinery, a subsidiary of REPSOL PERU BV and PART OF THE SPANISH REPSOL GROUP, is the most important refinery of the seven that exist in the country , with a primary refining capacity of 117 (mbd) thousand barrels of oil per day, considering that 53.7% of production corresponds to diesel and 24.3% to gasoline. Similarly, its subsidiary Repsol Comercial SAC (Recosac) is in charge of marketing the fuels produced by the refinery, using part of its 590 service stations (own and under flag).

4) That the La Pampilla refinery managed by REPSOL invoiced in 2019 a total of 3,064.3 million US dollars and that in 2020 its total revenue was 1,419 dollars. 5 million US dollars being a consequence of the impact of the Covid-19 pandemic in the world, these figures reveal that the hydrocarbon activity of the Spanish transnational in Peru has been excessively profitable compared to the 180 million US dollars Americans who it cost by the privatization carried out by the corrupt dictator Alberto Fujimori.

5) That, the TRADE UNIONS signatories of this letter point out that it is INADMISSIBLE that after the alert of the oil spill on the coasts of Callao on Tuesday January 18, 2022, which affected 18 thousand square meters of the beaches of this coast and spread environmental damage, including at Chancayo Port, the oil spill is believed to have affected Chancayo Port, Spain’s transnational REPSOL tried to deceive the nation by saying it was just a 7 gallon spill of crude oil when there were about 6,000 barrels of oil that polluted the Grau Sea.

6) That the damage caused to the environment and to the people who inhabit this coastal area is irreparable and irreversible, and IT IS REPUDIABLE THAT THE COMPANY REPSOL IN ITS OFFICIAL COMMUNICATION ATTEMPTED TO AVOID ITS LIABILITY by stating that this spill was caused by a phenomenon, caused by the volcanic eruption in Tonga. WITH THIS ATTITUDE, REPSOL SHOWS CONTEMPT FOR THE LIVES OF OUR POPULATION AND FOR THE PERUVIAN TERRITORY WHICH HOLDS WITHIN ITS WIGS THE RICHES OF THE SEA OF OUR GLORIOUS HERO MIGUEL GRAU SEMINARIO.

7) That in the 1990s the dictator Alberto Fujimori began the process of privatization of strategic, mining and hydrocarbon companies. Since then, corrupt economic, political and media groups have allied to undermine and devalue the Peruvian state-owned company Petroperu, causing it to lose its competitiveness in the market, also highlighting that it was and is a burden on the Peruvian state. In this sense, today these same “operators” remain silent and try to clear the responsibility of the Spanish transnational REPSOL in the face of this serious, irreparable and irreversible environmental damage, which threatens our territory, which includes the MAR DE GRAU, as well as defense and national sovereignty of our country.

In this regard, Article 54 of the Political Constitution of Peru expressly states:
“Territory, Sovereignty and Jurisdiction.

The territory of the State is inalienable and inviolable. It includes the ground, the subsoil, the maritime domain and the airspace which covers them.

The maritime domain of the State includes the sea adjacent to its coasts, as well as its bed and subsoil, up to a distance of two hundred nautical miles measured from the baselines established by law.
In its maritime domain, the State exercises its sovereignty and jurisdiction”.

A constitutional mandate that REPSOL intends to ignore by denying its responsibility in the visible environmental crime committed on the coast of Callao and which extends to the port of Chancay in the province of Huaral north of Lima.

In this sense, the UNION ORGANIZATIONS signatories to this letter reiterate that we have always defended the great interests of the homeland, as they are written in our history, as expressed in the recovery of La Brea and Pariñas by the revolutionary government of General Juan Velazco Alvarado. , which determined by Decree-Law No. 17821 of September 19, 1979, that October 9 be declared “National Day of Dignity” because national dignity was centered on the recovery of oil for the interest of the nation. A patriotic foundation that we, the oil workers of Peru, keep alive in our hearts.

8) That, for the above reasons and as workers organized in trade union institutions, WE REQUEST THAT THE PRESIDENT OF THE COUNCIL OF MINISTERS, MIRTHA VÁSQUEZ CHUQUILÍN, REVISE THE CONTRACT WITH THE SPANISH TRANSNATIONAL REPSOL, for the defense of the sacred interests of the homeland .

IT’S TIME TO RECOVER NATIONAL DIGNITY
IN “THE YEAR OF STRENGTHENING NATIONAL SOVEREIGNTY”!
OUR COMMITMENT IS TO THE BEST INTERESTS OF OUR EMPLOYEES!
WE ARE UNIONISTS AND WE FIGHT
FOR THE SACRED INTERESTS OF THE HOMELAND!

How are members of upper chambers chosen around the world? – Electoral Reform Society – ERS

Only Almodóvar could tell such stories with wit, warmth and color