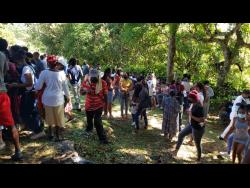 Patricia Green | Maroons and the struggle for land | On point

“… A treaty is an agreement between states. Another word for treaty is convention. To be binding, a treaty must be written, made between states, intended to be binding and governed by international law…” explains David Batts in “The Law and the Constitution for Every Jamaican”. In Jamaica, there are two important treaties relating to land rights: the Treaty of Madrid of 1670 and the Treaty of the Maroons of 1739. I use these to advance the discussion “Changing Land Tenure on Crown Lands” in The Gleaner of September 25, when I wonder who the Maroons of Jamaica were and what exactly is their struggle for the land?

The history of Jamaica and its laws was written from the perspective of the English who captured the island in 1655. To understand the significance of these two treaties, history must go beyond 1655 and back to the Taino lands period. He would then anchor the first “Maroons” [Cimaroones] as displaced Tainos fighting Spain to recover their land, also later joined by displaced Spaniards fighting Britain to recover their property.

My research on the cultural landscape of Spanish Jamaica draws on the work of two senior scholars, the Hon. Sylvia Wynter-Carew OJ, in the 1980s, and the North American Irene Aloha Wright in the 1920s and 1930s. I followed in their footsteps in the Archivo de Indias in Seville, Spain. Jamaica was a Spanish colony for 161 years after the landing of Christopher Columbus in 1494. Wright reports that there were two colonies: Oristan and Seville. My analyzes show that the Spaniards encounter two Taino kingdoms, each with a ruling king called a cacique. Their Spanish names for these kingdoms were territorially what they called Melilla in the north, in which they named this capital Taino and adopted it as their own, calling it Seville (c. 1509). It is important to note that historical Spanish documents omit any reference to “New Seville”. Oristan was the Spanish name given to the other Taino kingdom in the south with a capital that the Spaniards called “La Villa” and used as their main town called Santiago de la Vega (c. 1509), now called Spanish Town. Thus, the Taino lands became lands of the Spanish Crown.

Wynter-Carew developed a system of neo-serfdom called Encomienda in which caciques provided labor and provisions to Spanish settlers. For example, the 1525 church project in Seville, Jamaica was being built by skilled Taino stonemasons and craftsmen led by cacique Juan de Medina. Although unfinished, its sculpture fragments testify to a cultural syncretism of great importance for understanding the history of art in the Americas. Moors [Moros] ethnic North Africans in Spanish Jamaica, as enslaved labor to the king, were responsible for the open beaches between the estates [realengo] under the protection of the king as Crown lands for cattle ranching which fueled exploration activities in Central and North America.

Frank Cundall and Joseph Luckert Pietersz in ‘Jamaica Under the Spaniards: Abstracted from the Archives of Seville’, share that in 1611 the Spanish population of Jamaica was approximately 1,510, 37% of whom were slaves; 35% Spanish men and women; 11% Spanish children; seven percent free “nigger”; five percent foreigners/newcomers; and five percent “Indians” from Jamaica [Tainos]. According to studies in the Hispanic Americas, “Spanish” freed people included Christian converts with Spanish names of all ethnicities, including indigenous and African peoples. So when Britain invaded and captured Jamaica from Spain in 1655, it encountered an integrated productive society, drove these inhabitants from their homes and lands and settled in their buildings, claiming them as British property.

Some Spaniards fled the island, however, many remained, leading guerrilla warfare. Infamous, as recorded by the Jamaica National Heritage Trust, was Juan de Bolas whose Spanish name was Juan Lubolo, considered the first maroon chieftain. Lubolo aided Jamaica’s last Spanish governor, Don Christoval Arnaldo Ysassi, in the guerrilla wars against Britain in Jamaica from 1655 until Ysassi’s departure in 1660. The following year, the British monarch, the King Charles II, by proclamation of 1661, placed all land on the island of Jamaica under the ownership of the British Crown and granted land grants to freed Britons. King Charles II proclaimed that they “…shall hold and enjoy the said lands to be allotted, and all houses, edifices, buildings and enclosures, to be built or made upon, to them and their heirs forever.. .”.

The Treaty of Madrid of 1670 was concluded between Charles II, King of Great Britain and Carlos II, King of Spain “…for the settlement of disputes, the limitation of depredations, and the establishment of peace in America, between the crowns of Great Britain and Spain…”. Eighty-four years later, the Maroons, as intergenerational Spanish nationals, entered into the Maroon Treaty of 1739 to compensate for the loss of their lands to Britain and were granted lands by the British Crown. Respectfully, I submit that the Maroon Treaty responded to the separation of these original maroons and their descendants inside Jamaica as Spaniards alongside those of Great Britain. I manipulated documents from the Jamaican government archives showing maroon returns listing their own enslaved people.

The maroon lands should therefore be considered Taino and Spanish family lands, and Batts posits that here in Jamaica family lands are often referred to “…but they are not yet recognized in our law…inherited from generation to generation within the family and of general convention does not sell…” The maroon treaty reads under the third clause “…they shall enjoy and possess, and their posterity forever”.

Understand that if an enslaved African fled British plantation slavery to join the Maroon community, then that enslaved African would automatically have been undesirable. Also, if he remained, the possibility of being entitled to a generational inheritance may have become an issue. This therefore explains why the Maroons arrest and bring runaways back into plantation slavery. Significantly, this points to the event of 1796, when between 550 and 600 “maroon” men, women, and children were exiled from Trelawny, Jamaica, and shipped to Nova Scotia, Canada, en route to Africa. Batts states that a “trespasser” is a “squatter”, stating that “…the Trespass Act was passed in 1851 as part of the effort to ensure that recently enfranchised people would continue to work on sugar cane plantations. sugar. Trespassing into the land is not a crime in England but a tort (tort)…”. Similarly, the maroon state would have viewed runaways as intruders or squatters in their community.

What if successive governments set in motion the use of Crown lands to remedy land injustice, as was done through the Maroon Treaty of 1739? Perhaps this would help prevent crime and reduce the generational landlessness of Jamaicans who continually demonstrate their ability to afford affordable housing.

Patricia Green, PhD, architect and registered ecologist, is an independent researcher and advocate for the built and natural environment. Send your comments to [email protected]