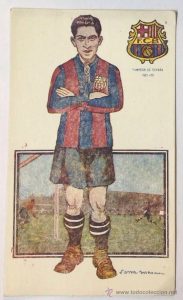 If the average football fan were asked to name Barcelona’s biggest stars, you would expect them to say Lionel Messi, Luis Suarez, Xavi, Andres Iniesta or Ronaldinho and others. An older fan can cite names such as Johan Cruyff, Pep Guardiola, Ronald Koeman or Romario.

However, one man who may not be as well known, but who definitely deserves a place among those already mentioned, is Paulino Alcantara. Hailing from the Philippines, Alcantara was not only a truly legendary FC Barcelona player, but he also broke many barriers in Filipino and Spanish society, making him a hero to many. Beyond his football career, Alcantara’s story was also particularly fascinating, as he found himself embroiled in Spanish political history of the 1930s.

On October 7, 1896, Paulino Alcantara Riestra came into the world, the son of Eduardo Alcantara, an officer in the Spanish army, and Victoriana Camilan Riestra, a Filipino mother of indigenous Ilongga descent. Alcantara left his hometown of Concepcion in the Philippine province of Iloilo for Barcelona, ​​Spain in 1899, just as Joan Gamper officially established the soon-to-be famous football team, Futbol Club Barcelona. After being selected by the founder himself in 1912, Alcantara joined the Barcelona academy aged just 15, before making his senior debut the same year.

When Alcantara took the pitch against Catala SC in the Catalan league (before La Liga was established), he became the first-ever Asian or Pacific Islander to play football for a European team as well as the youngest player to play for FC Barcelona. , a record that still stands. The records didn’t stop there, however, as Barcelona would go on to beat Catala 9-0. The first, second and third goals were all scored by Alcantara himself, becoming Barcelona’s youngest goalscorer, another record which still stands.

Over the next few seasons, Alcantara would establish himself as one of the best players in the team and one of Barcelona’s very first superstars. He would also win several major titles, such as the 1913 and 1916 league titles as well as the 1913 Copa del Rey. Alcantara played as a striker and was known for his incredible goalscoring skills, scoring goals for fun it seemed.

However, in 1916, after his family decided to return to the Philippines, Alcantara was forced to end his stay in Barcelona prematurely. In his native nation, Alcantara went to college, studying to become a doctor. Despite his studies, he continued his football career, playing for the Bohemian Sporting Club in the Philippine league.

Possessing a talent like no other, Alcantara propelled his new club to two league victories in 1917 and 1918. The Filipino hero then caught the attention of his national team, and soon he was representing the Philippine national team at the Far Eastern Games. . It was in this tournament that Alcantara captured the hearts of all Filipinos as he led his team to a resounding 15-2 victory over Japan, the Philippines’ historic sporting rivals, thus getting on the record of game. This humiliating demolition of the Japanese is still currently the biggest victory of the national team of the Philippines.

Despite his success in Spain’s former East Indies, FC Barcelona were desperate for Alcantara in Catalonia and they begged him to return as they had no trophies since he left. Alcantara wanted to return to the Catalan capital but at a time when football was not the major cultural and global sport it is today, his parents preferred that he focus on medical school. However, when Alcantara suddenly caught malaria, he insisted he would refuse treatment unless he could return to Spain, and he eventually got his wish.

Upon returning to Spain and cured of malaria, Alcantara arrived as a much more mature player mentally, but also much stronger physically. As a result, the goals rolled more than ever and Barcelona found their way back to winning ways. Alcantara’s second stint in a Blaugrana shirt is where he will reach the pinnacle of his career, cementing his place among Barcelona’s top performers forever. On the international stage, Alcantara would also play for Spain and Catalonia, although unfortunately he could never represent either team in a major tournament as he played in an era before the formation of the World Cup or Euro.

It was on international duty, however, that a truly personifying moment in Paulino Alcantara’s career would occur. In a 1922 international friendly, Alcantara lined up against France while playing for Spain. La Furia Roja eventually won 4-0 against the French, with the Filipino talisman earning a brace. However, one of his goals was particularly historic as he hit the ball with such venom and force that it tore the net. Following this momentous feat, Alcantara became known as “Trencaxarxes” in Catalan, or “El Romperedes” in Spanish, both meaning “the Net Burster”. A similar incident happened while playing for Barcelona against Real Sociedad, where it was reported that a police officer accidentally stepped on the pitch. Unfortunately for the policeman, he found himself caught in the crosshairs between a powerful shot from Paulino Alcantara and the front of the Real Sociedad goal. The shot hit with such momentum that it sent both the ball and the poor cop into the goal.

Opting to finally pursue a career as a doctor, Alcantara would eventually retire from football in 1927, aged just 31. Alcantara completed his second stint at Barcelona winning eight of a possible nine league titles, as well as four Copa del Rey titles in which he scored in the final three. Individually, he would also end his Barcelona career with an absolutely incredible tally of 395 goals in 399 games, making him Barcelona’s all-time top scorer until Lionel Messi overtook him in 2014. Unfortunately, the majority of Alcantara goals were not recognized as being scored on official. matches, but even if you only consider his official goals, he still sits seventh in Barcelona’s all-time goalscoring chart with 143 goals, above recent Barcelona legends like Samuel Eto’o and Rivaldo.

As Alcantara embarked on a career in medicine, he briefly returned to football on the managerial front, managing the Spanish and Catalan national teams in the 1950s, remaining unbeaten as manager of Spain. When considering the legacy of Alcantara in a modern context, it is still very impactful as it paved the way for many foreigners from the former Spanish colonies to make a name for themselves playing football in their home countries. , as well as Asian and Pacific Islander footballers playing for European clubs. in general.

Alcantara broke many barriers coming to Barcelona and certainly left a major influence on the players to come. As a man of Asian descent, indigenous to the Pacific Islands and of mixed race, he probably had to overcome many adversities and discriminations in white Spanish and Catalan society. But with his dazzling skills, ambitious desire on the pitch, and sympathy with his honorable presence as a gentleman, he found himself fully accepted into society.

Alcantara was a pioneer in many ways. After laying the foundations, players like Alfredo Di Stefano from Argentina, Hugo Sanchez from Mexico, Ivan Zamorano from Chile, Diego Forlan from Uruguay, Lionel Messi from Argentina and Luis Suarez from Uruguay all made a name for themselves in the Spanish elite. Alcantara has also had a big effect on Asian and Pacific Islander footballers coming to Europe, with other players like Cha Bum-kun from South Korea, Ali Daei from Iran, Sami Al-Jaber from Saudi Arabia, Hidetoshi Nakata from Japan, Park Ji-sung from South Korea, Tim Cahill from Australia, Keisuke Honda from Japan and Son Heung-min from South Korea are all becoming big stars on the European stage.

Outside of football, Alcantara lived the years after retirement peacefully, pursuing his passion for medicine and working as a doctor. However, when the Spanish Civil War began, Alcantara would open a whole new chapter in its life, going in a completely different direction. As a member of the Falange Espanola political party, he was forced into exile in France and Andorra following General Francisco Franco’s failed 1936 national uprising.

Later that year, he would volunteer for the Nationalist forces and eventually be promoted to lieutenant in Franco’s army, his medical skills being put to good use. As the Spanish Civil War raged across the country, Alcantara was part of a tank regiment stationed in Aragon. The following year, he would then serve as a lieutenant in the famous Brigade Frecce Nere, otherwise known as the Black Arrows, which was a legionary force under the command of Benito Mussolini.

Along with Mussolini’s Black Arrows, Alcantara fought many battles all over Spain, ranging from Guadalajara to Aragon and even to his adopted homeland of Catalonia. Alcantara was even present during the crucial invasion of Barcelona in early 1939 which marked the end of the war and the Republican defeat.

After the fall of Barcelona, ​​Alcantara became a hero again, but instead of being with football fans, it was with Spanish nationalists that he became famous for his role as a field doctor and a prominent lieutenant. When the war finally ended and General Franco’s government prevailed over Spain, Alcantara returned to his medical practice, opening his own clinic. His military service will not be forgotten as he remains a lieutenant in the Black Arrows over the following years and he even holds several political positions later in Franco’s Party, Falange Espanola Tradicionalista y de las Juntas de Ofensiva Nacional Sindicalista, or FET y de las JONS.

Despite his role in a controversial period in Spanish history and his controversial life after football, Paulino Alcantara has remained a beloved figure at Barcelona. As mentioned earlier, he will briefly embark on a career in management, but he will also take up the role of technical director at Barcelona. In 1964 however, Alcantara’s life would be cut short at the relatively young age of 67 after he fell ill with the rare disease aplastic anemia.

After his passing, the football world and the people of Barcelona and the Philippines have never forgotten the legacy of the Filipino doctor. A statue of him stands in Pasig City, Manila, and the top club tournament in Philippine football is called the Copa Paulino Alcantara. In 2007, FIFA officially recognized Alcantara as the greatest Asian footballer of all time, and his legacy reminds a young man who broke many barriers in European football, while becoming one of the greatest players in sports history.

This is American fascism | open democracy

5 tips to break the cycle of payday loans