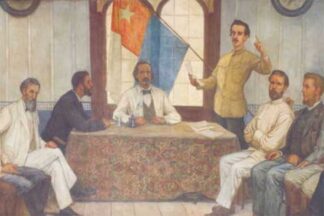 According to historians, since the beginning of the war against Spanish colonialism, and as a result of the disorganization in the uprising of the conspiratorial forces, the leadership of the struggle was divided.

Due to its strategic position between the camps of the insurrection, the city of Guaimaro was chosen for an assembly, held between April 10 and 12, 1869, to join forces against a common enemy.

Delegates from the East, the Center (Camagüey) and the Revolutionary Council of Las Villas were present, giving life to the first legal status in the republican history of Cuba to organize the country into an independent political state.

The Constitution was structured in 29 articles, in which it clarified the segmentation of the country into four states with the power to send equal representatives to the House.

The text establishes the obligation to elect and be elected, recognizes the condition of free man to all Cuban inhabitants, as well as the duty and the right to be soldiers of the Liberation Army, as well as to other civil guarantees.

More than two decades after this event and supported by the first patriotic associations, the Cuban national hero José Marti created on April 10, 1892 the Cuban Revolutionary Party (PRC) with the main objective of the absolute independence of Cuba.

According to historical documents, among the decisive moments of this organization was the election of its only leaders: Delegate (Marti) and Treasurer (Benjamin Guerra).

The PRC united the patriots who again fought against Spanish colonialism in Cuba and collected resources for the war.

In tribute to April 10 and what it represents in Cuban history, on this same date, but in 2019, the Constitution was proclaimed.

The current Constitution of the Republic has ratified the socialist character of the nation and the leading role of the Communist Party (CCP), in addition to expanding individual rights and guarantees and strengthening People’s Power throughout the country.

Peter Singer: Consciousness is not exclusive to humans, or even primates | Culture