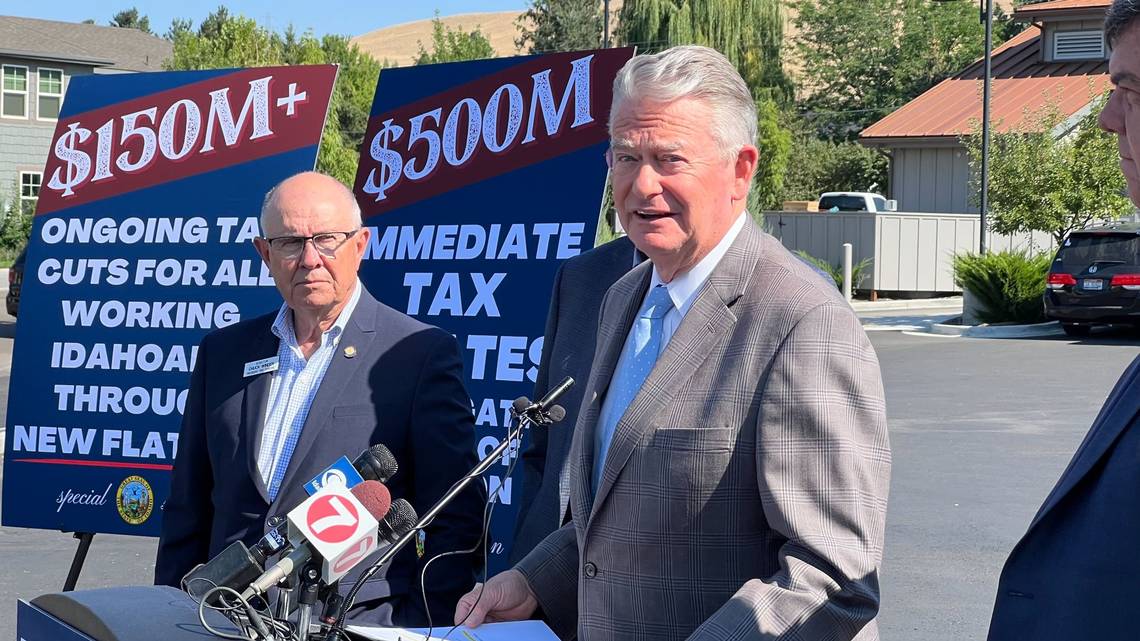 Several of Idaho’s top politicians refuse to debate opponents. Here’s who’s in, out

BOISE (Idaho Statesman) — Incumbent Republican Gov. Brad Little and the two U.S. House members from Idaho declined to participate in traditional Idaho debates, while four other televised discussions for state offices State scheduled for next month will be held before the general elections in November.

Little’s choice follows a similar decision in April, when he declined to publicly engage with GOP opponents in a televised contest while making his case to Republican voters in the state ahead of the primary election in may. With nearly 53% of the vote, Little, 68, beat seven other candidates, including his closest challenger, Lt. Governor Janice McGeachin, by more than 20 percentage points.

Seeking his third term in the state’s 1st congressional district, Republican U.S. Representative Russ Fulcher, 60, will not appear for a debate against his Democratic rival Kaylee Peterson. Fulcher, who represents western and northern Idaho, did not face a Republican challenge in the primary.

“Of course, we’re disappointed,” Melissa Davlin, moderator and lead producer of Idaho Debates, which broadcasts on Idaho Public Television, told the Idaho Statesman in a phone interview. “This may be the only chance the vast majority of Idahoans have to see the two candidates side-by-side and how they would address issues very important to the state. It’s part of the duty of television public, to spread education.

“The hardest and most expensive part of any campaign – in place or not – is reaching people with your message, and that’s all part of the debates,” Bundy, 47, told the Statesman by phone. “It almost seems like Governor Little not accepting the challenge, if you will, to debate is that he’s trying to keep the people of Idaho in the dark. To me, that’s a disservice to the people of Idaho.

Little’s campaign manager Hayden Rogers said attending the gubernatorial debate was unnecessary for voters, citing the incumbent’s record, which he said includes cutting taxes for families and businesses, and redirecting hundreds of millions of dollars of tax surpluses to education and infrastructure.

“We are confident that the people of Idaho know what Governor Little stands for based on his clear track record of delivering results for the people of our great state,” Rogers told The Statesman in an emailed statement. . “Just two weeks ago, Governor Little and the Idaho Legislature championed unprecedented tax relief and support for schools while cutting taxes. Under his leadership, Idaho cut 90% of red tape and became the least regulated state in the country.

Debates will continue in other statewide races of significant public interest, including for attorney general, lieutenant governor, superintendent of public instruction and the U.S. Senate. But the choice of several state incumbents to dodge political debate reflects a growing trend — in Idaho and across the country — of high-profile candidates refusing to get involved in the age-old process.

The growing tactic raises concerns about the state of American democracy for experts and historians in the fields of American government and political science.

“That’s the problem with running for office: it’s a democratic tradition,” David Adler, an Idaho Falls-based political analyst, previously told the Statesman. “Voters expect candidates to appear in front of the public and answer questions.”

THE HOLDING CRAPO ALONE TO DEBATE

Republican incumbent Senator Mike Crapo, 71, for four terms, is among those who have signed on to debate with his two challengers: Democrat David Roth, 41, of Idaho Falls, and independent Scott Oh Cleveland, 60 years, of Eagle. The 90-minute taped event will stream live online October 3 and air on Idaho Public TV October 4.

“I have accepted the debate on Idaho Public Television to share directly with the people of Idaho my strong record of fighting to protect Idaho from the excesses of the federal government and supporting pro-growth economic policies. “Crapo told the Statesman via email. “I welcome the opportunity to describe the work I have done and will continue to do on behalf of all Idahoans in Washington.”

In May, Crapo won 67% of the vote to defeat four GOP rivals in pursuit of a fifth term. In the Democratic primary, Roth won the party’s nomination with nearly 58% of the vote.

“So often voters only hear from their leaders in the form of boilerplate letters and repeated public statements,” Roth told the Statesman via email. “The debate is an opportunity to get past them and really get a sense of who the candidate is and what he stands for. I am extremely disappointed that the other Republican federal candidates as well as the Republican gubernatorial candidate have chose to deprive Idaho voters of this important part of the electoral process.

Crapo retains a considerable fundraising advantage over his challengers. Through June, the Republican has declared more than $5.6 million in cash to spend on his campaign, if he chooses, according to Federal Election Commission records.

“The Idaho public television debate is important so Idaho voters can hear each candidate first-hand,” Cleveland told the Statesman. “This format helps level the playing field in terms of money and name recognition.”

Meanwhile, in the other two federal races, Democratic challengers lambasted their Republican incumbent rivals in Congress for rejecting the opportunity to debate.

“If we let them off the hook, they will continue to put their own interests ahead of those of Idaho,” Norman and Peterson said in a joint statement. “We have to remind them who they work for. We must hold their feet to the fire.

Fulcher’s campaign did not respond to a Statesman request for comment.

“The people of Idaho know that Mike Simpson is a strong supporter of Idaho agriculture and used his congressional seniority to not only get the wolf off the list, but to keep the sage grouse off the list. be listed as an endangered species and reign supreme in the EPA,” Nelson told the Statesman via email. “He works hard to advance the development of nuclear energy and is a strong supporter of returning to energy independence.

RIVALS TO COMPETE IN OTHER RACES

In another of Idaho’s most-watched races, Republican Raúl Labrador, 54, a former Idaho congressman, takes on the state’s attorney general with Democrat Tom Arkoosh, a longtime lawyer and lobbyist. . With 51.6% of the vote, Labrador beat five-time incumbent Lawrence Wasden by almost 14 percentage points, while Arkoosh entered the race after a former Democratic candidate withdrew in July. Labrador and Arkoosh will debate for an hour on the evening of October 3.

On October 24, two weeks before the election, Republican Debbie Critchfield will debate Democrat Terry Gilbert in the race for Superintendent of Public Instruction. Critchfield secured almost 40% of the vote in the May primary, beating two-time incumbent Sherri Ybarra and challenger Branden Durst. Gilbert ran unopposed in the Democratic primary.

“Of course, Idaho is a tough state for Democrats, but not all races are the same for Republicans,” Davlin said. “And those are the types of debates, like Superintendent of Public Instruction … where it really matters how the candidates approach the issues that affect Idahoans every day.”

KTVB Channel 7 is set to host a second debate between the two superintendent candidates on October 25, according to Democratic campaign volunteer Jean McNeil.

Finally, on October 28, IPTV will host Republican Scott Bedke, longtime Speaker of the Idaho House, and Democrat Terri Pickens Manweiler for a 60-minute debate in the race for Lieutenant Governor. Pickens Manweiler ran unopposed in the Democratic primary, while Bedke, 64, won the Republican nomination with nearly 52% of the vote.

In the race for state treasurer, Democratic nominee Deborah Silver declined to debate Republican Julie Ellsworth, according to the Idaho Debates Committee.

For the secretary of state, Democratic nominee Shawn Keenan did not respond to requests to schedule a debate with Ada County Clerk and Republican nominee Phil McGrane, the Idaho Debates Committee reported. And neither Democratic nominee Dianna David nor Constitutional nominee Miste Gardner responded to requests to debate Republican nominee Brandon Woolf in the race for state comptroller.

The four scheduled Idaho Public Television debates will be rebroadcast with Spanish closed captions and will also be available online. Viewers can check the IPTV schedule at idahoptv.org.