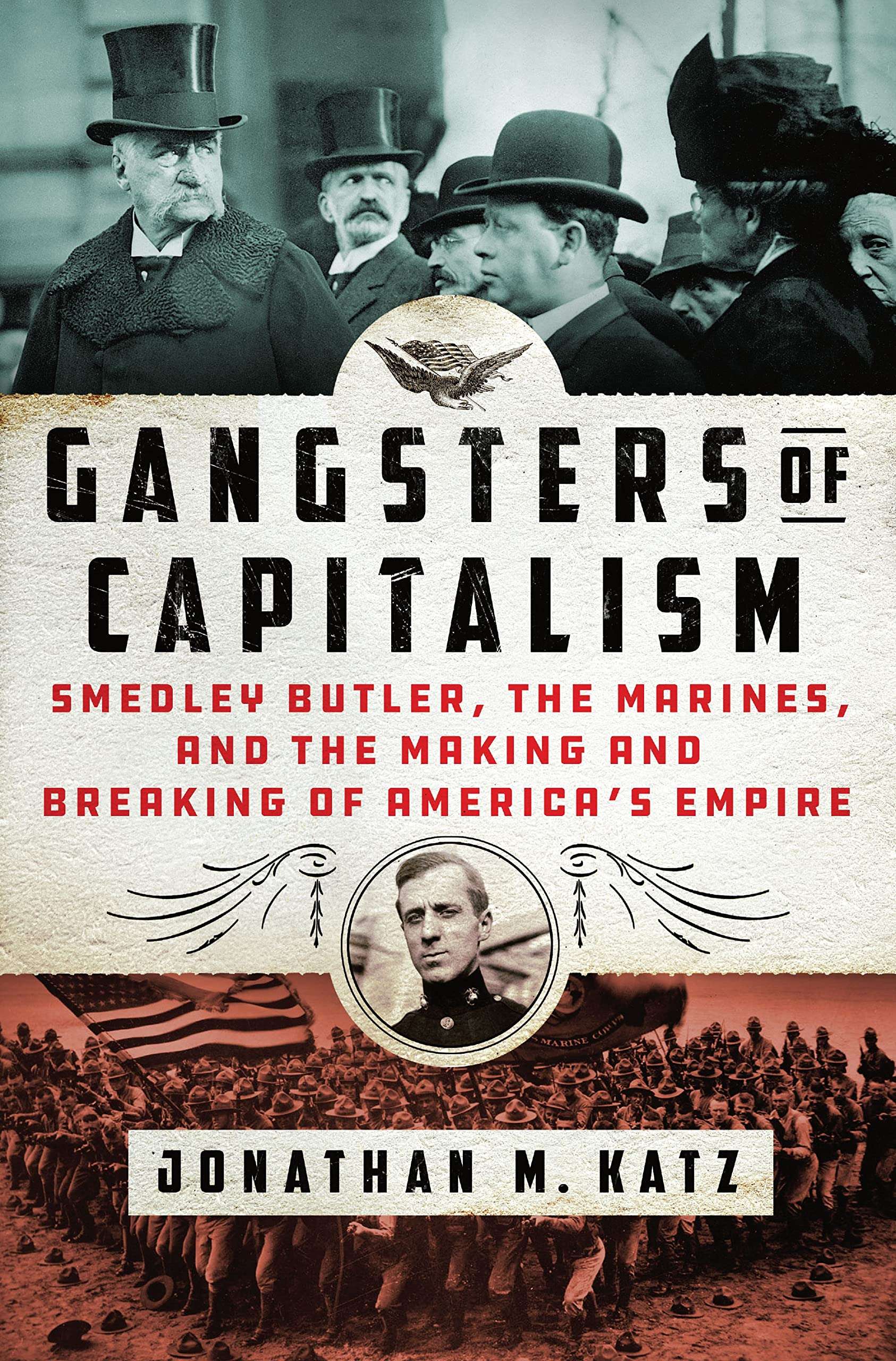 Gangsters of Capitalism: Smedley Butler, the Marines, and the Making and Breaking of the American Empireby Jonathan M. Katz, Macmillan, 432 pages, $29.99

The legend of Smedley Butler has supported America’s anti-war movement for nearly a century.

A Navy commander who committed untold atrocities in Washington’s “little wars” between the Spanish-American War and World War II, Butler turned against the empire he had fought, killed and enslaved countless people during the last decade of his life. During the Depression of the 1930s, he renounced everything he had done, famously declaring that “war is racketeering” for the economic interests of the ruling elite.

Butler led combat units in the military occupations of the Philippines, China, Mexico, Nicaragua, Honduras, Panama, Haiti, and the Dominican Republic. The politicians who sent him to these places, notably Woodrow Wilson, claimed that the missions were to preserve stability among the restless natives and to make the world more democratic, freer and more like America. But after retiring from the service, Butler saw things differently. “I spent most of my time being a high-class muscle man for big business,” he said towards the end of his life, “for Wall Street and for bankers. In short, I was a racket for capitalism.”

A Quaker from a respectable family on the main line in Philadelphia, Butler “clingred to the principles of equality and fairness throughout his life, even as he fought to install and defend regimes despotic all over the world,” Katz writes. But for many there were two very different Smedley Butlers.

The first butler ordered the murder of thousands of natives, enslaved legions of civilians to build American-controlled infrastructure projects in conquered lands, and helped install military dictatorships across Latin America. When Butler and a battalion of Marines arrived in Honduras in 1903 to protect an American fruit company from rebels who wanted to seize his property, he wrote to his family that he was “ready to land and shoot everyone and on anything that would break the peace”. They were headed for a part of the world “where we might find American interests that must be protected”. to the expansion of the American empire.”I can’t wait for a nigger to throw a stone,” Butler told his wife.Meanwhile, a newspaper headline called Butler the “Ideal American Soldier” and Theodore Roosevelt has been described as “one of Captain Butler’s most ardent admirers”.

After his military career, the city of Philadelphia hired Butler as a police commissioner to enforce Prohibition. Butler quickly militarized the police force and launched a campaign of mass incarceration. Hundreds of Philadelphians were arrested daily during Butler’s reign.

The second butler—the ancient navy and ancient police commissioner – stood with the bonus army of World War I veterans who marched on Washington in 1932 asking for financial aid at the onset of the Depression. He gave speeches across the country identifying bankers and capitalists as the enemies of peace and freedom. And in 1934 he claimed he had been recruited to lead a fascist coup against the Roosevelt administration.

Katz connects the Last Butler to all that is good in America and the First Murderous Butler to Donald Trump and “America’s Imperial History”. The movement Trump has built, which Katz says “always dreams of reinstalling him by force,” is “a product of the greed, bigotry, and denial that have been woven into the fabric of global US supremacy. United from the start.”

During the 1910 invasion of Nicaragua, Butler indicated some of the ambivalence that Katz identifies in his thinking. On the one hand, he called the Nicaraguans “Spigs”, declaring them “the most useless and useless batch of vermin I have ever struck, even worse than our ‘little brown brothers’ the Filipinos”. At least those “motherfuckers will fight and those dogs won’t,” he claimed. But he also began to suspect that his orders came more from corporate boards than from Democratic legislatures: “The whole revolution is inspired and funded by Americans who have fierce investments here and want to make them good by putting in put in place a government that will declare a monopoly in their favour.The whole thing is rotten to the core…The whole game of these degenerate Americans here is to force the United States to intervene and, in doing so, make their investments profitable.

It was the Butler of 1910 speaking, the one Katz calls the proto-fascist ancestor of Trump and the Make America Great Again movement. However, he was already beginning to wonder about his role. Then again, Trump was more likely than previous presidents to question, at least rhetorically, the imperial system of regime change and nation-building that Smedley Butler helped build.

Katz misses an important part of Butler’s story: he was sent abroad on the American progressive movement’s mission to raise what he saw as the savages of the tropics.

In Haiti, Butler developed a special friendship with Franklin D. Roosevelt, then Assistant Secretary of the Navy in Woodrow Wilson’s administration. In the winter of 1917, Roosevelt’s interest turned to Haiti, where an essentially progressive project was underway, made possible by Butler’s Marines. Wilson had ordered troops to Haiti in 1915 to repel revolutionary forces hostile to American business interests and to prevent German incursions on the island. The United States established itself as the country’s sovereign authority with a permanent deployment of Marines and used the occupation as an opportunity to make Haiti an example of progressive uprising. As in the southern states during Reconstruction and in the Philippines after the Spanish-American War, roads and bridges were built, hospitals using Western medical techniques were established, and schools were started to teach not only skills but also Protestant virtues.

Roosevelt was eager to participate in the great reformation. He received permission and funding from the navy for a survey trip to what he called “the darkest Africa of the West Indies”. For two weeks, Roosevelt and Butler toured Navy outposts and met with American military governors and collaborationist Haitian officials. Young FDR praised Butler, the island’s police force administrator, who oversaw the killing of hundreds of rebels and the forced labor of 6,000 civilians forced to build public works projects.

When Roosevelt returned to Washington, he recommended the Medal of Honor for Butler, and five years later he wrote a vigorous defense of the occupation. Before the intervention of the United States, he wrote, “the inhabitants of Haiti, taken en masse, were little more than primitive savages” and the country had not been a “Republic in our term, than were the principalities of Haiti”. India, before the advent of the British.” Roosevelt was so enamored with Haiti that he often thought of buying portions of it and moving his family there during the winters.

Butler was an enthusiastic supporter of Roosevelt early in his presidency, when FDR instituted the closest thing to a fascist political economy the United States had ever seen. The National Industrial Recovery Act (NIRA), passed in June 1933, became the defining legislation of the so-called first New Deal. In a repudiation of free and competitive markets, the NIRA created corporate cartels in all major industries that would decide how much products would cost, how much workers would earn, and how much companies would produce. These cartels were called “code authorities”. In Italy, these institutions were called “corporate”. In Germany, they were known as “industrial cartels”. But in all three nations they held similar powers, and in all three nations they could only be overthrown by the head of state.

Trumpism certainly has authoritarian elements too, and it has at times lambasted America’s adversaries with irrational fury. But she tends to shrink from this desire to remake the world. JD Vance and other MAGA candidates have been lambasted by progressive media for saying “I don’t care what happens to Ukraine one way or another.”

When Butler was an imperialist, he was an imperialist in the progressive mould, like Wilson and Roosevelt. In fact, this country’s wars since its founding have almost always been initiated by true believers in this country as the best hope for mankind – people like Smedley Butler when he was burning villages to build democracy, and the even Smedley Butler who later believed that such brutality contradicted the “true” aims of this still imperial republic.