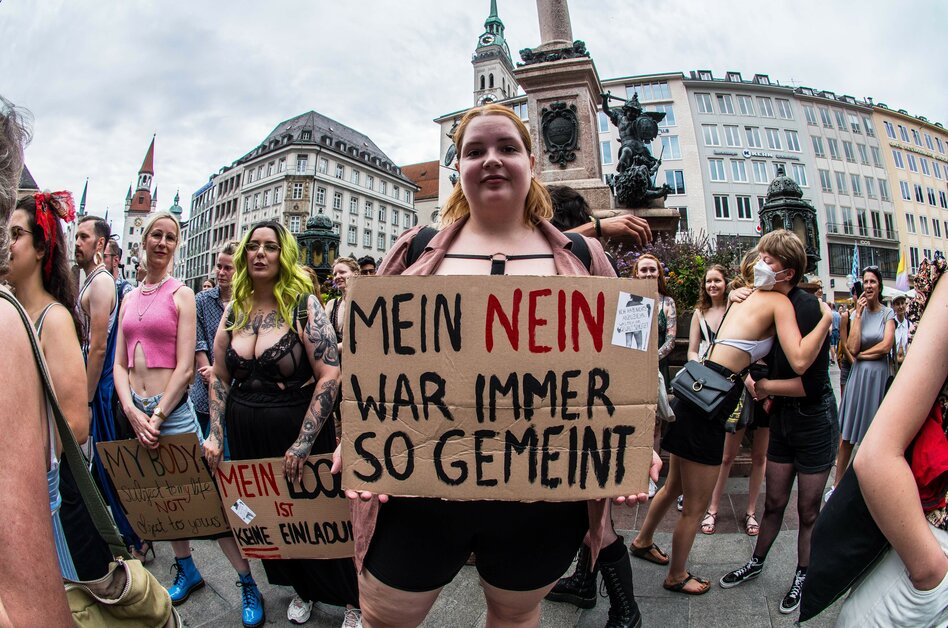 Women’s rights and violence against women have been receiving a lot of attention in Spain for years. With each new case of gender-based violence that is revealed, an outcry erupts in Spanish society, prompting thousands of people to demonstrate in the streets chanting the phrase “Ni Una Más” – “not one more”. “Violencia de Genero” – gender-based violence and gender justice receives a lot of space and airtime in the media and on television in Spain. It’s a topic on the evening news as well as Netflix’s Spanish hit ‘Alba’.

Violence against women is a sad daily reality in Germany as well. But unlike Spain, the subject receives virtually no social attention. Talk shows deal with gender, but violence against women is interpreted as a private tragedy and not perceived as a structural problem. However, the figures are alarming: one in three women in Germany has been the victim of violence at least once in her life. That hasn’t changed much in recent years. The Federal Criminal Police Office (BKA) registered 146,655 cases of domestic violence in 2020, which is 5% more than the previous year. Although men are also affected by domestic violence, the overwhelming majority of victims are women – more than 80%, according to the latest BKA report. Gender-based violence in virtual spaces is also becoming a growing problem, especially against women who are public figures. So-called feminicides, i.e. the killings of women because of their gender, amounted to 139 in 2020 according to the BKA’s latest “Situation Report on Partnership Violence”. Compared to the total population, this is significantly more than in so-called “macho country” Spain, where the “Office for Gender-Based Violence”, created in 2006, documents “only” 43 deaths in its last survey of 2021. Already Since 2003, the Spanish government publishes an annual evaluation of statistical data on feminicides by (ex)partners and recently expanded the definition of gender-based violence. Since January 2022, all forms of femicide have been identified. This includes misogynistic killings committed by family members, in the social environment or in connection with prostitution and exploitation.


Federal Minister of Justice Marco Buschmann (FDP) advocates naming gender-based violence as such so that it can be punished accordingly. “Those who attack women on the basis of male possessiveness are acting particularly blatantly against our value system,” he said while calling the extent of misogynistic violence in Germany “shocking”. Buschmann is therefore planning an amendment to the criminal code that would pay particular attention to gender-specific offenses and offenses targeting a person’s sexual orientation when determining sentencing. In addition, women’s rights in the digital space must be better protected, preventive measures and shelters for women must be expanded, and a national monitoring system for sexual and domestic violence must be introduced. It is particularly important to raise awareness and have uniform standards in police and judicial training. A woman should not depend on the help of a single policeman.

Spain has a head start. Popular mobilization and mass support led the Spanish Congress to adopt a series of historic measures to protect women. In addition to the law against gender-based violence, the fight against domestic violence is a “state mandate”. For Inés Arrimadas, leader of the Spanish liberal party “Ciudadanos”, the protection of women in a democracy must be “a task of the State and a consensus across all partisan differences”. A pact against gender-based violence has been reached between all parties represented in parliament and municipalities, which is not usually the case in Spain’s polarized partisan landscape. The pact provides, among other things, for the promotion of the protection of victims, research, awareness of the problem and the continuous training of professionals. In Spain, victims who do not press charges because they are afraid of the perpetrators, for example, also receive state support. The subject has been included in the school curriculum and listening centers have been created in town halls and health centres. With “VioGén”, Spain now has a national prevention program that is supposed to facilitate a coherent approach to violence against women through uniform action measures. This also includes cooperation with counseling centres, regular checks and clear consequences for perpetrators. A “violence against women” hotline, which offers anonymous and free advice, has existed in Spain for almost a decade longer than in Germany and is available in three times as many languages.


More recently, the “Law for the Guarantee of Sexual Freedom” was introduced, punishing sexual violence more severely and clearly defining what constitutes rape: namely, whenever a person does not say “yes”. The victims also do not have to show resistance because, in the event of shock, many people react with resignation. In short, no means no in Spain. And the measures are taking effect: more and more women dare to denounce their executioners. ‘Catcalling’, i.e. when people (mostly women) have to listen to lewd comments about their bodies or sexuality from strangers, is also prohibited.

The current Spanish government led by the socialist Pedro Sanchez considers itself to be avant-garde when it comes to women’s rights. But it has sometimes brought to light questionable measures, such as “menstrual leave”, where women can take days off if they suffer from particularly severe period pain. This measure could lead to discrimination on the part of employers who might be less inclined to hire women than men because of such provisions.

The strong commitment to women’s rights probably also has historical reasons. The memory of restrictions is too fresh and women do not want to be deprived of their hard-won equality in any way. For a long time, the position of women in Spain has lagged behind that of Europe. Until the late democratization of Spain, women were only entitled to the role of housewife and mother. Even among the Republicans, there were practically no women among the fighters of the Spanish Civil War. This attitude is best reflected in a popular saying during the Spanish Civil War that went “de la cintura para arriba” or progressive thinking is only present “above the belt”. The victory of the nationalists propelled Spain light years ahead in terms of women’s rights: under Franco, women had almost no rights. They were not allowed to do paid work, obtain a passport or open their own bank account without their husband’s permission. The Falange‘s “Sección Feminina”, the women’s organization within the Fascist movement, propagated a traditional image of the family and rejected equality between men and women. It was not until the end of the Franco dictatorship in 1975 that women’s rights and equality were gradually strengthened. With the first democratic constitution of 1978, women became equal to men before the law; in the 1980s, the possibility of divorcing one’s partner was introduced. However, until 1988, women were not allowed to be elected to parliament. In 1983, the Spanish Women’s Institute was founded on the recommendation of the United Nations. Since then, Spain has caught up and been a pioneer in terms of equality. In the Spanish Parliament, for example, 166 deputies are women, representing 47.4% of the seats. This means that the Spanish parliament takes the lead in the EU in terms of gender parity and ranks fifth in the world, according to UN Women. The gender pay gap is also larger in Germany, at 18%, than in Spain, at around 15%.


The example of Spain shows that modern legislation is an important element in the struggle for women’s rights. With regard to gender-based violence, what is needed above all is a change in the perception of society. Invisibility is particularly painful for victims of violence when society sees the problem as something intimate and familiar. The vast majority in Spain view violence against women as a societal failure and therefore follow an approach that tackling gender-based violence is about societal power dynamics, not personal relationships.

Women are still too often victims of violence – in Spain, Germany and all over the world. But we must not forget that women’s rights are human rights. No one has the right to determine the life of another and everyone should have the freedom to decide their own life, regardless of gender. In 2022, this should go without saying – and yet violence against women is much more widespread in Germany than one might think at first glance. It is therefore high time to accelerate the pace of the fight against gender-based violence.

On ‘Ramy’, he plays a sidekick. Now he’s on his own show