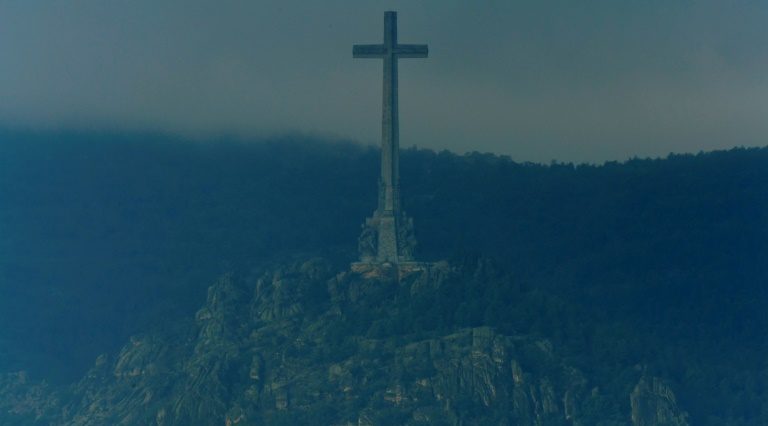 Jose Antonio Primo de Rivera, founder of the Spanish fascist Falange party who died at the start of the civil war, is buried in an imposing basilica near Madrid – Copyright AFP JALAA MAREY

Spain plans to move the remains of two far-right figures linked to its 1936-1939 civil war who are buried in grandiose sites, a minister announced on Thursday.

In remarks to Cadena Ser radio, Minister Felix Bolanos said new legislation passed this week would affect the grave of Jose Antonio Primo de Rivera, founder of Spain’s fascist Falange party, who died at the start of the civil war and was buried in an imposing state. mausoleum near Madrid.

The Basilica in the Valley of the Fallen is where the remains of dictator Francisco Franco were laid after his death in 1975 until they were moved to a more discreet grave by Spain’s leftist government in October 2019.

It would also affect the grave of Nationalist General Gonzalo Queipo de Llano, an ally of Franco who led a military campaign in the south during the Civil War and who is said to have given the go-ahead for the murder of Spanish poet Federico Garcia Lorca.

He is buried in the iconic Macarena Basilica in Seville.

Asked if the law would mean his remains would be moved, Bolanos said it would affect anyone involved in the coup that sparked the war and the dictatorship that followed.

“The new law says there can be no prominent place for people involved in the dictatorship or coup,” Bolanos said of landmark legislation passed by parliament this week to honor the victims of Francoism.

“This is not only the case of Queipo de Llano, but also of Jose Antonio Primo de Rivera, who is buried in front of the main altar (of the basilica)… which is an important place,” he said. he declares.

“Once the legislation comes into effect, the work will begin,” Bolanos said without giving further details.

“Obviously they should be buried with dignity where the parents decide, but they cannot be in an important place because it is a way of paying homage to the protagonists of the dictatorship.”

Honoring those who died or suffered violence or repression during the war and the decades of dictatorship that followed has been a top priority for Prime Minister Pedro Sanchez since coming to power in 2018.