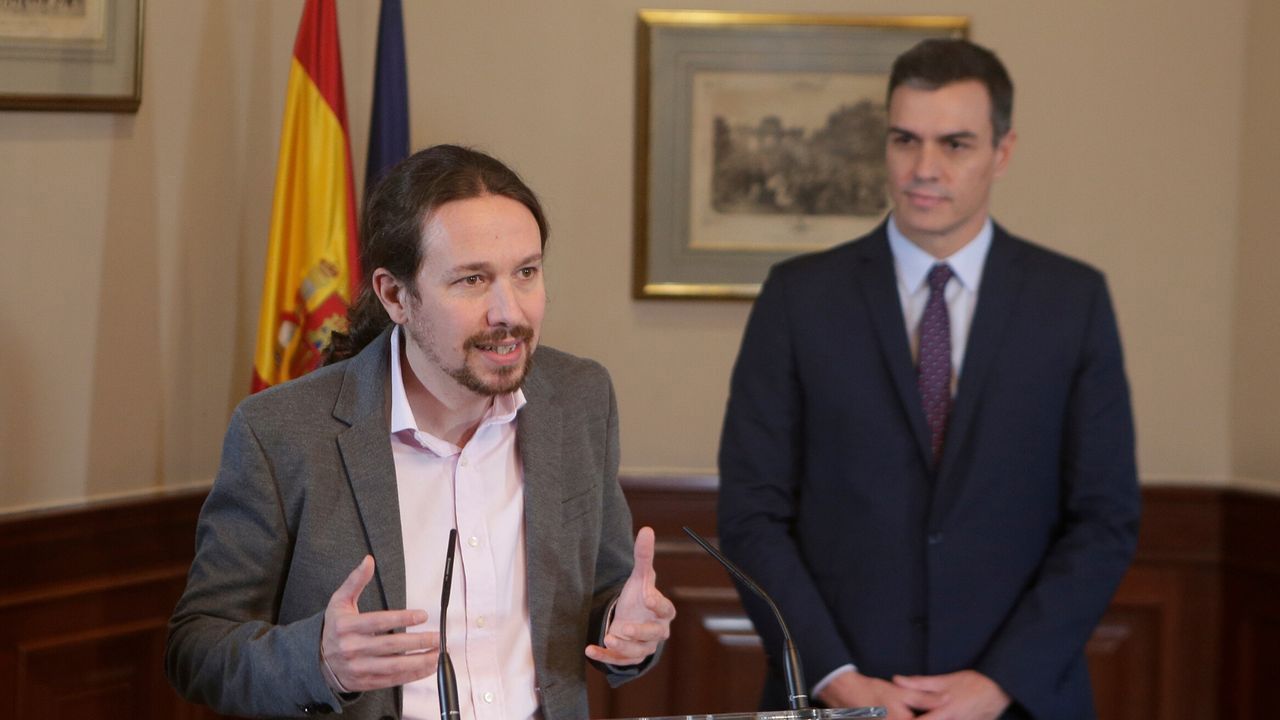 Ahead of next week’s NATO summit in Madrid, Spain’s ruling Podemos party, along with state-funded unions, the Podemos-Linked Workers’ Commissions (CCOO) and the General Union of Workers ( UGT) social democrat, are organizing an ‘anti-NATO Conference this weekend. A rally is to take place this Sunday. Various allied associations, such as the NATO Assembly Madrid No, the National Platform for peace-NO of NATO and the People’s Assembly against the war, must participate.

The politically hypocritical and sinister nature of these stunts is obvious. As de facto Podemos leader and Deputy Prime Minister Yolanda Díaz prepares to attend the NATO war-planning summit, other Podemos government officials stage “anti-NATO” protests. Many of these events will be held at the state-funded union halls of CCOO and UGT. These unions at the same time supported the war campaign and isolated and suppressed the truckers’ and steelworkers’ strikes against inflation, as massive funds were wasted on war expenditures.

The same Podemos party – which sends delegates to a conference supposedly against NATO and for peace – is actively sending warships, fighter jets and soldiers to Eastern Europe and bringing in tanks, ammunition and rocket launchers to Ukrainian NATO proxies for use against Russia. During the NATO summit, the PSOE-Podemos government plans to announce that it will double its military budget to 24 billion euros, the largest increase in military spending in the history of Spain and will call on the NATO to step up military interventions in resource-rich Africa.

Podemos’ aim in participating in an “anti-NATO” conference is to trap growing opposition to the war among workers and youth in the impasse of support for the pro-war Spanish government. In order to suppress opposition to its left, the Podemos government enlists the services of a whole layer of cynical pseudo-left operatives to promote it as a non-aggressive party and play down Podemos’ undeniable support for Spanish imperialism. and NATO.

An example of this cynical two-sided rhetoric is the article by the leader of the Morenoite Revolutionary Workers Current (CRT) Santiago Lupe on the La Izquierda Diario website titled “The Spanish Left and the Struggle Against Our Own Imperialism”. In it, Lupe concocts an intense debate supposedly taking place between a pro-war faction and a pro-peace faction of Podemos, when in fact it is an entirely pro-war party.

Lupe says the row between pro-Podemos journalist Antonio Maestre and former Podemos leader Pablo Iglesias “dramatizes the differences of Spain’s reformist left over what is the best foreign policy for the interests of Spanish imperialism.” Maestre, claims Lupe, sides with NATO’s policy of “taking advantage of the opportunity presented by the Russian invasion to impose a severe defeat on Russia”.

Lupe says Iglesias, on the other hand, takes a pro-EU stance based on greater autonomy from the US-led NATO alliance. Iglesias is in favor of an “EU diplomatic solution in agreement with Putin which, necessarily, would involve a certain level of territorial transfers and Ukrainian sovereignty”.

He claims that this position is supported by France, Germany and Italy: “The three main European powers are increasingly determined to reach some kind of agreement containing the consequences of a war which is already affecting Europe. economy of the EU and weakens it in its competition with the US.”

Lupe’s attempt to portray Iglesias’ pro-EU stance as less aggressive toward Russia than Washington proved wrong days after his article was published. Last Thursday, French President Emmanuel Macron, German Chancellor Olaf Scholz and Italian Prime Minister Mario Draghi traveled to kyiv to promise to supply more heavy weapons to Ukraine and discuss the prospect of joining the EU. In doing so, they consciously accepted the danger of a nuclear World War III.

This week, the Baltic state of Lithuania, a NATO and EU member state, imposed an effective blockade on the Russian enclave of Kaliningrad.

The CRT commits political fraud, promotes a non-existent debate between pro-imperialist forces and the fantasy that Podemos will turn into opposition to its own policies. Lupe tells his readers that Spain wants to use the NATO summit to “strengthen the southern flank, that is, North Africa, opening up the possibility of military interventions to control immigration.” Regarding these totally reactionary proposals, neither Podemos nor the PCE showed any opposition.

Who does the CRT think he’s kidding? Why should Podemos oppose its own policy? Podemos is not an accomplice of Spanish imperialism as the CRT repeatedly claims, but a pro-imperialist party fully committed to NATO’s proxy war against Russia in Ukraine.

In recent months, Spain has sent more than 800 troops to Eastern Europe, a detachment of Eurofighter fighter jets and three warships to the Eastern Mediterranean and the Black Sea. It is also implementing crippling economic sanctions against Russia, while sending hundreds of millions of euros worth of weapons to Ukrainian forces, including SHORAD Aspide short-range anti-aircraft air defense missiles and Leopard battle tanks. One of its main proxy forces on the ground, armed with Spanish weapons, is the neo-Nazi Azov Battalion.

Imperialist war abroad goes hand in hand with fierce class war at home. The PSOE-Podemos government sent tens of thousands of riot police to break April’s truckers’ strike and is spending tens of millions of euros to deploy 20,000 police officers armed with 6,000 Tasers to Madrid to suppress the demonstrations against the NATO summit.

Lupe’s promotion of Podemos exposes the reactionary role of the CRT itself. Unabashedly presenting himself as a Trotskyist, Lupe states that “Trotskyists maintained an independent position, away from any imperialist camp, at times like World War II.” This, he asserts, has nothing “to do with the shameful positions of groups which claim to be Trotskyist – such as Lutte Internationaliste, Courant Rouge or sectors of Mandelism such as Gilbert Achcar – which demand arms from NATO to Ukraine, in the same spirit”. way they called for ‘no-fly zones’ for Libya in 2011.”

The petty-bourgeois groups Internationalist Struggle and the Red Current both support the US-NATO war, claiming that Ukraine is waging a democratic struggle for self-determination against Russian “imperialism”. They went to kyiv to donate money to the “Ukrainian resistance”. In a recent statement, Red Struggle called on NATO to further escalate the proxy war against Russia, risking a Third World War, and called on “all countries that claim to defend the Ukrainians’ right to their sovereignty, to send more weapons to Ukraine without any conditions. ”

If Lupe finds these positions “shameful”, it is not because Lutte Internationaliste or Courant Rouge are embarrassed by their blatant support for imperialism. This is because their pro-war positions expose the fraud of Lupe’s own posture as an anti-war figure or even a Trotskyist. In reality, the CRT bases its views on calls for united action with all these pro-war and anti-Trotskyist groups.

During the regional elections in Madrid last year, Izquierda Diario published eight articles calling on these parties to build an “anti-capitalist front”. In Argentina, its sister party, the Socialist Workers’ Party (PTS), works with the sister parties of the Red Struggle and the Internationalist Struggle in the Workers’ Left Front – Unity in the Argentine parliament.

As for Gilbert Achcar, he is a paid adviser to the British army, a member of the New Anti-Capitalist Party (NPA), the French branch of the Spanish anti-capitalist tendency, and one of the main propagandists of NATO’s military escalation against Russia. Anticapitalistas regularly publishes Achcar’s articles on its online magazine Viento Sur.

If Lupe is “embarrassed” by Achcar’s hysterical pro-war position, again, it is because it exposes the utter fraudulent nature of the CRT’s anti-war posture. Indeed, the CRT has worked with Anticapitalistas to build the Madrid People’s Rally against the War association which will take part this weekend in the “anti-NATO” summit.

Ultimately, by joining hands with Anticapitalistas, Lupe and the CRT operate as a thinly disguised faction of Podemos itself. Anti-capitalists helped found Podemos in 2014 with Stalinist professors like Pablo Iglesias. The Anticapitalistas mayor of Cádiz, José Manuel González, supported the sale of warships to the reactionary Saudi monarchy because it “increases the workload in the shipbuilding industry in the Bay of Cádiz”.

Essential political lessons must be learned. Building genuine left opposition to the US-NATO war and social austerity requires building a movement in the European and international working class. This implies a conscious and determined break with the petty-bourgeois class orientation and anti-Marxist traditions represented by Podemos and its satellites like the CRT and the Anticapitalistas.