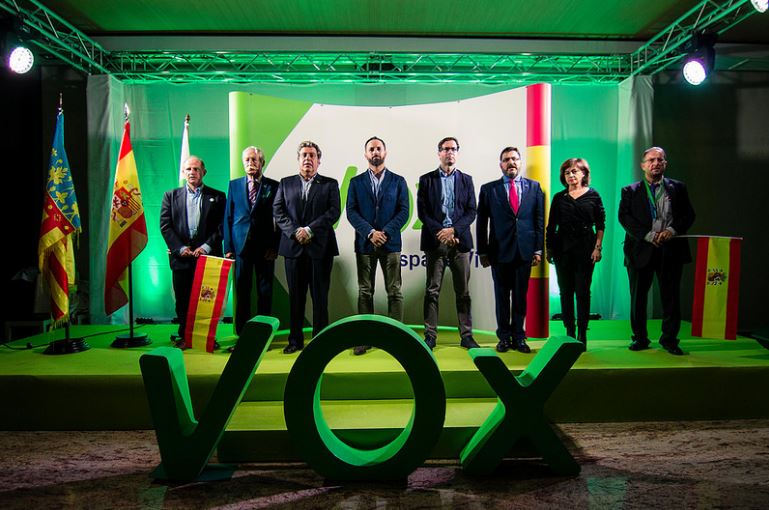 On September 7, the far-right Vox party filled the Spanish arena of Vistalegre with ten thousand nostalgic for the Franco regime, neofascists, Catholic extremists and reactionaries of all kinds. By putting on such a show, Vox had good reasons to choose this particular place, that is, the same arena in which Podemos held its own congresses. The far-right party has organized its rally here in order to display its own strength.

Vox wanted to boast of being the natural antagonist of the new left emerging from the anti-austerity movement of the 15M. And it succeeded. Since that event, the name Vox has appeared in the media, its leaders are in all the papers, and the party has started to be taken seriously by opinion polls (going from zero percent to around 5 percent in a matter of months. ).

The Vistalegre event marks a turning point in Spanish politics: the rise of a new far right, in a country once seen as an exception to the global fascist threat.

Vox was created in 2013 under the leadership of Alejo Vidal Quadras, former leader of Partido Popular (PP), the traditional party of the Spanish right. Quadras has set Vox the explicit objective of “rallying right-wing voters disillusioned by the policy of the PP”. However, this operation did not take off as well as expected, and this right-wing vote critical of the PP was instead taken up by alternative forces with a less sharp ideological profile, such as Ciudadanos or the UniÃ³n Progreso y Democracia ( although the latter has now almost disappeared).

This failure brought the first crisis to Vox; after having advocated closer relations with these other center-right forces, its founding president Quadras soon left the party, now reorganized on new bases. In September 2014, Santiago Abascal became party president (a role he still holds) and began to shift the party from more traditionally conservative positions to a new reactionary far right: a shift aligned with other global phenomena, and yet which also has unmistakably Spanish elements. characteristics.

Vox’s ideas join the reactionary wave that is spreading around the world. It expresses a powerful hatred against the traditions of the left; its anti-communism (“against the reds”) results in attacks against the fantastic threat of “cultural Marxism”. Its activists claim that the latter has colonized the minds of citizens, thus threatening the values â€‹â€‹that underpin the cohesion of Spain.

One of the main targets of Vox’s rage are feminist and LGBTQ movements, which she accuses of organizing brainwashing in lecture halls and in the media so-called hegemonized by identity politics. Affirming his own “politically incorrect” good faith and claiming to be the victim of “progressive censorship”, Vox paints himself in the colors of the white Spanish producer who dutifully gets up to work every morning, and who – whether boss or worker – is threatened by hordes of migrants who have come to steal his work.

The political left being exhausted and devoid of ideas going beyond the management of the system, Vox will try to position itself as a reactionary alternative to the existing political system.

However, Vox retains the fundamental traits of Spanish conservatism. The Spanish fascist tradition has never allowed itself too many â€œrevolutionaryâ€ hues. The founder of the Phalange EspaÃ±ola, JosÃ© Antonio Primo de Rivera, and General Franco have always sought to adopt a discourse that is more “reactionary” than “revolutionary”.

These figures have a lot to do with the fact that, from its origins, the main task of Spanish fascism has been to organize the counter-revolution against the left, in a country whose social formation means that the petty bourgeoisie and the middle classes have always been deeply linked to the political structure of the ruling class and the aristocracy. Apart from some small minorities, Spanish fascism has always been royalist, seeking in the king a traditional source of legitimacy that other European fascisms sought elsewhere.

Another ideological matrix that establishes a family link between Vox and this national-reactionary tradition is his defense of a legacy of hispanity (” Spanish “). Although few people still remember it, Spain was certainly once a world empire, which conquered America and half of Europe with blood and fire. If this heritage is difficult to claim, even in terms of development (the imperial monarchy was only a parasitic outgrowth, based on military blunder, religious colonialism and the underdevelopment of the productive forces), it functions as a version Spanish version of Donald Trump’s â€œMake America Great Againâ€, but with a much less material basis in current realities.

This is a neo-imperialism without imperial scope, which thus ends up directing these frustrated desires towards a sharpened Spanish nationalism in the domestic context: the Galicians, the Basques and, today, the Catalan separatists are – with the “Red” – the enemies par excellence around which the project of the Spanish right is built. Vox himself was able to take advantage of a certain disaffection with the traditional right, accused of being too “soft” towards an enemy within perceived as having been on the offensive through the recent period of turmoil in the Spanish politics.

What we do know for sure is that it is still too early to say how the Vox phenomenon will play out. Pollsters still give him relatively low scores (those who give him the highest percentages rank him at 5% of the vote). Still, her sudden breakthrough has already had immediate effects, hinting at a few of the ways she might develop in the future.

Vox grew up on the fringes of official politics. Its leaders have had to manage to draw attention to a political market already saturated with conflict and an oversupply of alternatives. But they have skillfully operated in the world of civil society, building organizations and think tanks with which to relate to various sections of the right.

The godfather of this world is the former Prime Minister JosÃ© MarÃ­a Aznar, a close admirer of George W. Bush, whom he accompanied in the catastrophic adventure in Iraq. Aznar and the entire neoconservative sector he represents spent years living outside the political front line, embittered as they were by the PP leadership under Prime Minister Mariano Rajoy (before he was dismissed from this office a few months ago by a motion of censure motivated by the left and the independence parties, thus making the Spanish Socialist Workers Party [PSOE], the historic Social Democratic Party, in power). And yet, even then, this neoconservative sector continued to work underground, in an ideological recomposition of the political right.

This place “on the edges” allowed Vox to appear with a protest speech, even if its leaders are people who come. . . of the establishment. For example, Aznar (who remains a member of the Partido Popular) himself called Vox leader Santiago Abascal “a talented guy”.

But Vox did not stop at forging legitimacy among influential right-wing circles. He also began to deploy a strategy of militant accumulation, attempting to penetrate working-class neighborhoods by stoking fear of immigration and opposition to leftist policies. For example, in Usera – long one of Madrid’s most popular neighborhoods – Vox used some very aggressive tactics, packing meetings at [left-wing] town hall and especially to attack with virulence the borough councilor Rommy arce, who is the first female migrant to become a city councilor in the Spanish capital.

The active mobilization of resentment against what Vox deems intolerable (a Marxist, feminist, working-class migrant woman in office) will remind many of the old tactics of the European far right, which mobilized the middle layers of poor neighborhoods to put all the Socialists who came to power in their place. This distinctly reactionary orientation limits Vox’s electoral potential, but also constitutes its very basis. According to pollsters, his voters are high-income white males; it has not yet succeeded in penetrating the electorates of workers, migrants or women.

Vox also had other, more immediate effects on Spanish politics. If in other European countries the very DNA of liberal democracies was based on the struggle against fascism, Spanish democracy was not formed by any similar birth process. This democracy was rather the fruit of a pact between the heirs of the dictator Franco and the forces of the left. For this reason, the right never condemned Francoism, but rather continued it. This means that Vox has a lot in common with traditional right-wing parties.

In fact, the young leader of the Partido Popular Pablo Casado – himself a protÃ©gÃ© of Aznar – has already winked at Vox several times in interviews, notably by refusing to call him a far-right party; he had no similar problem throwing all kinds of epithets at Podemos. Additionally, Vox’s breakthrough sparked radicalization to the right of the Partido Popular and Ciudadanos, which entered a spiraling competition to advance authoritarian measures against migrants, feminism, workers’ organizations and Catalan separatists. .

Until recently, Spain was one of the few European countries that the new far right had yet to reach. But Vox’s breakthrough marks the end of the so-called Spanish exception. Discontent with the system was expressed through the 15M austerity movement, Podemos and progressive local politics. But this new left has opted for a strategy of moderation, seeking a government pact with social democracy – a choice reminiscent of the failed experience of the French Communist Party in the 1980s under the socialist government of FranÃ§ois Mitterrand.

With the political left exhausted and devoid of ideas going beyond the management of the system (despite the existence of a powerful feminist movement and a dynamic movement for the right to housing, as well as nascent workers’ struggles), the far right represented by Vox trying to position itself as a reactionary alternative to the existing political system.

All is not lost: the forces also exist to prevent the growth of the global fascist monster, and to avert a catastrophe like those our brothers and sisters suffered in Brazil and the United States. But it cannot be denied that this monster has indeed arrived in Spain.