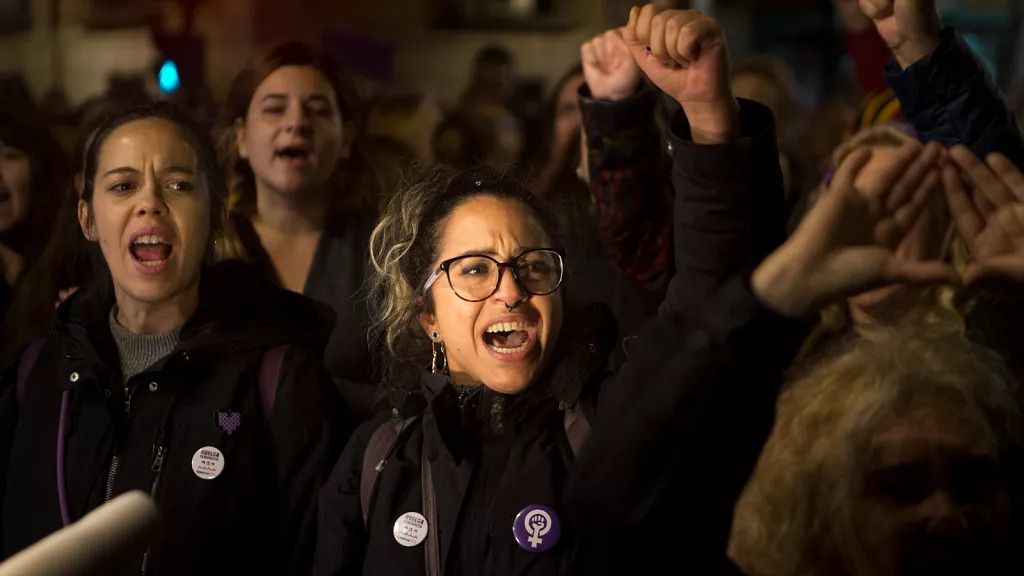 Spain is to review a new law to better protect victims of sexual offenses after a series of court rulings led to reduced prison sentences for offenders due to a loophole in the legislation.

The law came into effect last month, six years after what became known as the ‘Wolf Pack’ case in which five men raped an 18-year-old woman at Pamplona’s bullfighting festival, but first were given a lesser sentence. for the crime of sexual abuse.

The case sparked protests across Spain and led the government to change the criminal law on sexual offences.

Known as the ‘yes means yes’ law, the new legislation qualifies any non-consensual sex as rape, bringing Spain in line with 11 other European countries, including Britain, Sweden and Portugal.

The far-reaching legislation also dealt with sexual offenses against children and punished chat calls to women, and proposed the re-education of offenders.

However, lawyers for convicted sex offenders used a loophole in the law that allowed for a general reduction in prison sentences when new criminal legislation came into force in Spain.

When the law was drafted, it established minimum and maximum sentences and allowed sex offenders to seek retroactive sentence reduction.

In some cases, this meant that when the maximum sentence was imposed, it could be reduced by defense attorneys citing the new law.

Lawyers for the convicts sought to exploit this loophole in the law.

Before the law was passed, Spain’s General Council of the Judiciary, the governing body of the judiciary, warned that this could happen.

In general, when a new penal law comes into force, the principle is to apply more lenient penalties. Spain is considered to have some of the harshest sentences in Europe.

In the latest case, a man who was sentenced to eight years in prison for sexually abusing his 13-year-old stepdaughter has had his sentence reduced by a Madrid court to six years.

In Barcelona, ​​a 28-year-old man who raped a 60-year-old woman in his own home was sentenced to three years and ten months. The judges ruled that under the new law the sentence should be between two and four years.

Madrid judicial authorities told Euronews there were dozens of other cases in which sentences would be reviewed.

Maria Jesus Montero, Spain’s treasury minister, told the Senate on Tuesday that “after some sentences handed down, I think this issue needs to be investigated…because obviously it was not the purpose of the law that child sentences abuses could be reduced, quite the contrary.

Manuel Cancio Melía, a professor of criminal law at the Autonomous University of Madrid, said that when criminal laws changed in Spain, the idea was to reduce sentences in general, but prison sentences depended on the circumstances of each case. .

“I cannot comment on these cases because we will have to see what happens with this law. There have been reductions but also in some cases increased sentences,” he told Euronews.

“In some cases, sentences could be reduced if judges decide that intimidation or violence was not used.”

The prison sentence reductions have sparked a political row over a law championed by Spain’s leftist government as a way to give victims of sex offenses more protection.

“Misapplication of the law”

Ione Belarra, the leader of the far-left Unidas Podemos party, the junior coalition government partner that introduced the legislation, accused some judges of misinterpreting the legislation.

“Some of the judges in this country have stood in opposition to the coalition and in particular the Department for Equality…they are misapplying the law,” she tweeted.

Javier Maroto, the Senate spokesman for the conservative opposition People’s Party, has called for a review of the law next week in the Senate.

“Spanish people are angry at the reduction of sentences for assaults on women and children. This should never have happened. The criminals are rubbing their hands in joy.

Under previous Spanish sex laws, an attacker had to use physical violence or intimidation for an assault to qualify as rape.

One aspect of the new law classifies stalking or street harassment, or chatting up in a humiliating manner will become felonies instead of misdemeanors.

Gang rape is considered an aggravating circumstance that can lead to sentences of up to 15 years, a measure intended to deter these attacks which have shocked Spain.

Spain’s left-wing coalition government has sought to make sexual policy a cornerstone of its policies, but the opposition says this is not feasible.

In the Wolf Pack case, which takes its name from the WhatsApp men’s group, they were initially convicted of sexual abuse because the court found they did not use violence or intimidation and were sentenced to nine years in prison.

In 2019, three years after the initial attack, the Supreme Court overturned the initial verdict and found all five guilty of sexual assault or rape and handed down sentences of up to 15 years.

This was not the only case of gang rape to horrify the Spanish public.

Another case in Sabadell, a town near Barcelona, ​​sparked similar outrage and paved the way for law change.

In 2021, three members of a gang who raped an 18-year-old woman in a disused industrial unit in the Catalan city in 2019 were jailed for between 13 and 31 years.