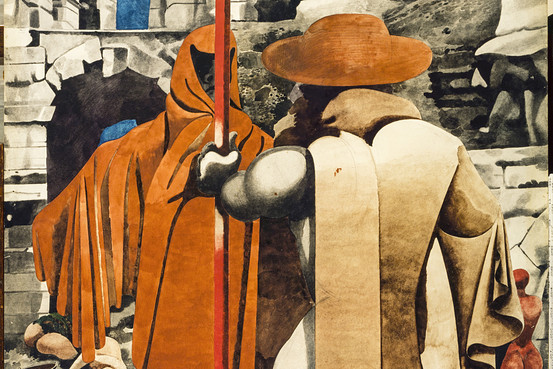 In October 1938, Picasso’s monumental â€œGuernicaâ€ was exhibited in London and impressed many spectators with its dazzling indignation. But British artists were already feeling anxious about the horrors of the Spanish Civil War. The brutal bombardment of towns across northern Spain had turned many in the UK against the ruthless nationalists of General Francisco Franco. Although the British government pursued a policy of non-intervention, the artists rebelled by declaring their support for the democratically elected Spanish Republic. The growing sense of protest became militant, and anger combined with compassion to produce works of art that still convey their intensity today.

Edward Burra was so traumatized by the outbreak of unrest that he fled Spain, grieved to witness the eruption of violence in a country he loved. In 1942 he told John Rothenstein, then director of the Tate Gallery, â€œit was terrifying,â€ describing â€œchurches on fire and pent-up hatred everywhere. Everyone knew something terrible was about to happen. Burra’s horror is vividly conveyed by a nightmarish watercolor, “The Watcher”, where two macabre and spectral apparitions clash in a location destroyed by a bomb. Then, in 1938, he produced a fierce image of “Medusa” showing teeth as she presides over the piled up corpses of men all strangled by ropes around their necks.

Historical Memory: A family demands justice in Mexico for the crimes of the Spanish Civil War | Spain