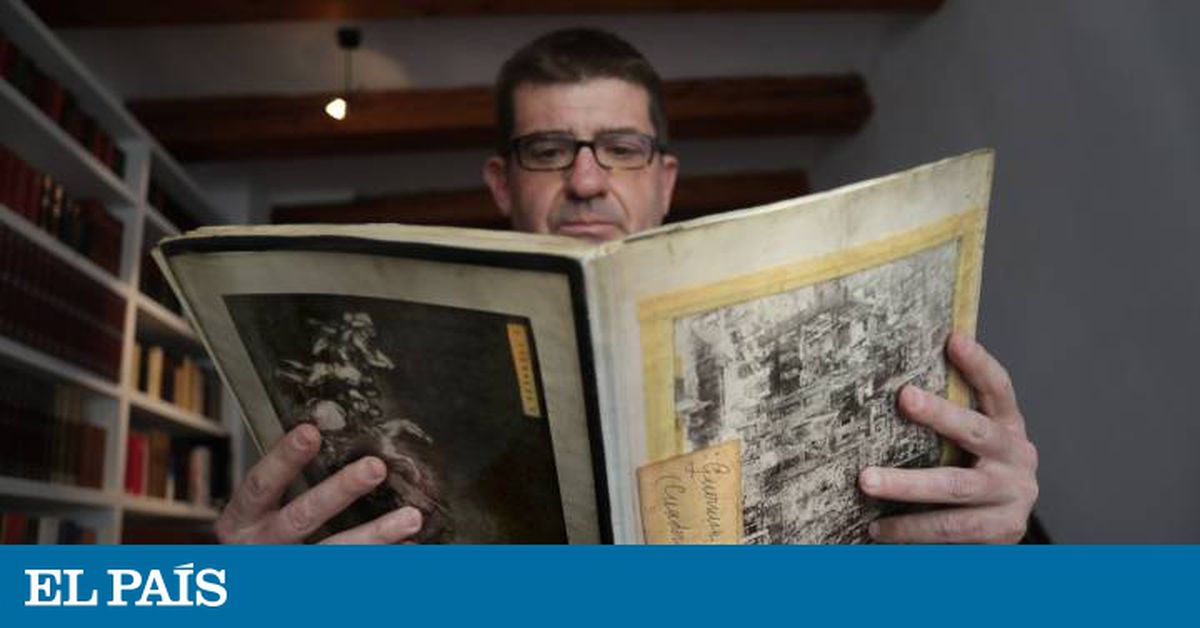 On a Sunday morning, at a stall in the crowded Rastro flea market in Madrid, collector and journalist Javier Monjas asked the dealer: “Excuse me. How much do you want for that? »

“Let’s see,” replied the salesman, eyeing the yellowed album Monjas held in his hands. “Give me €3 and we’re even.”

The album was produced by Antonio Calvache, a flamboyant and successful photographer of the 1920s and 1930s.

The album might smell of mold, but Monjas was interested in the wartime photographs that had been pasted to the pages and the accompanying scribbles, both full of romance and indignation. He was not yet aware of the true value of the book, handing over the €3 out of curiosity more than anything else.

“It wasn’t until I got home and started flipping through the book that I realized the value of what I was holding,” Monjas recalls touching the album – a collection of originals of Guernica as it says on the front. In addition to being a photographic testimony of the bombardment of the city, it is also the epitaph of a tortured soul, of a man full of regrets.

The album was produced by Antonio Calvache, a native of Cordoba, a flamboyant and successful photographer in the 1920s and 1930s, who was also a director, actor, bullfighter, poet and friend to the stars. He created portraits of popular actresses of the time such as Conchita Piquer and Margarita Xirgu, members of the royal family such as King Alfonso XIII and Queen Victoria Eugenia, and intellectuals such as the writer Benito Pérez Galdós and the writer and philosopher Miguel de Unamuno.

And in 1934, he photographed José Antonio Primo de Rivera, the leader of the Spanish fascist Falange party, in his Madrid studio on San Jerónimo street.

Join the nationalist faction during civil war (1936-1939), Calvache was appointed head of the photography and cinema section of the Falange within its propaganda service. But he had no intention of spending his life stuck in an office. He considered himself a man of action and his passion for photography and cinema, combined with his reckless courage and blind faith in Imperial Spain, led him to the front in northern Spain and, more specifically, to the Basque town of Guernica.

According to the album, he entered Guernica with the Brigades of Navarre two days after the Nazi German Lufftwaffe Condor Legion bombed the city at the behest of the Nationalist government of Francisco Franco on April 26, 1937. This bombardment turned the city into a symbol of Allied aggression with between 200 and 1,650 residents killed, depending on the source.

Antonio Calvache’s presence in towns such as Eibar, Bergara, Elgueta, Elorrio, Mondragón and Guernica in the spring of 1937 was documented in Francoist propaganda films such as Marcha Triunfal (Triumphal March) and Vizcaya Front (Vizcaya Front). In fact, two days before the bombing of Guernica, Calvache had signed a contract in San Sebastián with a businessman named Duro to make two documentaries about the war in the north. He had already made one on the Teruel front called El derrumbamiento del Ejército Rojo (The Fall of the Red Army).

There were rumors of a Guernica album, but its existence remained little more than a myth until Javier Monjas discovered it in Madrid’s Rastro. Signed by NA Villaespesa – the author insists this is a family surname and not a pseudonym – it is thought to have been composed in the late 1970s and bears witness to the bitterness and shock felt by Calvache on seeing the fallout. of what he called “a nauseating crime”.

Undeniable disappointment at having belonged to a faction capable of such a massacre: “The total silence contradicts me. The arms in the air rise in a painful spiral and the light seems to offer hope, a whiteness that the smoke blackens from below. Guerinica? My heart stops. I come out of… NOTHING? … Nothing nothing. GOD!… THEY TURNED GUERNICA INTO… NOTHING! […] EARTH BATTERED BY BLADES WEIGHING 100, 500, 1,000 KILOS.

Although he was a reactionary figure, a certain lack of prejudice meant that he had photographed many important Republicans before the war, such as the second Prime Minister of the Second Republic Manuel Azaña and Colonel Emilio Buenoa, who was responsible for the Republican defense of the Vallecas party. of the capital.

And then there was the incriminating episode of November 28, 1939, when the body of José Antonio Primo de Rivera arrived on Gran Vía Avenue in Madrid after being carried for 10 days by Falangist volunteers from Alicante. The procession passed the photography studio of a man called Alfonso who had been a Republican sympathizer, a friend of Azaña and a soldier on the Teruel front.

Aware of the risk he was taking, Alfonso left his studio to photograph the event. As he began to fire the first shot, he was recognized by a group of Falangists who began to shout, “You! You red bastard! At that point, Calvache arrived with his camera and berated the bullies, who backed off. He then turned to Alfonso and said, “For crying out loud, Alfonso, what are you doing here?” To which the grateful Alfonso replied: “Nothing. Take pictures.” Calvache turns against the Falangists and tells them: “No one touches this man! And he takes Alfonso home.

Unfortunately, such incidents came at a price, and Calvache used the album to address his own disgrace. “Salamanca,” he writes, “was the kind of paradise where you had to pay for fruit. Our last 1000 pesetas were taken by the customs officers to check if they were red or white… and Franco didn’t even invite us to sit down.

As Monjas points out: “And that’s what happened to someone who ran the Phalange propaganda machine! Instead of being a war hero, he ends up like a vermin in the eyes of the regime and goes to live in Tangier for some unknown reason. He is clearly very bitter about Franco.

Calvache’s fortunes were never to improve. At the end of his life, he was selling photos at the Rastro, at the entrance to the Prado and in Madrid bars, just to have something to eat. He and his beloved wife, Aurelia Wandosell, would end up living as tramps surrounded by bags of garbage inside their sprawling apartment at 49 Atocha Street.

He never renounced his Falangist ideals, but his disillusion with Franco is such that he speaks of Guernica in some of the last paragraphs of the book in these terms: “Red, black, blue, white, are become the same thing: pain. “It’s the voice of a disillusioned fascist.

Juan Miguel Sánchez Vigil, a lecturer at Complutense University in Madrid, got his hands on 2,500 photos of Calvache after his death in 1984. He was warned and acted quickly before Madrid’s sanitation department n intervene to empty their house and throw away the photos. with all the trash piled up in a nearby dumpster.

After some research, Sánchez Vigil was able to organize an exhibition of Calvache’s work at the Conde Duque Cultural Center in Madrid in 1994. He then compiled a book titled Through the Espejo (On the other side of the mirror) based on 137 humorous and tragic photos taken at different times in Calvache’s career. Much of its collection was then turned over to the National Library to which, as Sánchez Vigil says, it truly belongs.

“Both had lost their minds,” Sánchez Vigil recounts of the last years of Antonio Calvache and his wife Aurelia Wandosell. “I met the doormen at 49 rue Atocha, the building where they lived. They told me that one day an order came from the royal family that the couple should never want for anything. The king and queen had invited Antonio Calvache to the palace to photograph them on several occasions in the past. So they arranged for food to be brought to them every day. The Red Cross would arrive with food and leave it for the doormen to take to the apartment. Until one day they knocked and knocked and no one answered. Firefighters intervened to find Calvache dead and his wife on the ground surrounded by garbage bags, clothes and photos.

Aurelia Wandosell died in 1998 in a retirement home. They had no children. Their only living relative was the niece of one of his cousins ​​who had lost contact with them a few years earlier.