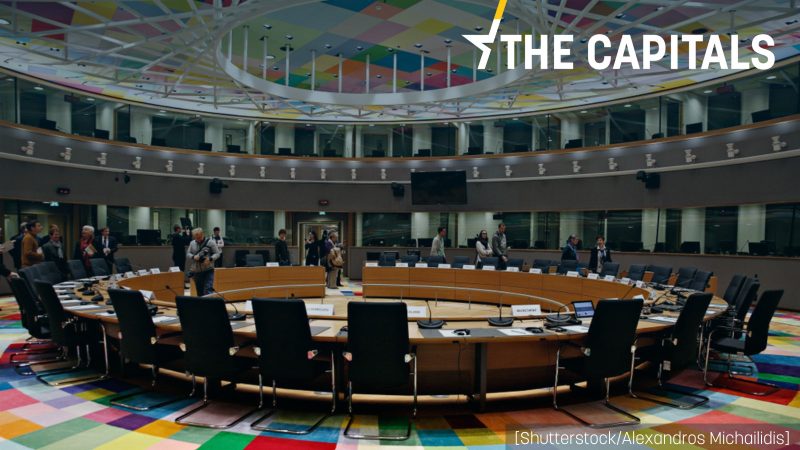 Before you start reading today’s edition of Capitals, be sure to take a look at European food businesses threatened with closure as they buckle under the pressure of the energy crisis by Natasha Foote.

Today’s edition is powered by AWS

How are organizations successfully managing compliance in Europe? What are the requirements for cross-border data transfer? AWS experts Esther Stringham (AWS Legal) and Hans Bos (AWS Security Assurance) dive deep into both topics.

The centre-right European People’s Party (EPP) is seeking a chance to regain the upper hand in the European Council in Sunday’s Swedish elections, where its majority could hinge on cooperation with Sweden’s far-right “normalized” Democrats. Read more.

Commission to introduce cyber requirements for Internet of Things products. The Cyber ​​Resilience Bill presented next week will impose basic cybersecurity standards for all connected devices and stricter conformity assessment procedures for critical products, according to a draft seen by EURACTIV. Read more.

The EU provides a “revenue cap” for electricity companies, mandatory electricity savings at peak times. An EU bill introduces mandatory demand reduction targets for electricity consumption for the first time and imposes “a revenue limit” on power companies making windfall profits from the energy crisis, according to a leaked proposal seen by EURACTIV. Read more.

Feed a snake that will bite us. EURACTIV’s poll this week showed that most of our readers believe that a new tendency for the European centre-right (EPP) to join coalitions with far-right parties will ultimately lead the EPP to adopt more extremes. Read the survey.

EU institutions, Macron sees “social issues as secondary”, says a leading French trade unionist. Trade unionist Philippe Martinez calls for a European campaign for higher wages because for President Emmanuel Macron and the EU, it is “the market that comes first” and “the social comes second”. Read more.

Russian gas price cap “insufficient” for Belgium. Belgian Energy Minister Tinne Van der Straeten has called for a ‘more decisive’ approach by the EU to the energy crisis, saying on Thursday that Belgium would not settle for a cap on Russian gas prices uniquely. Read more.

EPP: Polish plans for resolving German war reparations are “contradictory”. The centre-right of the European Parliament has not received a draft from the conservative ECR to table a resolution regarding German WWII reparations to Poland and finds the decision “contradictory”, EURACTIV.pl has learned. Read more.

Czech minister calls for pressure on Turkey over migration. Pressure on Turkey must be exerted on the increasing number of Syrian refugees arriving in the EU from this country in recent months, said Czech Interior Minister Vít Rakušan. Read more.

The Slovak Ice Hockey Federation mocks Putin’s league. The Slovak ice hockey federation has decided that it will not ban players under contract in Russia from playing for the national team, unlike its Czech counterpart. Read more.

bulgarian president Lukoil lobbies to lower fuel prices. Bulgarian President Rumen Radev on Thursday hosted a meeting between representatives of his caretaker government and the head of Lukoil Bulgaria, Vadim Vorobyov, during which fuel prices were discussed. At a time, the The Russian company expressed concern about the European embargo on Russian oil. Read more.

Croatia unveils plan to cap energy and food prices. The Croatian government on Thursday presented a crisis package for citizens and businesses, including a cap on basic food and energy prices, calling it “strong, fair and comprehensive”. Read more.

Record spending foreseen in Slovenia’s revised budget. The Slovenian government has adopted a revised budget for 2022 increasing revenue by around €1 billion to €12.54 billion and spending by around €600 million to a record €14.6 billion. euros. Read more.

Lajčak, Ploetner, Bonne to relaunch the Belgrade-Pristina dialogue. The EU mediator, Miroslav Lajcak, and the envoys from Berlin and Paris, Jens Ploetner and Emmanuel Bonne, are going to Pristina and Belgrade on Friday to “invigorate the dialogue, generated by the agreement on personal documents”. Read more.

Albania announces energy saving measures and higher costs for large users. The Albanian government presented its energy-saving measures on Thursday, which include a limit of 800 kilowatt hours (Kwh) per month for families who want to avoid paying a higher tariff for electricity. Read more.