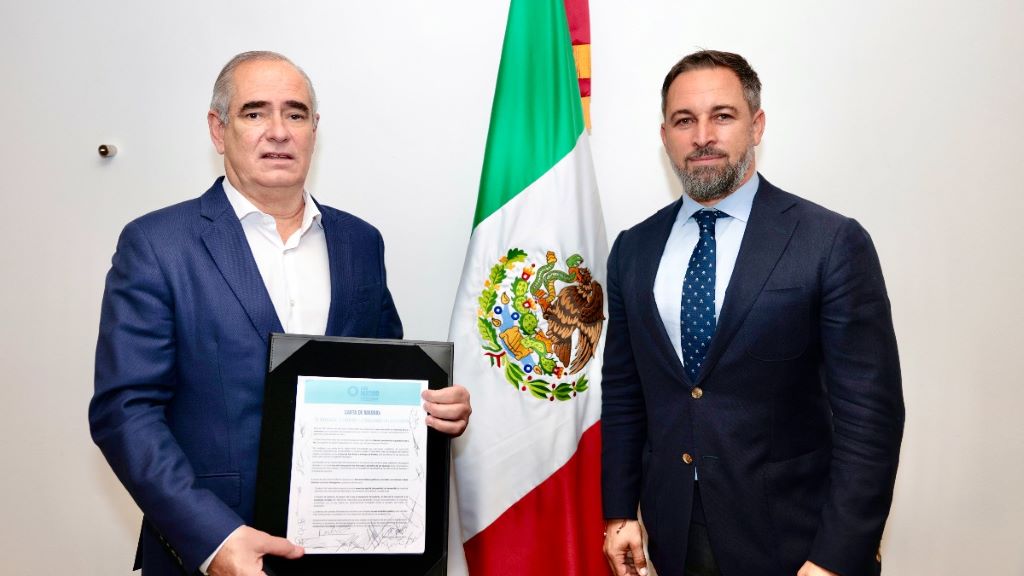 The occasion of the meeting, held in nothing less than the Senate building itself, was to sign the Madrid letter: a sort of Cold War manifesto urging the parties to liberate Latin America from the â€œcommunist-inspired totalitarian regimesâ€ which, according to the letter, are spreading their â€œcriminal and ideological projectâ€ across the region in an infamous attempt to subvert liberal democracies and the rule of law.

The visit’s backlash was immediate and fierce, so much so that the senators who happily took their photo with Abascal one day spent the next day frantically trying to distance themselves from their own event. After initially denying that any of its members participated, the PRI changed air to insist that everyone who was there went of their own accord.

The PAN, for its part, issued a press release insisting that the joint letter was by no means a “political agreement” but rather a simple text in which like-minded people agreed to work together. . Vox, meanwhile, gleefully undermined synchronized backpedaling by posting information about the meet and attendees on his website.

For the unfortunate opposition of the nation, its gathering now you see me now you do not represent a new hollow, all the more incredible since it has fallen into the hands of a party which, alongside its racism, its discrimination and homophobia, takes particular pleasure in glorifying Spanish conquest of the Americas.

Then again, rushing into the arms of foreign powers has been a conservative tradition in Mexico that dates back at least to its call for foreign intervention following the Reform Wars of the 19th century, which culminated in the short-lived Habsburg dynasty. by Maximilien I. And the tradition is very much alive. In the past year and a half alone, the President of the Employers’ Confederation of the Mexican Republic, Gustavo de Hoyos, has denounced AMLO’s “irrational” decision-making to the King of Spain; commentator Jorge SuÃ¡rez-VÃ©lez lamented that the failure of the United States to intervene to arrest the Mexican president had left them alone; and the opposition alliance tried to appeal the midterm elections to the Organization of American States (OAS) in Washington.

For the PAN in particular, its alliance with Vox represents a kind of homecoming. Founded in 1939, the National Action Party did not hide its fascist sympathies in the first years of its existence. Indeed, one of the party’s founders, Aquiles Elorduy, was also the director of the pro-Nazi anti-Semitic magazine. The reaction, who counted among his collaborators distinguished ancestors of the party such as Manuel GÃ³mez MorÃ­n, Gustavo Molina Font, Manuel Herrera y Lasso and Pedro Zuloaga.

It wasn’t until the Axis fate in WWII turned sour that the party began to change its tone. And despite attempts by recent generations of house historians to reinvent the origins of the party and its founders into a noble gathering of humanists, it is evident that the early NAPs had more in common with the Phalanx than with the Democrats. -Christians they have since claimed. to be.

If there was any doubt that the DNA of the far right remains alive and well in Mexican conservatism, the leader of the opposition alliance Va por MÃ©xico, Claudio X. GonzÃ¡lez, has made it clear. in October. In a threatening tweet, GonzÃ¡lez, son of President Kimberly-Clark de MÃ©xico, warned that the â€œso-calledâ€ Fourth Transformation would end â€œbadly, very badlyâ€. He continued:

Note should be taken of all those who, by action or omission, have encouraged the actions and deeds of the current administration and have harmed Mexico. Let no one forget who sided with populist and destructive authoritarianism.

With memories of dictatorships and disappearances so fresh in Latin America – from Operation Condor in the 1970s to the US-funded counterinsurgency in Central America in the 1980s, to Mexico’s own bloody history of the Tlatelolco’s place in the jungles of Chiapas – GonzÃ¡lez’s call for a blacklist to root out enemies when the opposition regains power has been barely subtle.

Certainly, part of what lies behind this slip of the mask is sheer desperation. Things haven’t gone well for Claudio Jr’s political project lately: in addition to losing the midterm elections, Go to Mexico withdrew from challenging AMLO in a 2022 recall election after saying earlier he would, faces a possible coalition split over the president’s proposed energy reform, and faces a provision in this year’s budget that limits the tax deductibility of donations to the same foundations it uses to fund its activities.

As for the PAN, it is bleeding Senate members, while its own party chairman has been caught on camera admitting he is set to lose five of six gubernatorial races next year. But in light of regional history and the global resurgence of far-right movements, the threat takes on another dimension.

Just days after GonzÃ¡lez’s explosion, Congressman from the conservative coalition, Jorge Ãlvarez Maynez, called Assistant Secretary for Prevention and Health Promotion Hugo LÃ³pez-Gatell a “killer” from the podium of the Chamber of Deputies, ending with a “we” inspired by the Mafia come back for you. Lest it be seen as an isolated explosion, PAN Congressman Martha Estela Romo CuÃ©llar then presented LÃ³pez-Gatell boss Dr Jorge Alcocer Varela with a fake gravestone showing his date of birth but with a question mark next to the date of death; Estela Romo then asked Alcocer how he wanted him to be remembered in his epitaph.

Perhaps more than latent fascism, the stunts have simply shown the raw and desperate nature of a right unaccustomed to being on the fringes of a system it sees as its personal property. But it is from such desperation that fascisms often arise.

No consideration of the Mexican far right would be complete without the missing piece of the puzzle: the ultra-Catholic secret sect known as El Yunque (the Anvil). Unlike other made-in-Mexico religious groups such as the Legionaries of Christ, who sought to expand their influence by cultivating influential figures, El Yunque, from its conception during the height of Cold War paranoia of the 1950s. , devoted himself to direct political objectives. .

According to journalist Ãlvaro Delgado, who has written extensively on the subject for more than two decades, El Yunque’s goal is nothing less than to seize power and install a theocratic regime, to evangelize the institutions. of the State and to ensure that its program is imposed on the nation. . This is what he attempted to accomplish by preparing prospects for infiltration of political parties, civic organizations, etc., starting with the hegemonic PRI, but moving from horses to the emerging PAN in the 1970s. When Vicente Fox won the presidency in 2000, dozens, if not hundreds of yunquistas flooded the federal government, some, like Home Secretary Carlos Abascal, occupying positions of power in the cabinet. The influence continued and was consolidated during the subsequent administration of Felipe CalderÃ³n.

Far from being a purely national phenomenon, El Yunque’s influence has spread to the rest of the world. In August, a multinational journalistic investigation based on a series of new Wikileaks releases found that, through a series of allied organizations with names such as Hazte OÃ­r (HO) and CitizenGoh (CG), the organization has penetrated the societies and governments of some fifty nations.

HO and CG, in turn, have partnered with the Howard Center for Family, Religion, and Society (now the International Organization for the Family) to sponsor the World Congress of Families, an annual gathering of the international Christian right whose most recent edition of speakers such as Matteo Salvini of the Northern Italian League. But despite all this international exposure, Mexico remains one of the network’s main centers of operations and fundraising.

As for the PAN and Vox, both tried to deny that their parties were infiltrated by El Yunque; Vox even took advantage of his breakup with Hazte OÃ­r to place an unconvincing light of day between the party and the organization. Ironically, although Vox seeks to expand his ideological reach in Latin America by playing the leadership role in what he awkwardly calls “the Iberosphere,” the stronger influence may well flow in the opposite direction. : The party’s dizzying success allowed a Mexican secret society to penetrate the upper echelons of Spanish politics in a way it would never have dreamed of before.

A far-right takeover in Mexico seems unlikely anytime soon: AMLO is popular, the social programs it has launched are new, the atrocity of recent administrations remains in mind, and the opposition is almost singularly incompetent. Moreover, the Mexican public, veteran of centuries of brutal ecclesiastical interference in political affairs, hardly needs to be convinced of the need for a firm separation of church and state.

But things can change: another president will take office, once new programs soon become the norm, the memory of previous administrations will fade and the opposition will at least learn something. It is then that a new strain, an amalgamation, perhaps, of the Catholic far right with more recent influences from the burgeoning evangelical movement, could threaten to take hold – made all the more possible by the inequality of wealth and a galloping climate crisis.

All of this should represent a call to arms for the ruling MORENA: while a pragmatic approach provided enough initial gains to brag about, in the absence of a movement keen to dismantle the power structures of the elites in all their overlapping spheres, it could find itself blown off the map by the hurricane that may still be brewing offshore.

Spain faces its past in the mass graves bill. Will this be enough?

It happened today – this day in history