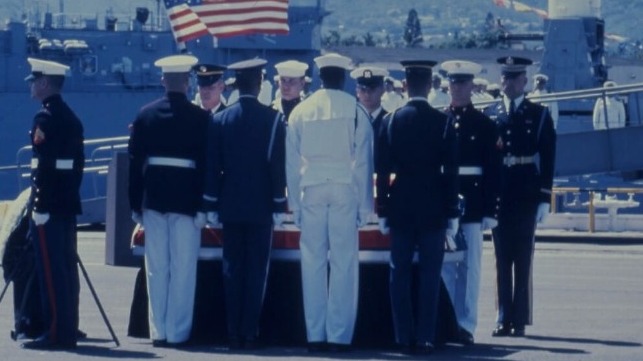 On May 27, 1958, the coast guard Ingham discreetly escorted the navy destroyer USS Blandy up the Potomac River, towards Washington, DC Blandy carried the remains of two unidentified American soldiers, one from World War II and the other from the Korean War. They were to be interred in the Tomb of the Unknown Soldier at Arlington National Cemetery.

Since its creation in 1921, the tomb has become a symbol of ultimate bravery and sacrifice in times of war. In December 1920, New York Representative Hailton Fish, a World War I veteran, proposed the idea of ​​a grave for an unknown soldier in Arlington, Virginia. Great Britain and France had already buried their unknowns on November 11, 1920, respectively at Westminster Abbey and at the Arc de Triomphe. After more than 100,000 American casualties in a war that encompassed the world, it seemed only natural that the United States would have its own nationally recognized memorial.

Very little is known of the Coast Guard’s role in the 1921 ceremony. The service was still in its infancy, after the U.S. Revenue Cutter Service and the U.S. Life-Saving Service merged in 1915 to form the Guard modern coast. Coast Guard Commander William Reynolds walked in the procession toward Arlington alongside Supreme Court Chief Justice William Taft, who had served as President of the United States from 1909 to 1913. Another unidentified Coast Guard Cutter walked with President Warren. Harding’s entourage.

In June 1946, a year after the end of World War II, Representative Charles Price of Illinois sponsored a bill that became Public Law 429, authorizing the burial of an unknown World War II serviceman World at the Tomb of the Unknown Soldier. Two years later, on July 23, 1948, the Army gave the order to begin the formal selection process. After several changes, the selection ceremony was set for May 26, 1951; however, the outbreak of the Korean War put this on hold.

Price then sponsored another bill authorizing the selection and burial of an unknown Korean War service member at the Tomb of the Unknown Soldier. This became Public Law 975 when it was passed on August 3, 1956. It was decided to build two new crypts, rather than graves, for the unknowns of World War II and the Korean War, and work began in November 1957.

In May 1958, the Ingham and the Blandy arrived at the Washington Navy Yard, where they were greeted by a solemn marching band and a large number of active duty members from all armed services. The coffins of the two unknown soldiers, accompanied by an honor guard, were brought ashore in a ceremonial area in preparation for the official burial ceremony the following day. Five Coast Guardsmen served as porters, including Quartermaster First Class Lennox Johnson, stationed in Norfolk, Va., Boatswain’s Mate First Class Joseph Knoll of the Coast Guard icebreaker west windand aviation machinist’s mate Joseph Fachko of Coast Guard Air Station Salem, Massachusetts.

Johnson, a native of North Carolina, had served in the Navy during World War II, before enlisting in the Coast Guard in February 1949. Being chosen as the Coast Guard pallbearer for the Tomb of the Unknown Soldier was quite an honor. for him. Years later, he would visit the memorial several times with his grandchildren, watching the changing of the guard and each time recounting his role in the 1958 ceremony. He retired as a lieutenant commander in 1974 after serving during the Korean War and the Vietnam War, moved to Florida and became an avid gardener. When visiting his grandchildren in the summer, he would walk with them through the rows of vegetables and tell stories of his youth and military service. He died in 1998 at the age of 72 and is buried at the national ceremony in Arlington, but his legacy lives on in his granddaughter, Lt. Cmdr. Michelle McNally. Her stories had impressed her so much that she enlisted in the Coast Guard in 2004. Today, she is a lieutenant commander like her grandfather and serves as the commanding officer of the Coast Guard’s Cryptologic Unit in Washington. , DC.

Born in Buffalo, New York, to Russian-Austrian immigrants, Fachko enlisted in the military at age 33 during World War II, before transferring to the Coast Guard. He was stationed at Coast Guard Air Station Salem from December 1953, where he rescued survivors of the infamous July 1956 collision between SS Andrea Doria and MS stockholm. Fachko was actually a last-minute replacement at the May 1958 ceremony for another Salem crew member who had a family emergency. He died in 1994 at the age of 79.

In 1973, Congress authorized the burial of a Vietnam War casualty at the Tomb of the Unknown Soldier. Due to bureaucracy, 11 years passed before this took place and the deceased soldier was selected, an event that took place on May 17, 1984 at what is now Joint Base Pearl Harbor-Hickam, Hawaii. . The coffin was placed on the Navy destroyer USS Brewton and escorted by the Coast Guard Cutter Stories for the trip to Naval Air Station Alameda, Calif., arriving May 24, 1984. The casket was then taken to Travis Air Force Base, about 40 miles north, to rest until the next morning, when it was airlifted to Washington, D.C.

The Vietnam Unknown was displayed in the Rotunda of the United States Capitol for three days, and thousands of Americans paid their respects. President Ronald Reagan presided over the official burial in Arlington on May 28, 1984. However, in 1998 the body was exhumed and identified as the remains of Air Force Lt. Michael Blassie. He was reinterred at Jefferson Barracks National Cemetery in St. Louis, Missouri, and the unknown Vietnam War crypt remains empty to this day.

Nora L. Chidlow is an archivist for the United States Coast Guard.

The views expressed here are those of the author and not necessarily those of The Maritime Executive.