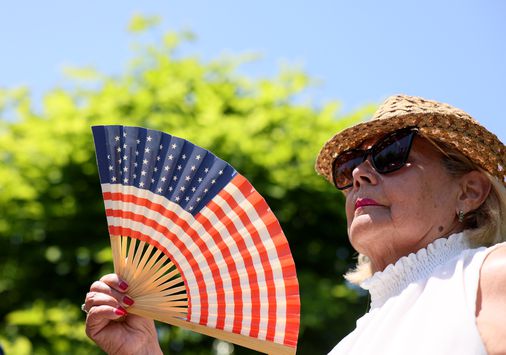 “Memorial Day is a day of remembrance and reflection, and a time to come together to honor those we love who gave their lives for this great nation,” Baker said, according to a statement. “The service and sacrifice of these heroes will never be forgotten, and we are forever grateful for their acts of courage and bravery.”

After two years of largely virtual Memorial Day commemorations, Monday’s in-person ceremonies allowed people to look each other in the eye while sharing their memories, or offer a comforting touch while wiping away a tear.

Mayor Brian A. DePeña and U.S. Representative Lori Trahan joined other community members at the city’s Bellevue Cemetery to remember Rosario Pichardo and other service personnel who died.

DePeña and Trahan laid a wreath at the foot of a cemetery pole. Members of the 6th Massachusetts Regiment Infantry raised flags aloft and stood to attention before the ceremony.

At one point during the memorial, Andy Jimenez was moved to tears before authorities presented him with a plaque honoring his son, US Army Staff Sergeant Alex Jimenez, who was killed in Iraq in 2008.

Another Gold Star relative, Alexandra Santos, reached out and placed her hand on her knee as Jimenez wiped away her tears. Santos’ own son died last year while training at Parris Island in South Carolina.

Trahan, in his remarks, reflected on the bravery of the nation’s veterans.

“They and so many others knew the weight of their decision to volunteer. They knew the risks and they served anyway,” Trahan said during his remarks, which were broadcast by WCVB.

Later that day, at the ceremony honoring Boston’s Puerto Rican veterans, Wu, who spoke in English and Spanish, highlighted the important role members of the Puerto Rican community played in the defense of the nation.

“It is extremely important for us as a city to present a reminder and reflection of our entire community in the history of this country,” Wu said in remarks shared on social media, and noted their contributions for “ guarantee our freedom and freedom.”

She also expressed her gratitude to veterans on social media on Monday: “To all of our military in Boston and beyond: thank you.

The grounds of the monument were decorated with American and Puerto Rican flags. Baker, at one point during the ceremony, stood by the monument and lowered his head.

Boston City Councilman Ricardo Arroyo said the memorial has special meaning for him – members of his family have served in every US engagement since World War I.

“Honoring those who have given their all means caring for their families and our veterans by ensuring they receive the services and care they deserve,” Arroyo wrote on Twitter.

Council Speaker Ed Flynn, a U.S. Navy veteran who also attended the ceremony at the Puerto Rican Veterans Memorial, reflected on the veterans and their families.

“We remembered and prayed for our #GoldStarFamilies and the American military who made the ultimate sacrifice for our nation,” Flynn wrote on Twitter.

In Charlestown, crew members of the USS Constitution read the names of Sailors and Marines who died while serving aboard the ship. Beginning at noon, the ship fired a 21-gun salute in honor of her fallen crew members and fired one shot every minute for 21 minutes.

Nicknamed “Old Ironsides” – during combat you could see cannonballs bouncing off her wooden hull – she is the oldest commissioned warship in the world and saw action in the War of 1812.

“There’s no place more appropriate to honor Memorial Day than here,” a crew member said during Monday’s ceremony. “This ship is a monument to our early days in the Navy and a living memorial to those who served at a time when America’s future was fragile.”

Jessica Rinaldi and Erin Clark of Globe staff contributed to this report.

John Hilliard can be contacted at [email protected]