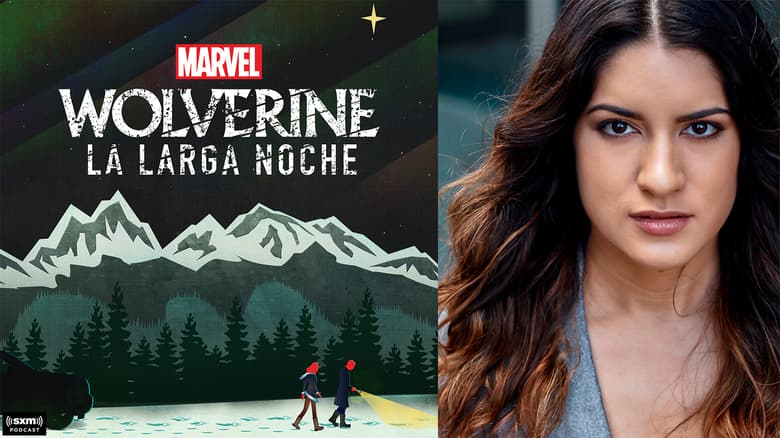 Marvel Audio Development Director Brad Barton said, â€œNot only can we invite Spanish-speaking Marvel fans to enjoy the dark world that Writer Benjamin Percy created years ago for the original English version of the podcast, but if you already know “Wolverine: The Long Night”, it’s also an exciting opportunity to hear new approaches to the characters. “

Executive producer Jill DuBoff praised the cast, saying: “‘Wolverine: The Long Night ‘ was such a fun and enchanting show, it is a pleasure to be able to present it to a Spanish speaking audience in ‘La Larga Noche ‘, with some of the most talented actors. Hearing this show with these actors gave me chills, and I’m delighted that even more listeners can enjoy the adventure. “

Barton adds, “Alejandra did a fantastic job guiding Joaquin Cosio’s performances as Wolverine and the rest of the cast. It’s practically a different show from the original English podcast!”

We asked the director to “Wolverine: La Larga Noche”, Alejandra lopez, to describe what it was like to work on a project with many important firsts.

What was your first impression of “Wolverine: The Long Night”?

To be honest, I had no idea how big the world of audio series is. I remember listening to “Wolverine: The Long Night “ and thinking how alive and real it all sounded. And, above all, the richness of the scenario, which is the key to a successful project.

Which characters have marked you?

Even though Wolverine is the most famous character, I was impressed with Special Agent Sally Pierce. Our female protagonist. She is the backbone of this podcast! And I certainly didn’t expect that twist at the end. Brigitte Kali Canales, the actress who lent her voice to Pierce, put on a great performance and made my job as a director a lot easier.

Why did you want to tell this story?

I wanted to tell this story because it reflected how alike mutants and humans are. We meet a Wolverine who is on the road to redemption. Seeking atonement. A wolverine that is drunk to oblivion and spends most of its time alone. Benjamin Percy, the writer, said that while people know him best as a member of the X-Men, he’s not a team player. He’s more of an anti-hero than a hero, someone who does bad things for good reasons. What a beautiful antithesis. I connected with Logan because we’ve all been there. Oh, and the fact that this is Marvel’s very first Spanish-language podcast!

When you took on this project, did you already have an idea of â€‹â€‹what Wolverine’s story would look like in Spanish? For “La Larga Noche”, how many have been translated versus reinterpreted in Spanish?

I knew it would sound more passionate for sure. And the episodes will be longer in time. I told the Marvel producers (Jill du boff, Jasmine estrada and Brad barton) we Latinos savor our language. I was very excited to prove this to them. With all due respect, the first translations I received and read looked like robots translating material. It was cold and distant and sometimes I didn’t even understand the script. I would say that over 50% has been reinterpreted, especially in Mexican Spanish. It’s neutral Spanish in Hollywood.

I am Puerto Rican and although we also speak Spanish I recognized that we have different dialects so we had Rome Osorio help us and she did very well. During production I also asked the comedians if they felt comfortable with the lines and if not we would change it the same day.

How did the casting go ?

The casting was so much fun! I remember auditioning actors that I grew up watching when my mom gave me permission to start watching soap operas. Carla Hool and Marisa Freeman are awesome. I remember our first meeting and we were all on the same page from the start.

Were there any difficulties during check-in due to the current climate? How were you able to adapt?

The recording was going to be done remotely, but my instinct told me that the fact of not having the actors in the same place and without my advice so close was going to negatively affect the project. I knew Wolverine: The Long Night was successful and was recorded before the pandemic, meaning the cast and crew were together in the same space. I felt it was more difficult for me in that sense, but not impossible.

I expressed my concern to our The wave runners studios producer Mast Jenny Radelet and production manager Talia Shea Levin. Jenny agreed with me to the point that we decided to record our two main characters, Special Agents Sally Pierce and Tad marshall, in a studio in LA. They were in different cabins and so am I. Only a window separated us. But we were in the same space and the actors could listen to each other and react in real time. A special cry to This is Nathan Ruyle from Sound Design and Bobby howley to make it happen and keep us safe!

This is the first time that Marvel has produced a narrative podcast in Spanish. What did you hope to communicate to a Spanish speaking audience of Marvel fans?

A podcast can’t have subtitles, so getting my siblings to listen to their favorite mutant for the first time in their native language must have been a surreal experience. Joaquin cosio was so good! He was always open to my suggestions and implemented my notes perfectly, what the relationship between an actor and a director should be.

The Spanish language is spoken in twenty countries on four continents. It is one of the five most spoken languages â€‹â€‹in the world with more than 534 million speakers. Now if it’s not a strong market, I don’t know what it is. I did my research before the interview. Can Marvel then produce a TV show in Spanish, please?

We are very happy that this project is now available to the public. Is there anything else you would like to add about the direction of this project?

You and me both! Two things. I really appreciate the producers for confessing to me that Spanish is not their strong point and, therefore, for having completely trusted me for this project. I hope they are really happy with the result like me.

Second, correct me if I’m wrong, but I was told to be the fifth female director to direct a Marvel project and the first Latina to do so. To be part of history is a great honor and a great responsibility. All praise goes to God, not to me.

The empires that brought us here