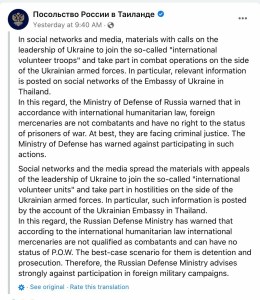 We have seen new reports of foreign volunteers joining Ukrainian forces, including Americans, to fight against the Russian invasion. It now appears a significant number of these volunteers in a modern version of Lincoln Brigade who fought fascism in Spain before World War II. The similarities to the Spanish Civil War are striking with fascists controlling the skies, using advanced weaponry and engaging in war crimes. At the time, Russia supported republican forces against fascism. Today, however, Russia declares that foreign volunteers are not considered “combatants” covered by the Geneva Conventions. It’s not true.

Russian embassies like the one in Thailand issue statements telling men not to join the fight or risk being branded “mercenaries”.

Of course, Russia has little credibility on any interpretation of international law today. The irony is overwhelming. Russia is now openly committing war crimes by attacking civilian areas with indiscriminate weapons and using prohibited weapons. These crimes are in addition to launching an unprovoked and unwarranted attack on a sovereign nation. Besides, Russia uses mercenaries like the infamous Wagner Group. It is also allegedly recruited Syrians fight in Ukraine.

Hypocrisy aside, the Russian government is wrong. Indeed, his suggestion to treat these foreign fighters as uncovered persons is itself a violation of the Geneva Convention.

Here is the statement from Thailand:

According to the Geneva Conventions, “the best scenario” is not “detention and prosecution”.

The President and the Government of Ukraine have officially calls for international volunteers join the Ukrainian army. They are part of the Ukrainian Defense Forces and receive Ukrainian training, uniforms and insignia. The Russian position amounts to saying that the French Foreign Legion would be treated as mercenaries because it includes non-French volunteers. The Legion opens its ranks forrecruits from around the world.”

Similarly, the approximately 16,000 foreign fighters are organized as part of the “Ukrainian Foreign Legion” and require a commitment of one year or more of service.

Although there are areas of ambiguity regarding private contractors and other participants in the conflicts, current definitions of covered combatants clearly and unambiguously reject the Russian position. Article 4 contains the key element of the definition of legal combatant status. Convention (III) relative to the Treatment of Prisoners of War, pt. I, art. 4 (August 12, 1949), 6 UST 3316.

Article 4(A)(2) also specifies that “militias and members of other volunteer corps…belonging to a Party to the conflict and operating inside or outside their own territory” enjoy the status of combatant and protections.

Under the Geneva Conventions and Additional Protocols, there is a distinction between combatants and civilians. The last term can include unlawful combatants, spies and mercenaries.

However, Article 45 deals with the “protection of persons who have taken part in hostilities” and states that any combatant captured is presumed to be a prisoner of war. Accordingly, if a foreign combatant is captured “he will continue to have that status and, therefore, to be protected by the Third Convention and this Protocol until his status has been determined by a competent tribunal”. Section 45 reaffirms the need for a court hearing on the status issue.

The four original Geneva Conventions do not deal with mercenaries. However, Protocol I describes this status as “foreign combatants recruited to fight in a specific conflict and motivated by the desire for private gain in excess of payment to the armed forces of the recruiting state”. There is also a 1989 International Convention against the Recruitment, Use, Financing and Training of Mercenaries.

None of these sources support the Russian classification of foreign fighters as mercenaries. Indeed, such definitions would work against Russian servicemen captured in countries like Syria.

Indeed, the Russians have long adopted these international volunteers in combat operations. One of the greatest such efforts was the group of Soviet volunteers who traveled, with government support, to China to fight in the Second Sino-Japanese War between 1937 and 1941. These soldiers wore civilian clothes and traveled to China to join their army. This included hundreds of pilots and aircraft.

The Russians were also foreign fighters of the Spanish Civil War. They were considered particularly essential to the defense of Madrid against fascists, including German forces.

This included a force of T-26 tanks under Captain Paul “Greize” Arman and Brigadier Dmitriy “Pablo” Pavlov. It also included dozens of Soviet I-15 fighter Tupolev ANT-40 bombers. Under Russia’s current interpretation, all of these men (called Soviet heroes) would now be treated as criminal mercenaries.

One could argue that it hardly matters as the Russians are breaking international legal principles and committing atrocities in the invasion. However, violation of the Geneva Conventions exposes military commanders to possible international charges and sanctions. The International Military Tribunal for the Far East (or “Tokyo Trial”) involved the prosecution of those responsible for the abuse of prisoners of war.

Article 86(2) of Protocol I was drafted in the light of World War II cases. It is intended to impose criminal liability on the commander if he knew or should have known that a subordinate was going to commit breaches of the conventions.

The most obvious figures who could be held responsible for such violations in Ukraine are Defense Minister General Sergey Shoygu and Chief of the General Staff General Valery Gerasimov. They are also liable to charges for war crimes committed in the pursuit of war against civilians.

The global legal community must speak with one voice to reject Russia’s interpretation of the Geneva Conventions so that there is no doubt about the knowledge of these commanders to commit such violations. When this war ends, there will hopefully be accountability to those responsible. However, we must make this record clear and unambiguous now if we are to uphold the rights of the victims of this invasion later.